A song of Schiehallion

Virginia Mills discovers how Royal Society Fellows Nevil Maskelyne and Charles Hutton calculated the density of the Earth using a Scottish mountain, at the cost of a bothy and a prized fiddle.

Our archive contains detailed information on the planning and financing of the expedition – the Royal Society was footing the bill, after all!

Readers of this blog may be familiar with the Schiehallion experiment. Sponsored by the Royal Society in 1774, it was an early attempt to calculate the density of the Earth, led by Nevil Maskelyne FRS, clergyman and Astronomer Royal from 1765 to 1811. 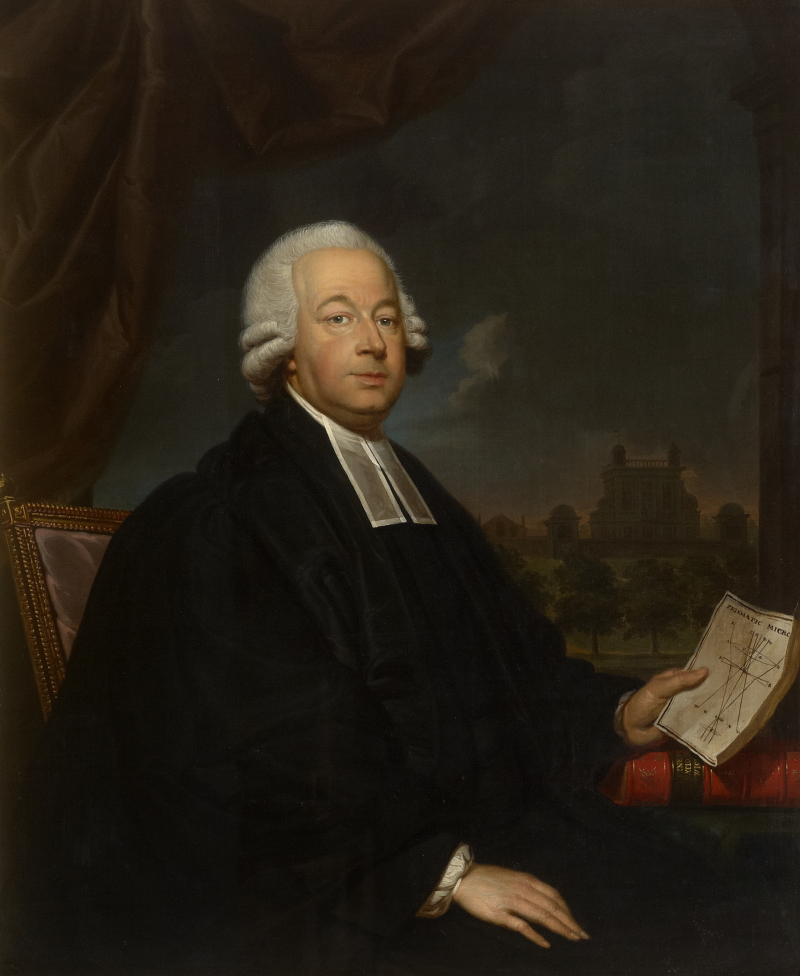 The Schiehallion experiment was named for ‘the fairy hill of Caledonia’, a mountain in Perthshire where, after extensive surveying of possible sites, the weighing of the world was conducted. ‘Schiehallion’ is anglicised from the Gaelic, Sìth (a name for fairy folk) and Chailleann (Caledonia).

The romantic moniker of ‘fairy hill’ hints at the rich folklore of the mountain, of which the experiment has now become part. I recently discovered that Schiehallion is not just famous locally for its scientific findings, when I stumbled across a song by traditional Scottish musician Iona Lane inspired by the experiment. Her song adds a chapter to the tale which I hadn’t seen in the official records of the Royal Society.

To find out what Maskelyne supposedly got up to when celebrating the conclusion of his experiment you can listen to the song Schiehallion here, or read on… 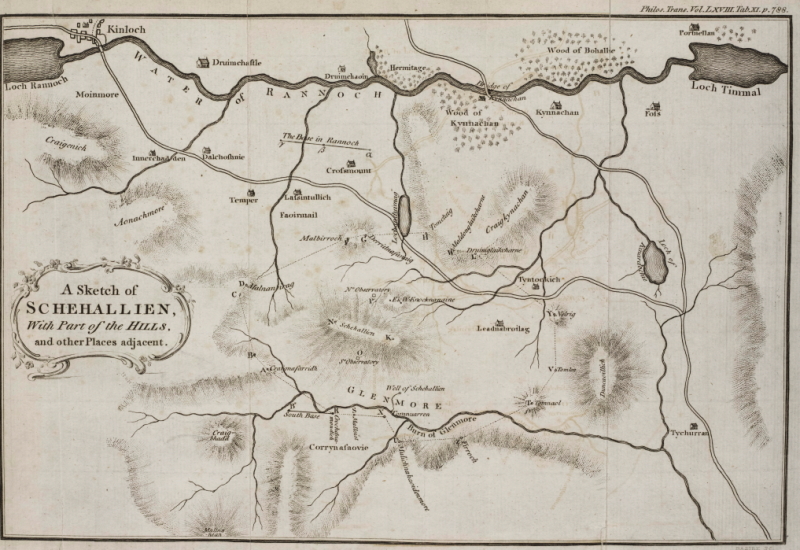 A sketch of Schiehallion and the surrounding landmarks, from Charles Hutton's paper on calculating the density of the mountain

Iona’s song begins by asking the central question Maskelyne wanted to investigate: ‘How do you measure the weight of the world, the Sun, the Moon and all our neighbours?’ More specifically Maskelyne reasoned that he could calculate the density of the Earth, and that this would help to extrapolate not only the mass of other celestial bodies whose size relative to Earth was known, but also shed light on the mysterious interior of our planet. Without the technology to investigate deep underground, many still subscribed to the ‘Hollow Earth’ theory, or even thought it might be composed of layers populated by other civilisations.

Maskelyne’s method for weighing a planet was, in his own words, to conduct ‘experiments of attraction’. This was based on an idea, previously proposed by Isaac Newton, that deviation in a plumb line or pendulum from its natural inclination towards the Earth’s centre of gravity could be caused by the competing gravitational attraction of a large nearby mass like a mountain. Furthermore, the angle of deviation could be used to determine the relative density of that mass (mountain) to the Earth. Then, if you knew the volume of your mountain, you could extrapolate the Earth’s density.

Newton thought you’d need something planet-sized for the attraction to be measurable, but it turns out that a 1083m mountain in Scotland will do the job. Maskelyne was able to determine that the Earth was nearly twice as dense as the mountain on its surface, debunking the Hollow Earth theory – read his findings here. With the help and corroboration of miner-turned-mathematician Charles Hutton FRS, they arrived at a determination of the Earth’s density within 20% of modern calculations. Not bad going. 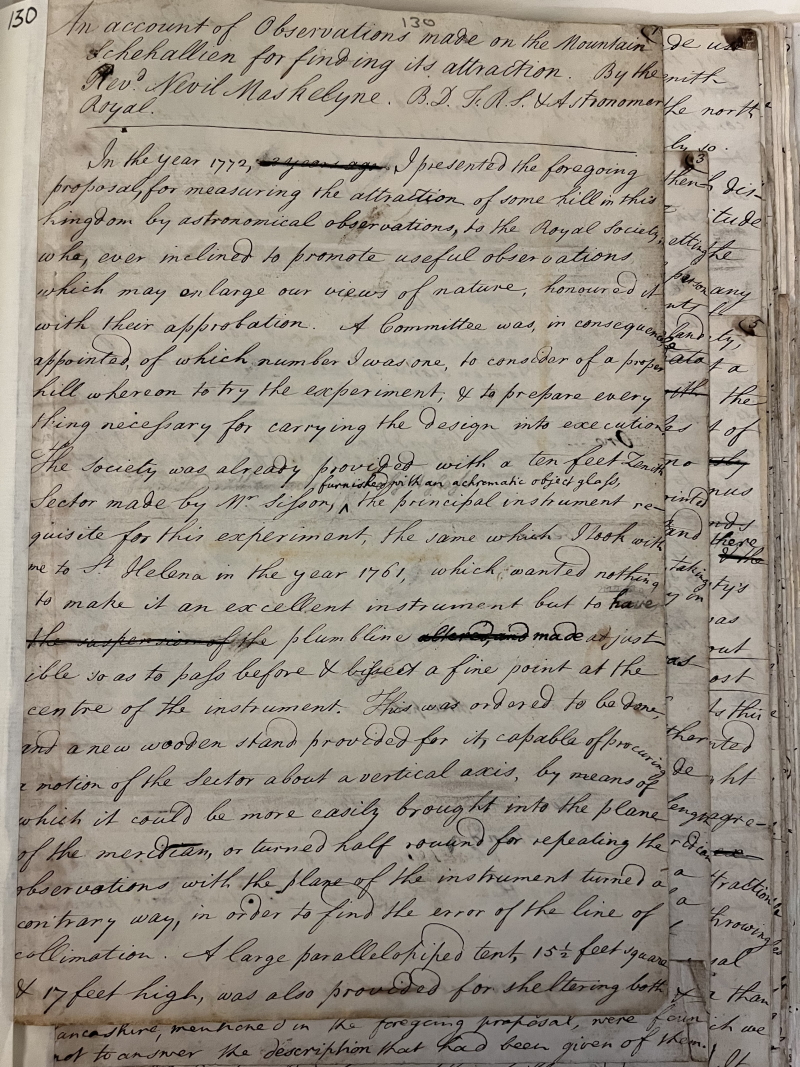 The line in Iona Lane’s song ‘Contour lines bind Schiehallion in my mind’ references the work done by Hutton, who carried out the calculations required to measure the volume of Schiehallion, a value key to the overall calculations. He wrote that:

‘The business was in a manner quite new, which laid me under the necessity of inventing and describing such modes of computation as should be proper to be applied in so important and delicate a business.’

One of his innovations was a way of representing altitude data from thousands of measurements taken by surveyors. To do this he created contour lines – now familiar to hikers and anyone who knows their way around an OS map, these lines join up points of equal altitude to create a visualisation of the relief of terrain.

Hutton’s results were published in the Philosophical Transactions of the Royal Society in 1778. A map from the original manuscript in our archive can be seen above; the published version, running to over 100 pages and including his raw data and calculations, is available to read on the Royal Society Publishing website here and is testament to his mathematical rigour and achievement. 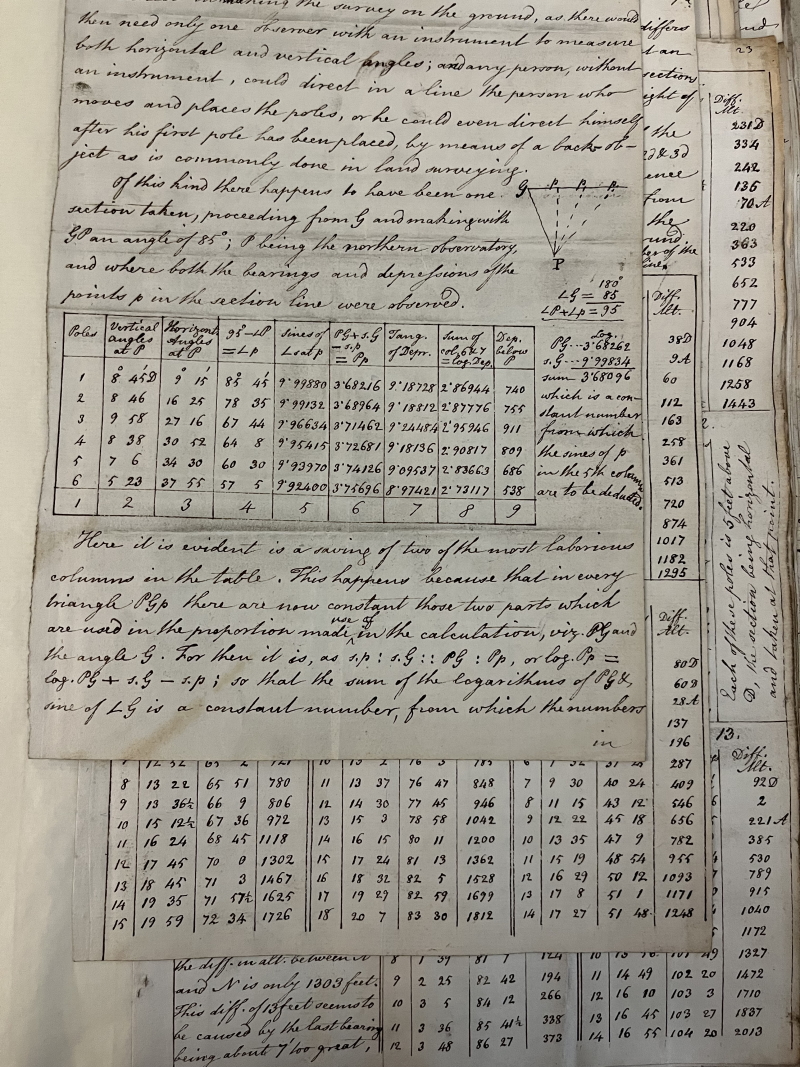 As well as the papers which became the published reports, our archive contains detailed information on the planning and financing of the expedition – the Royal Society was footing the bill, after all! Maskelyne spent over 16 weeks working on the mountain with a portable observatory, state-of-the-art equipment and provisions provided by the Society. This included a regulator or pendulum clock and Bird’s azimuth that were reused from the international Transit of Venus observations organised by the Society in 1769. There was also cash left over from King George III’s support of that expedition. Notwithstanding this recycling, the extent of reconnaissance and instruments required meant that, in order to finance the expedition, the Society had to sell some of its shares in the East India Company and lease out part of its property in Acton (a brick wall, to be specific).

On the recommendation of the Committee of Attraction (you’ll now appreciate this isn’t as racy as it sounds), the Society provided everything, right down to cutlery, as this list of approved provisions shows: 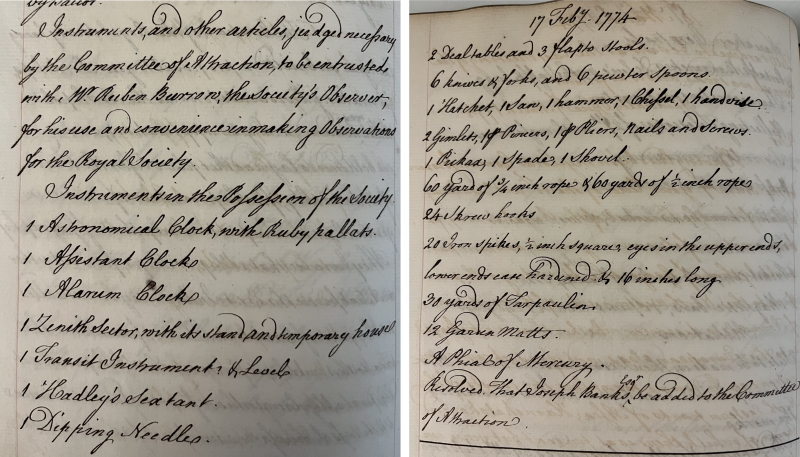 ‘Instruments and other articles judged necessary by the Committee of Attraction … in making observations for the Royal Society’: Council Minutes volume 6, 17 February 1774

A less formal insight into Maskelyne’s stint on the mountain comes via Iona Lane’s lyrics, and also Edwin Danson’s fascinating book Weighing the world: the quest to measure the Earth (2006). The story goes that local notables were invited to mark the end of the experiment at a bothy used by Maskelyne. During the festivities the bothy burnt down, taking with it the prized instrument of fiddler Duncan ‘Redhair’ Robertson, a ghillie who was cook and entertainer to the camp. Apparently Maskelyne later replaced the burnt fiddle with a Stradivarius (!) sent from London, though according to the song it may have been the fiddler who started the fire by playing with incendiary enthusiasm (‘Long into the night a local fiddler’s tune ignites, alone in the sky we toast Schiehallion goodbye’). That’s the beauty of folklore: we aren’t quite sure!

This is perhaps not what the Royal Society had in mind when they induced the Astronomer Royal to undertake the Schiehallion experiment personally to ‘add lustre’, and would no doubt be frowned on by the John Muir Trust, who look after Schiehallion these days. If you’re thinking of purchasing Iona Lane’s Schiehallion, note that proceeds from the track go to support the conservation and maintenance work of the Trust – and it’s a great tune!