Gianamar Giovannetti-Singh, a Royal Society Lisa Jardine Grant recipient, describes how early Fellows of the Society showed a profound interest in China as a source of scientific and technological knowledge.

In 1686, the Philosophical Transactions dedicated an entire issue to research about China, noting that Chinese knowledge appeared to be ‘an Empire of Learning, hitherto only fabulously described’. 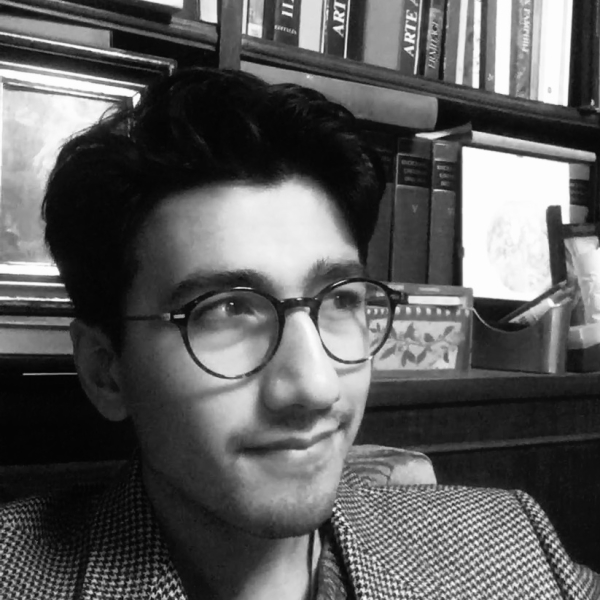 Gianamar Giovannetti-Singh is a PhD candidate in History of Science at the University of Cambridge, a Royal Institution Freer Prize Fellow, and a recipient of the Royal Society’s Lisa Jardine grant in 2022. His research, published in Notes and Records of the Royal Society and several other journals, explores the Jesuits’ globalisation of the sciences in the early modern period.

We often think of the early Royal Society as a distinctly English institution, established with the Restoration of the Stuart monarchy in 1660 and firmly grounded in the political, social, and intellectual context of post-Civil War Britain. However, from the Society’s foundation, its Fellows demonstrated a profound interest in the wider world – and especially China – as a source of scientific and technological knowledge. As my research at the Royal Society Library reveals, seventeenth- and eighteenth-century Fellows paid close attention to the debates raging across Europe about the credibility of different branches of Chinese natural knowledge, from astronomy to medicine and beyond.

As early as 1 April 1663 – even before King Charles II signed the Society’s second Royal Charter – Robert Hooke wrote of his interest in a ‘Chinois Cart with one wheel’, first described in the Jesuit missionary Martino Martini’s Novus Atlas Sinensis. Hooke explained that he had learned that ‘the Chinois in the Province of Pekin have a very usuall & commodious way of travelling from place to place’, which he hoped ‘may perhaps afford some light to a subject that has lately been taken notice of By this Society’:

Early issues of the Philosophical Transactions gave substantial space to discussions about Chinese sciences and technologies. For example, in June 1667 the journal reviewed the German Jesuit Athanasius Kircher’s lavishly decorated China illustrata, which told of the near-miraculous medicinal uses of Chinese naturalia, as well as the technologies of ‘Vernice’ (lacquer), ‘Printing, invented long before that in Europe’, gunpowder, and iron-casting.

Kircher’s seemingly fantastical claims chimed well with the early Royal Society’s promotion of an experimental programme to test fanciful hypotheses. Indeed, as China illustrata’s reviewer noted, the Jesuit’s claim about the prodigious healing powers of a Chinese ‘Serpent that breeds antidotal Stones […] may invite the Curator of the Royal Society, to make the like tryal’. Accompanied by illustrations of Chinese engineering feats, such as the famous Great Wall (below), the Philosophical Transactions’ review of Kircher’s book firmly established China and its sciences as worthy topics of exploration for Fellows of the Royal Society. 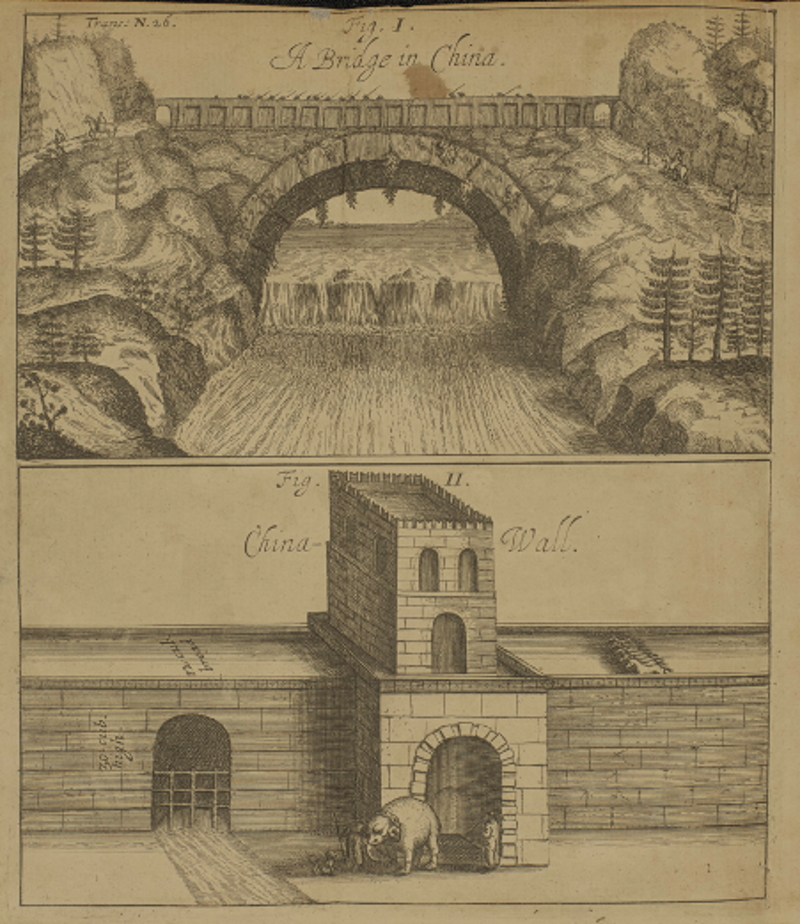 In 1686, the journal dedicated an entire issue to research about China, its nature, sciences, and civilisation, noting that Chinese knowledge appeared to be ‘an Empire of Learning, hitherto only fabulously described’. The issue, which translated letters by French missionaries, as well as an essay on Chinese characters by Hooke, further demonstrated the Royal Society’s desire to explore and understand Chinese sciences, cultures, and technologies: 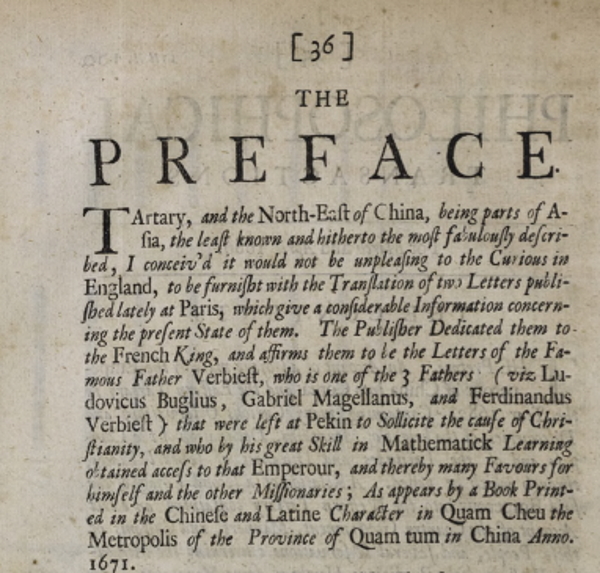 One of the areas of Chinese scholarship that generated the most interest among Fellows of the Royal Society was the empire’s allegedly ancient astronomy, which had the potential to radically unsettle received beliefs about the deep history of humankind. Throughout the early modern period, European antiquarians and philosophers sought to reconstruct the chronology of human civilisation and align the timelines of different populations with that of the Old Testament.

Chinese historical annals, which were backed up by systematically recorded observations of eclipses and planetary conjunctions, appeared to stretch back earlier than the biblical Flood, causing significant problems for Christian chronologers who sought to write universal histories of humankind. To some Europeans, especially in France, these Chinese astronomical records seemed to provide a very strong foundation for writing a new, secular history of the world. To others, particularly Anglican Fellows of the Royal Society, the purportedly ancient Chinese records were false and misleading, and urgently needed to be disproved.

The Royal Society became particularly involved in the controversy over Chinese astronomical chronology after Sir Isaac Newton’s historical account of the origins of civilisation, which radically shortened widely-accepted historical timelines, was published without his consent in Paris in 1725. Many of the scholars involved in the debates surrounding Newton’s chronology, such as the historian Nicolas Fréret and the Jesuit librarian Étienne Souciet, wrote essays and treatises defending the credibility of ancient Chinese astronomy, which completely contradicted Newton’s historical claims. Shortly after Newton’s death in 1727, several Fellows of the Royal Society promoted a chronological table by the former Jesuit missionary Jean-François Fouquet that appeared to discredit ancient Chinese astronomical observations and was compatible with Newton’s truncated chronology: 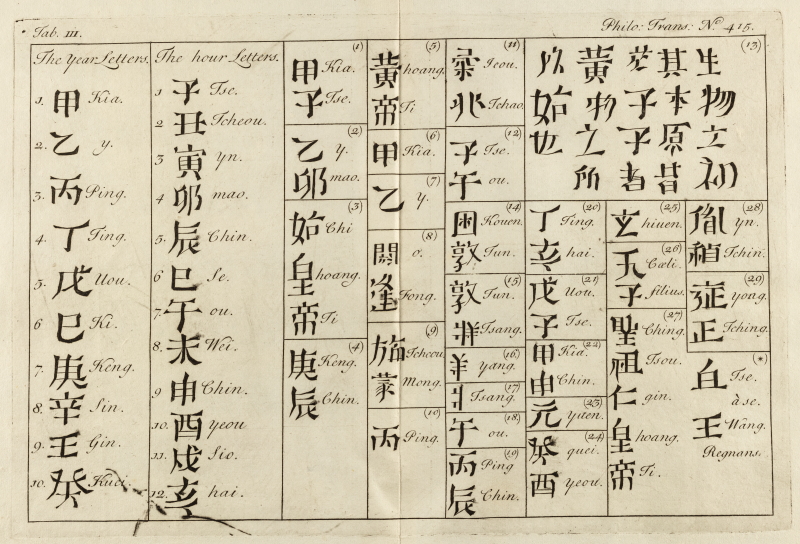 Fouquet wrote two essays explaining his chronology of China in Rome in 1729, both of which rapidly made their way to the Royal Society. One copy was sent by Sir Thomas Dereham from Rome to William Rutty in London, while the other was sent by Fouquet to Eustache Guillemeau in Paris, who forwarded it to Sir Hans Sloane, then President of the Royal Society. Fouquet’s chronology, published in volume 36, issue 415 of the Philosophical Transactions in 1730, claimed that Chinese history ‘is not built on any [ancient] Observation of Eclipses’. Fouquet ‘hoped that henceforward all the arguments of those, who quoted the authority of the Chinese histories against that of the Holy scripture, as if the Chinese had the History of their own Nation many ages, before Moses’s account of the creation of the world itself, will fall to the ground and be no longer regarded’. 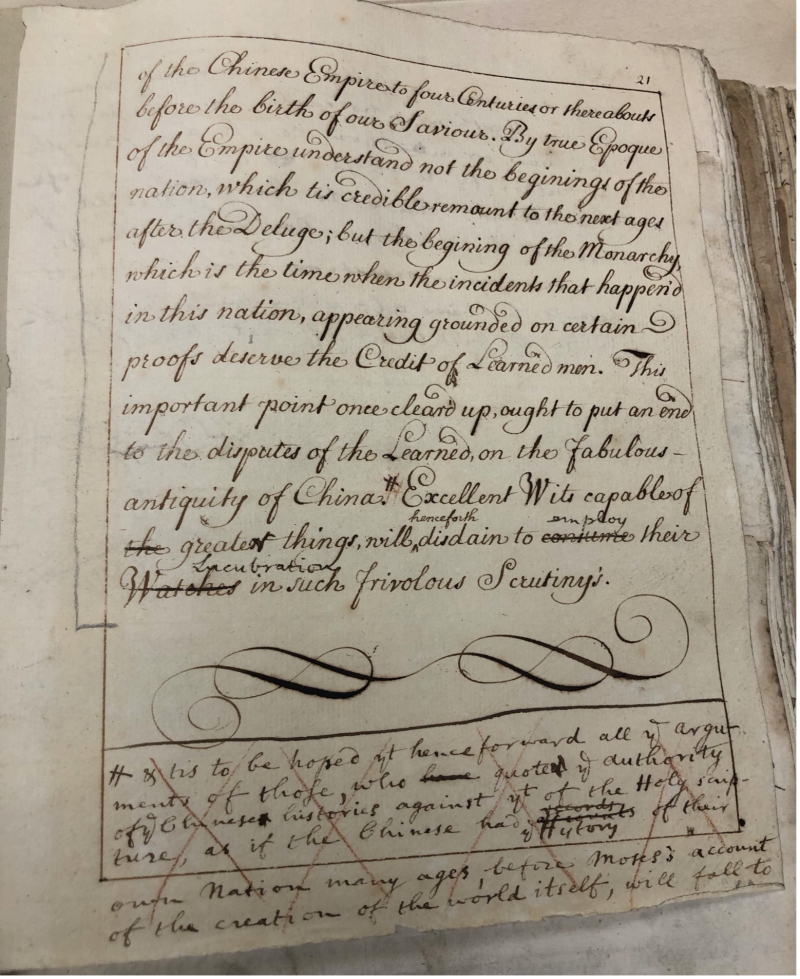 Fouquet’s wish did not come true and, indeed, debates over the credibility of Chinese chronology and ancient astronomy continued to rage across Europe for the rest of the eighteenth century. The rich collection of primary sources detailing the disputes about Chinese antiquity in the Royal Society Library reveals the extraordinary extent to which the early Society’s Fellows were interested in scientific knowledge from China, even if some hoped to discredit it.