Water under the bridge

A survey carried out by John Augustus Lloyd for the Royal Society's Thames Levels Committee greatly improved our understanding of the river, as Jon Bushell discovers.

Lloyd commissioned a new level, which combined ‘superior steadiness and motion in azimuth, more delicacy in the level itself, more permanency in its position, and greater power in the telescope.’

You don’t have to look far in the Royal Society’s archives to stumble across records from one of our myriad committees. Some of these are long-standing bodies such as the Library Committee, which first met in 1678 and still convenes twice a year.

Often the most interesting are those set up for a specific scientific purpose. While fishing around for this week’s blog topic I stumbled across the minutes of the 1830 ‘Thames Levels Committee’. Curious, I decided to dive into the records to find out more.

The committee was established to oversee an important surveying project undertaken by a newly elected Fellow of the Royal Society, the engineer John Augustus Lloyd. Lloyd’s ambition was to join the army, but commissions were hard to come by in 1815, with the end of the Napoleonic Wars. Instead, he acted as a surveyor of mines in Wirksworth, Derbyshire, before embarking to work overseas in the British Virgin Islands. 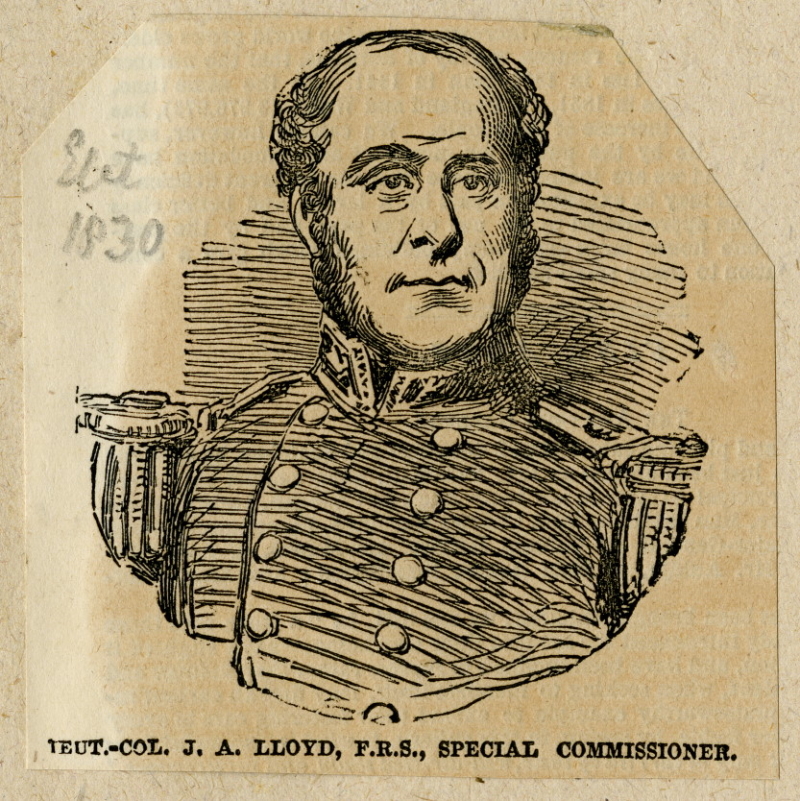 Engraving of John Augustus Lloyd from 1851, in his role as special commissioner for the Great Exhibition

Lloyd became an Engineering Officer in the service of Venezuela’s Simón Bolívar, during the height of the war of liberation with the Spanish. In 1827, Bolívar commissioned Lloyd to survey the Isthmus of Panama and identify a possible route for the proposed Panama Canal. Upon his return to England in 1829, Lloyd presented his results to the Royal Society; these were published in the Philosophical Transactions in 1830. His endeavours also led to his election as a Fellow of the Society that same year.

Lloyd’s arrival back in London proved fortuitous. In 1824, work had begun on the new London Bridge, with the old version due to be demolished once the replacement was completed. Knocking this down was likely to impact the river’s flow, depth, and tidal patterns. Gathering accurate readings of the water level at various points along the Thames was therefore crucial. The Admiralty had approached the Royal Society for assistance with the project, and Lloyd very quickly emerged as the perfect candidate to lead the survey team. 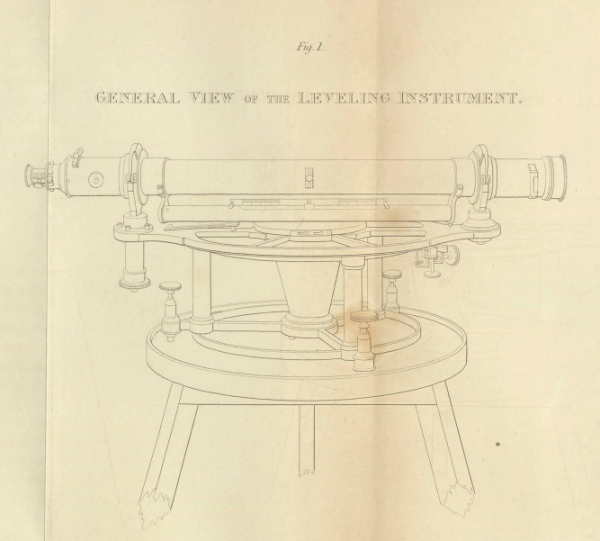 Diagram of the levelling instrument commissioned by Lloyd

Lloyd met with the Thames Levels Committee, chaired by President of the Society Davies Gilbert, in February 1830. Reassured that the Admiralty would provide suitable funding, Lloyd began by procuring the necessary equipment. As his experiences in Panama had shown him, good instruments would be essential. He commissioned a new level from instrument maker John Cary, which combined ‘superior steadiness and motion in azimuth, more delicacy in the level itself, more permanency in its position, and greater power in the telescope.’ As a backup, Lloyd purchased a second level from Troughton & Simms, which survives in the Science Museum’s collection, and borrowed a third from Edward Sabine. 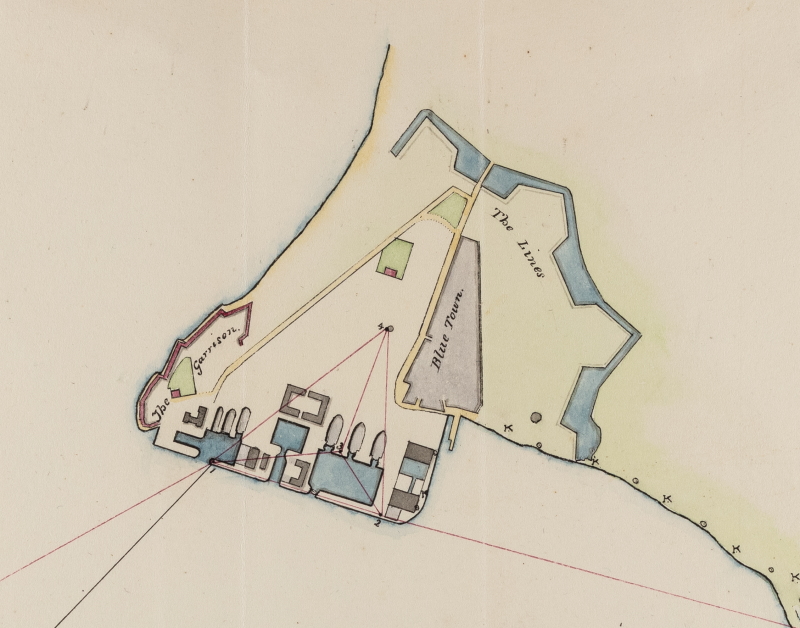 Plan of the docks and garrison at Sheerness, showing the location of Lloyd’s standard marks placed in March 1830 (PT/19/13)

Suitably equipped, Lloyd set off for Sheerness in March 1830. The Navy garrison and dockyard there had been identified as a suitable spot for a tide gauge, which would provide the base sea level readings. The gauge design was unique, incorporating a pair of markers which locked into place automatically at high and low tides. Then began the arduous task of surveying the Thames all the way to London Bridge, a route that was almost 40 miles long and took five months to complete.

The extensive marshlands along the southern banks of the Thames presented a challenge to navigate, let alone survey. Lloyd’s paper states that 263 ditches had to be crossed between Sheerness and Greenwich, with the equipment carefully transported across to avoid damage. Carrying out the necessary measurements was no easier. The boggy ground meant that unnecessary movement by Lloyd or his men could disturb the instruments before a reading could be taken. This cost precious time as the delicate alignment process had to be started over from scratch on each occasion. The long working hours were not without risk in the remote parts of the marshes: in a letter to Captain Henry Kater, Lloyd recounted that one labourer had unfortunately died from the severe cold.

Map showing the route levelled by Lloyd in 1830

Given the challenging nature of the enterprise as well as the expenditure on men and equipment, it’s hardly surprising that ‘levelling the Thames’ proved expensive. The Admiralty provided £100 at the outset but was initially reluctant to commit further funds. Once this was exhausted, Lloyd had to use his own money to continue paying wages and daily expenses. Lloyd appealed to the Royal Society committee for assistance, providing detailed accounts of expenditure to help make his case. Eventually the Admiralty was convinced to increase its contribution to £396, and the committee had to step in to cover the remaining £92 shortfall to ensure Lloyd wasn’t left out of pocket. On top of this was the considerable bill for the instruments, over £183 in total, which the Royal Society eventually agreed to pay as well. 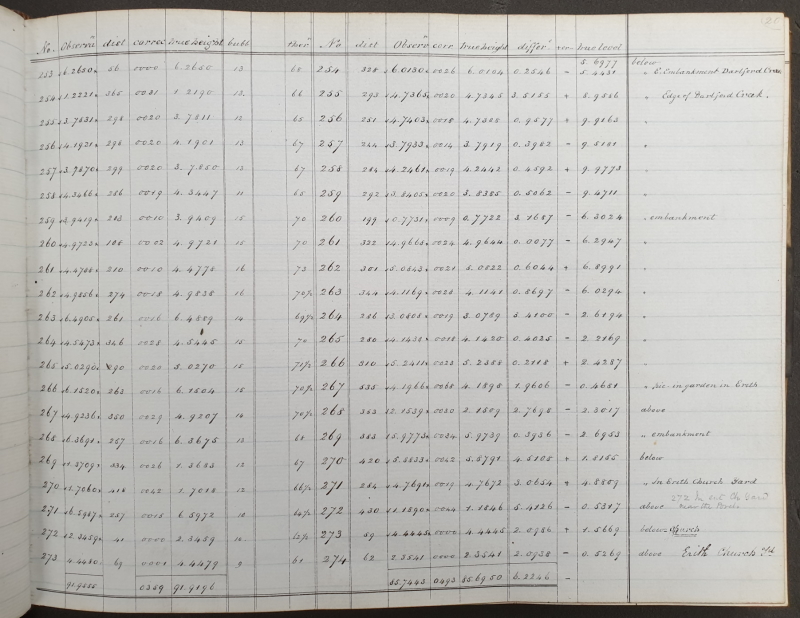 With financial matters finally settled, Lloyd presented his results at a meeting of the Society in March 1831 before sending them off for publication. His original observation book was deposited at the Society and remains in the archive collections today. The survey greatly improved our understanding of the Thames, and Lloyd’s data has enduring value, as historic water level data is a crucial resource for scientists researching the impact of climate change on our rising sea levels.

In 1832 the tide gauge Lloyd installed at Sheerness was upgraded to make it the first ever mareograph, providing a valuable historical record for modern scientists. As for Lloyd, he left for warmer climes, taking the role of surveyor-general for the British administration in Mauritius in August 1831. In the end, I suspect he was just glad that the Royal Society had kept him afloat by plugging the hole in his personal finances before he left.