Image of the mouse midbrain showing a neural circuit for computing escape decisions. Cells have been labelled with a virus that traces synaptic connections between neurons. Magenta neurons integrate threat information and are connected to the blue labelled neurons in the periaqueductal gray, which command the initiation of escape to shelter. 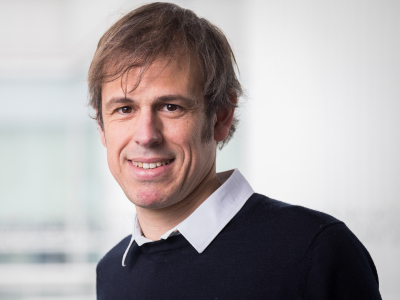 The Francis Crick Medal and Lecture 2023 is awarded to Dr Tiago Branco for making fundamental advances in the molecular, cellular and circuit bases of neuronal computation and for successfully linking these to animal decision behaviour.

The Francis Crick Medal and Lecture is awarded annually in any field in the biological sciences. Preference is given to genetics, molecular biology and neurobiology, the general areas in which Francis Crick worked, and to fundamental theoretical work, which was the hallmark of Crick’s science.

The lectureship was endowed by Sydney Brenner FRS in memory of Francis Crick FRS, the co-discoverer of the structure of the DNA molecule. The first lecture was given in 2003.  The medal is of bronze, is awarded annually and is accompanied by a gift of £2,000.

The Francis Crick medal and lecture is open to UK/Commonwealth/Republic of Ireland citizens or those who have been residents for three or more years. It is restricted to early career scientists with no more than 15 years since (not including career breaks) achieving their PhD and nominations will remain valid and shall be considered by the award selection committee throughout three nomination cycles. Teams or groups may now be nominated for this award.

Professor Serena Nik-Zainal was awarded the Francis Crick Medal and Lecture 2022 and presented her lecture DNA graffiti: Mutation patterns in human cancer and how to use them in medicine

Dr Marta Zlatic was awarded the Francis Crick Medal and Lecture in 2021 and presented her lecture How we learn, predict and decide: the circuit basis of behaviour.

Dr Gregory Jefferis was awarded the Francis Crick Medal in 2019 and presented his lecture Love, smell and memory: exploring the brain circuits for learned and innate behaviour.

See full list of all past winners of the Francis Crick Medal and Lecture.