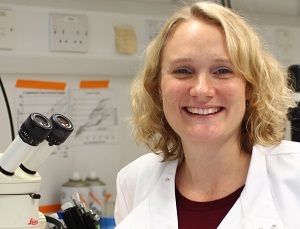 Dr Woolner has hypothesized that “mechanical forces which act on cells, for example stretching forces exerted by other cells or by their environment, can direct the orientation of the mitotic spindle”. These forces act as cues that mitotic spindles “read” to orient their divisions accordingly. The Woolner Group is carrying out a series of experiments to test this idea in the living embryo to “discover the molecular nuts and bolts that allow the mitotic spindle to read the cues that orient it”.

“The Sir Henry Dale Fellowship has given me the level of support I need to undertake the ambitious and time-intensive experiments required for my research.  The flexible working policy of the fellowship has also allowed me to return to work part-time following the birth of my first child – it is important to me that I am able to balance being a mum with being a scientist”.