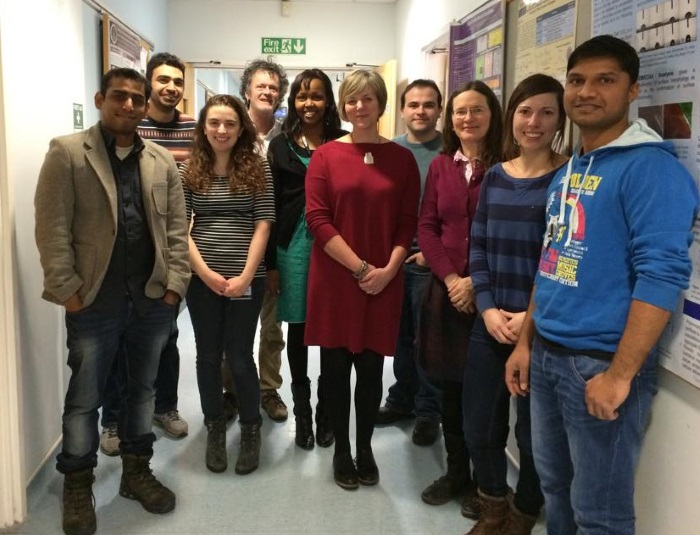 In 2014, Carole Perry, Professor of bioinorganic and materials chemistry at Nottingham Trent University was paired with Lilian Greenwood, Shadow Transport Minister and MP for Nottingham South.

Carole spent two days shadowing Lilian getting, in her words, “a fast-paced introduction to parliamentary life which highlighted a number of opportunities for us as scientists to impact on decision making.” This included attending a debate on fracking, Health Questions in the House of Commons, a meeting for the launch of a new housing benefit deal for young people, the opening of the newly rejuvenated train station in Nottingham and watching Lilian give a speech at a conference on ‘The Future of Rail.’

After this Week in Westminster, Lilian visited Carole in the Chemistry Department at Nottingham Trent University. Carole arranged meetings for her to get an insight into work underway at the University including a panel meeting with around 12 final year chemistry masters’ level students who spoke with Lilian about their time at the university, their career aspirations and what they like about living and studying in Nottingham. Lilian also met with a group of second year students working on individual analytical chemistry projects and with Carole’s research students to learn more about Carole’s research and her work at the university. Lilian told us:

The Royal Society pairing scheme provides a great opportunity to see and better understand how scientists work. I thoroughly enjoyed my time with Carole, her colleagues and students and our discussions have given me a fresh perspective on science policy.

Carole spent a further busy day shadowing Lilian in her constituency in Nottingham. Carole and Lilian visited a local primary school that is supporting the education of children as young as two from the most disadvantaged families in Nottingham and then went to an unveiling of carved wooden story poles celebrating the history of the Meadows, an area of Nottingham. Carole sat in on Lilian’s surgery meeting with constituents, attended a local meeting on housing for people with multiple disabilities and attended the opening of a new centre for immigrants.

Reflecting on her experience of taking part in the pairing scheme, Carole told us:

This was a wonderful opportunity to gain first-hand experience working alongside a member of parliament. Their ability to keep so many ‘balls in the air’ is impressive as is the enthusiasm and skill of the backroom staff who support them! This scheme gives one an opportunity to see the reality of life in the political arena, and is one I would recommend to all.