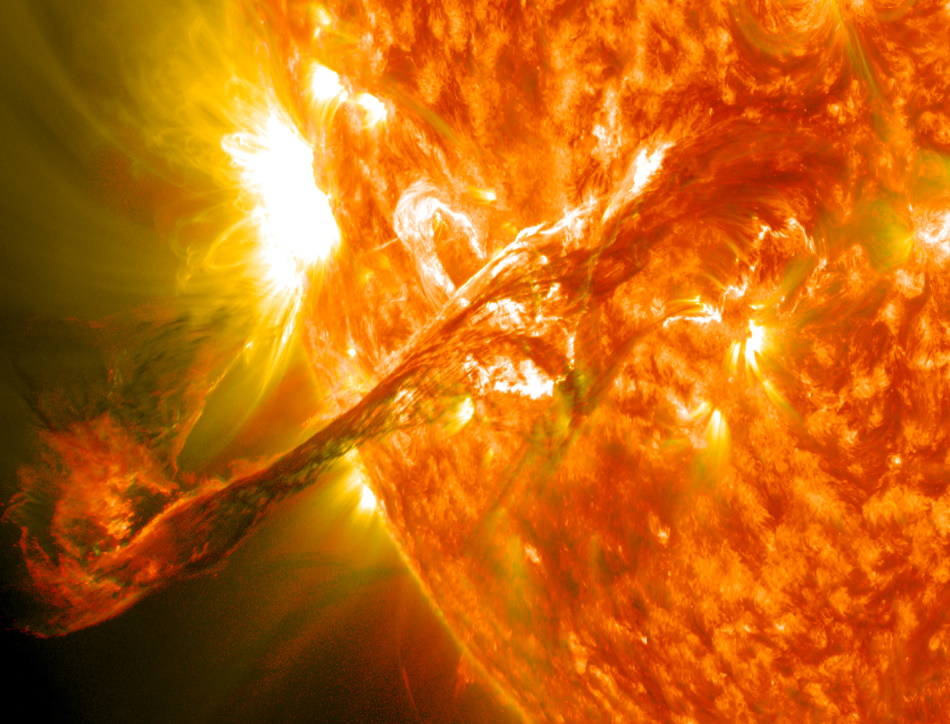 The UK is close to having its first ground-based space weather monitor in a generation, amid warnings of potentially catastrophic solar storms which could knock out power across the planet, and 'fry' electronic communications systems.

Lancaster University scientists, alongside the UK Atomic Energy Authority and UK businesses, have developed a new type of ground level neutron monitor which will be the first such device in the UK for over 30 years.

An announcement is expected later this summer on a site at a Met Office or British Geological Survey (BGS) field station where it will stream data to the UK Met Office Space Weather Operations Centre (MOSWOC) – one of three space weather forecasting centres in the world.

The £1.26m ground level detector project is part of a major drive, funded by the Science and Technology Facilities Council (STFC), to enhance the Met Office’s ability to predict and protect safety critical systems and national infrastructure.

The Lancaster University team behind the new detector are exhibiting at the Royal Society Summer Science Exhibition in London (6-10 July), a free public event where cutting-edge UK research from leading scientists around the country is shared.

The risks posed by space weather are included on the UK National Risk Register of civil emergencies, with the Met Office responsible for reporting space weather risks to government departments and civil aviation.

“Without these ground-level detectors, the UK is really flying blind on the impacts of an extreme space weather event which could damage unprotected digital electronics and cause burnout in high voltage devices” said Dr Michael Aspinall, who led the instrument’s development at Lancaster University.

This nearly happened in 2012 when the largest solar storm in over 150 years tore through Earth’s orbit. A week earlier and it would have hit Earth, disabling power across the globe. Fortunately, the Earth was a week ahead along its orbital trajectory and the storm instead hit a spacecraft.

However, in 1989 a solar storm did strike Earth, knocking out power to six million people living in the province of Quebec in Canada. The geomagnetic storm was caused by a massive plume of superheated plasma and radiation - known as a coronal mass ejection (CME) - from the sun’s surface.

Millions of people suddenly found themselves in dark homes and offices without heating or light. Schools and businesses were closed, the Montreal Metro shut down during rush hour, and the airport was closed. In space, some satellites tumbled out of control for several hours and even the Space Shuttle Discovery was affected.

This was an extreme example of “space weather” which happens on average at least once a year. Typical solar activity 'sunspot' cycles can produce at least two or three large storms, so it is a matter of chance whether one will cause a blackout or not.

Scientists estimate that if the 2012 storm had hit Earth, the effects would have been twice as bad as the Quebec outage, and society would have taken years to recover, with lasting damage to infrastructure and the global economy.

Dr Aspinall said: “With our near total reliance on digital communications, this time the effect would be much worse.  No electricity means no computers, no communication, no navigation. Planes would be grounded, satellites disabled, and mobile phones useless. A prolonged power outage could even lead to a breakdown in the food supply chain with potential civil unrest.

“We can’t stop space weather events happening but if we know when they are coming, we can prepare vulnerable sectors and help ensure that events of this kind are safely managed.”

The Lancaster University-developed neutron monitor has also been redesigned after sixty years, no longer relying on materials that are highly toxic (boron trifluoride) and utilises the best available sensor technology in the most cost-effective way.

If shown to be effective once installed, the new monitors could form part of a new UK network as well as supporting existing global monitoring, and providing a technology that could be exported to boost radiation monitoring across the world.

The Royal Society, the UK’s national academy of sciences, has held exhibitions to showcase cutting edge and exciting science since at least the 18th century, when Fellows of the Society were invited to the President's home to view scientific instruments and specimens from the latest research.

Find out more about this year's exhibits and activities.