The Royal Society Africa Prize recognises research scientists based in Africa who are making an innovative contribution to the biological sciences, including basic medical science, which contributes significantly to capacity building in Africa.

The Royal Society Africa Prize 2018 is awarded to Dr Dorothy Yeboah-Manu for her contributions and innovative approaches to understanding Mycobacterium ulcerans and Mycobacterium africanum, combining microbiology, genetic studies and epidemiology in the areas of her work.

This afternoon seminar, held as part of the Prize, celebrated Dr Yeboah-Manu's work and explored related research. The seminar was chaired by Sir Brian Greenwood CBE FMedSci FRS, London School of Hygiene & Tropical Medicine. The audio recording of the seminar talks and discussion is available on this page. 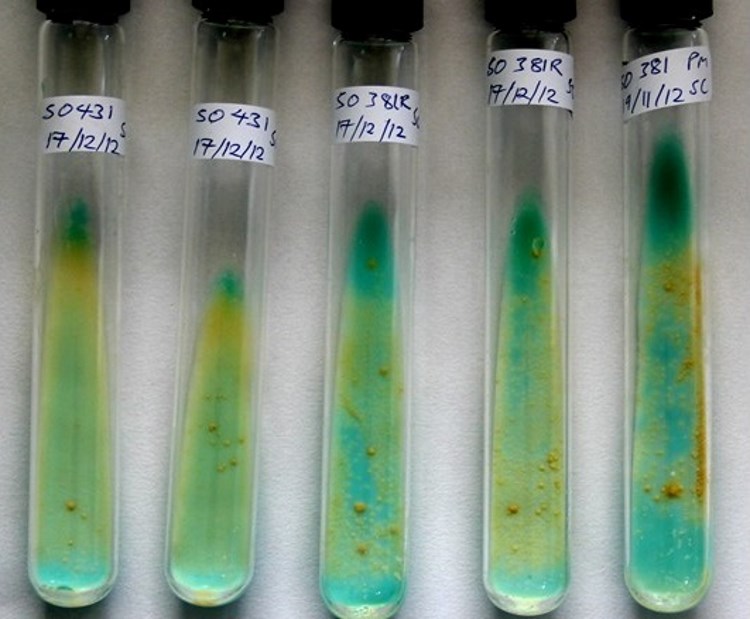 Brian Greenwood qualified in medicine at the University of Cambridge, UK in 1962. Following house-officer appointments in London, he spent 3 years in Western Nigeria as a medical registrar and research fellow at University College Hospital, Ibadan. After receiving training in clinical immunology in the UK, he returned to Nigeria in 1970, this time to help in establishing a new medical school at Ahmadu Bello University, Zaria where he developed his research interests in malaria and meningococcal disease whilst continuing to teach and practice both adult and paediatric medicine.

In 1980, he moved to the UK Medical Research Council Laboratories in The Gambia which he directed for the next 15 years. In The Gambia, he helped to establish a multi-disciplinary research programme which focused on some of the most important infectious diseases prevalent in The Gambia and neighbouring countries such as malaria, pneumonia, measles, meningitis, hepatitis and HIV2. Work undertaken during this period included demonstration of the efficacy of insecticide treated bednets in preventing death from malaria in African children and demonstration of the impact of Haemophilusinfluenzae type b and pneumococcal conjugate vaccines when deployed in sub-Saharan Africa.

In 1996, he was appointed to the staff of the London School of Hygiene and Tropical Medicine where he is now Manson Professor of Clinical Tropical Medicine. From 2001 -2008 he directed the Gates Malaria Partnership which supported a programme of research and capacity development in many countries in Africa directed at improving treatment and prevention of malaria. In 2008, he became director of a new malaria research capacity development initiative, supported by the Wellcome Trust and the Bill and Melinda Gates Foundation, the Malaria Capacity Development Consortium, which supports a post-graduate malaria training programme in five universities in sub-Saharan Africa. He is also director of a new consortium which is studying the epidemiology of meningococcal infection in Africa prior to the introduction of a new conjugate vaccine.

Brian Greenwood has published over 600 papers on a variety of infectious diseases but particularly malaria. He has acted as an advisor to WHO, the Bill and Melinda Gates Foundation, a number of public private partnerships and pharmaceutical companies engaged in the development of drugs or vaccines for use in the developing world.

Buruli ulcer (BU) is a neglected tropical skin disease caused by Mycobacterium ulcerans. BU cases have been reported from more than 30 countries, but the major burden of the disease lies on children in remote rural areas of Central and West Africa. M. ulcerans produces a unique cytotoxic macrolide exotoxin designated mycolactone that is responsible for the chronic necrotising nature of the disease. Since the exact mode of transmission of M. ulcerans is still not entirely understood, early diagnosis and treatment are cornerstones of current BU control strategies.

Since BU patients present with diverse clinical manifestations, differential diagnosis is manifold and clinical misclassification occurs frequently. Therefore we are aiming for the development of antigen capture assays that can be converted into rapid diagnostic tests suitable for point-of-care use. Traditionally surgical excision of M. ulcerans affected tissue was the standard therapy for BU till the World Health Organization published in 2004 provisional guidelines recommending an eight week combination therapy with streptomycin and rifampicin. To develop alternative treatment modalities that are shorter and associated with less severe side effects, we are testing new scaffolds with anti-M. tuberculosis activity against M. ulcerans and are optimising local thermotherapy against the thermosensitive M. ulcerans bacteria. Furthermore, we are evaluating mycolactone as vaccine target and found that mycolactone specific antibodies have toxin neutralising activity.

Professor Gerd Pluschke is Head of the Moleular Immunology Unit of the Swiss Tropical and Public Health Institute (Swiss TPH). He studied biochemistry at the Universities of Tübingen and Munich. After finalising his PhD theses at the Max-Planck-Institute for Biology in Tübingen he has worked at the Max-Planck-Institute for Molecular Genetics, Berlin, the Basel Institute for Immunology, the University Hospital of Freiburg and Ciba Pharma Research, Basel. He joined Swiss TPH in 1995.

Gerd Pluschke is Member of the WHO Technical Advisory Group on Buruli ulcer. His work at the Swiss Tropical and Public Health Institute is focused on the analysis of host-pathogen interactions and the development of new tools for the control of tropical infectious diseases. Research activities include molecular epidemiological studies on the dynamics of bacterial meningitis in sub-Saharan Africa, development of new diagnostic tests and treatment modalities for Buruli ulcer and studies on host cell invasion in malaria and malaria vaccine design.

Tuberculosis (TB) and Buruli ulcer (BU) caused by Mycobacterium ulcerans (Mu) are two of the three main mycobacterial diseases. While TB is globally distributed BU is restricted mainly to West and central Africa. Nevertheless, tuberculosis caused by M africanum (Maf) is restricted to West-Africa and like Mu has been neglected and not much studied. In Dr Dorothy Yeboah-Manu’s lab, the group has undertaken innovative studies to provide evidence for revising some of the long-held notions that have mitigated against the effective control of these diseases. Using a multidisciplinary approach, they have provided evidence towards understanding and improvement of diagnosis, treatment, epidemiology and transmission (four of the six WHO research priority areas) of BU. For example, the group showed that African isolates were genetically distinct, water may not be actively involved in the transmission of Mu and the T cell anergy observed in BU is not permanent but is related to the presence of viable Mu. Dorothy’s work in TB has largely been towards the understanding of the biology of Maf. In two independent studies, the group showed that Maf might have adapted to a specific ethnic group, and also found a reduced transmission of Maf, albeit persistently present in Ghana. Their comparative genomics analysis of Maf and Mtb isolates found these pathogens are genomically distinct with lineage-specific genomic erosions, mutations and conservation of human T cell antigens and epitopes. Dorothy will use funds from this award and other grants to expand the group studies to understand the phenotypic implications of the observed genomic variations.

Dorothy Yeboah-Manu is a Microbiologist and Head of Bacteriology Department, Noguchi Memorial Institute for Medical Research (NMIMR) at the University of Ghana. Dorothy was born at Akim-Tafo in Ghana and attended Ofori-Panin Secondary School for both her O-level and A-level certificates. She continued at the Kwame Nkrumah University of Science and Technology and finished with First Class, BSc (Hons) in Biochemistry. While working as a Research Assistant at the NMIMR, she studied at the London School of Hygiene and Tropical Medicine for her Masters in Applied Molecular Biology of Infectious Diseases (2000). She received a fellowship for her doctoral studies at the Swiss Tropical and Public Health Institute, University of Basel obtaining her PhD in Microbiology in 2006. She was then appointed a Research Fellow, later promoted to Senior Research Fellow in November 2009 and then to Associate Professor in October 2012. She also lectures at the Department of Biochemistry, Cell and Molecular Biology where she is actively involved in the World Bank supported African Centres of Excellence program. Dorothy is a member of the American Society for Microbiology, International Union against Tuberculosis and Lung Disease, the WHO Global Network of Laboratories Confirming Buruli ulcer, executive member of the Federation of African Immunological Societies, and Steering committee member for the National Buruli ulcer Control Program as well as Chairperson of the Advisory Board of the National TB Control Program. Dorothy is also, board member for African Research Academies for Women, Ghana and a Fellow of the Wellcome Trust.

We still have much to learn about mycobacteria, and how the human host responds to mycobacterial infection. We know that macrophages and T cells are critically important in immunity to Mycobacterium tuberculosis, but although T cell activation or production of IFNg can be used to assess the immunogenicity of candidate TB vaccines, they have not given us confirmed correlates of protection. Analysis of host gene expression can provide new insights into the pathogenesis of tuberculosis, the success or failure of chemotherapy, and early diagnosis of disease. Another approach is to evaluate how immunity and host gene expression are modulated by environment, co-infection, and co-morbidity. Many more large-scale studies are required along with better comparative studies of infections caused by mycobacteria other than M. tuberculosis, such as M. ulcerans, M. leprae and M. africanum. Finally we need to integrate studies on the mycobacteria themselves with those of the host immune responses that they induce. Although we do not yet have a new effective vaccine to protect us against tuberculosis, these approaches have the potential to deliver both new insights and field-friendly point of care tests.

Hazel Dockrell obtained her first degree in Microbiology from Trinity College, Dublin, received her PhD from University of London (1978) and after a period as a Research Associate at the Middlesex Hospital Medical School (1978-1985), she joined the London School of Hygiene & Tropical Medicine, initially to work on leprosy, and then on tuberculosis and BCG vaccination. She has contributed to the understanding of the immune responses to tuberculosis and the BCG vaccine, and to the development of TB biomarkers for use in vaccine trials. She has played a major role in the establishment of international collaborative efforts to develop TB vaccines and to identify correlates of protection for TB. A particular interest has been how environment, co-infection, and co-morbidity with diabetes impact on immune signatures induced by BCG and Mycobacterium tuberculosis. She is also Special Advisor on Overseas Programmes in Africa at LSHTM.