Archivist Virginia Mills, who winds the antique clocks in the Royal Society's headquarters, discusses the history of timekeeping and takes a trip to Kew Observatory.

The earliest of my charges is also the most beautiful – dating from around 1700, the Thomas Tompion clock is nearly as old as the Royal Society.

Clocks are on my mind at the moment, for two reasons. Firstly, the clocks go forward in the UK this Sunday, 31 March (‘spring forward and fall back’, for those who always forget whether they are losing or gaining an hour of sleep), and secondly because I’ve been doing my monthly round of clock winding.

As Royal Society Archivist, one of the duties that gets me out of the basement storeroom (where archivists are generally kept) is the winding of three clocks in our home on Carlton House Terrace. Being pretty elderly even for grandfather clocks, each has its quirks: the Shelton regulator in the Library reading room, for example, has a particularly tricky lock that has to be cajoled into giving access to the pendulum and weights without cracking the 250-year-old wooden casing. The lock on the other Shelton clock in the President’s office has given up the ghost, and its hood has to be completely removed in order to access the face, insert the winding key and adjust the hands: 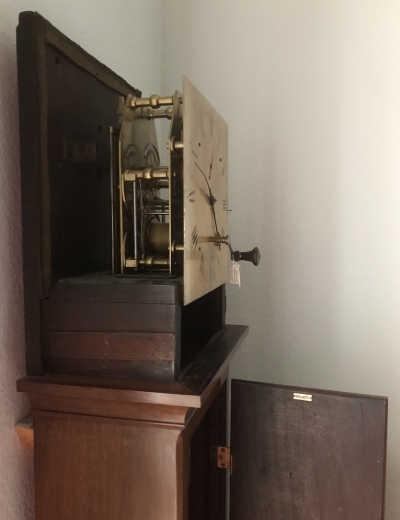 These imposing old timepieces look rather vulnerable with their workings exposed, but their mechanisms represent the cutting edge of eighteenth-century technology. The earliest of my charges is also the most beautiful – dating from around 1700, the Thomas Tompion clock is nearly as old as the Royal Society. Its only difficulty is that the ornate hands can make it tricky to access the ports on the face where the key is inserted for winding: 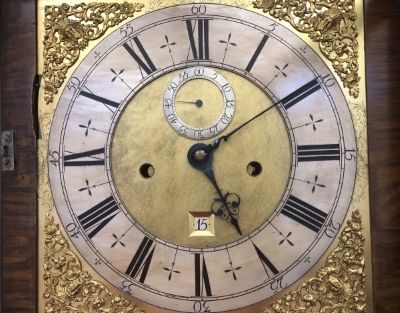 Our Journal Books show that the Society has been concerned with clocks ever since the earliest meetings. This is hardly surprising – accurate measurement of the time of day and intervals of time is key to rigorous scientific investigation, from lab experiments to astronomical observations and accurate marine navigation.

For example, a reliable clock was an essential piece of equipment on HMS Endeavour in Captain Cook’s first voyage, which set out from Plymouth on a mission to observe the 1769 transit of Venus from Tahiti. This rare astronomical event, when Venus passes directly between the Sun and the Earth, would allow astronomers to calculate the size of the Solar System from an accurate measurement of the transit’s duration.

In 1769 the most reliable timepieces were large pendulum long case clocks (or grandfather clocks) such as the series of regulators made by John Shelton for the Royal Society. One of these Shelton regulators was used in Tahiti, and another, pictured below, accompanied Cook on his second and third expeditions and is the one now in our reading room. It is still ticking away 250 years later, though losing about five minutes every month according to my latest readings. 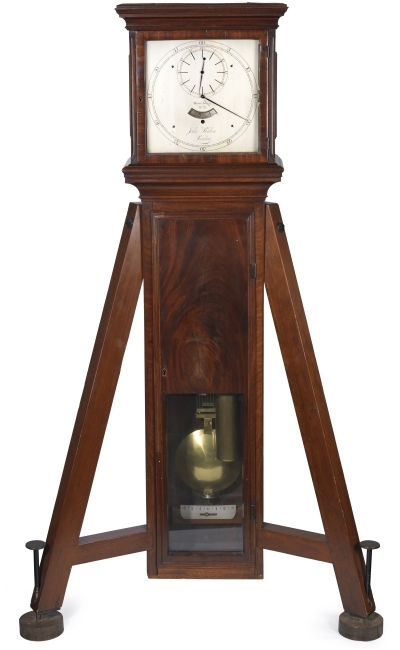 Cook’s Tahiti observatory, christened ‘Fort Venus’, was a temporary affair under canvas with instruments lashed to barrels. Meanwhile, back home and in more comfortable style, the expedition’s patron King George III made preparations to view the transit from a specially constructed observatory in his hunting grounds, the Old Deer Park in Richmond upon Thames. The building, subsequently owned by the BAAS, the Royal Society, the NPL and the Met Office, still stands, now a beautifully restored private residence surrounded by a golf course: 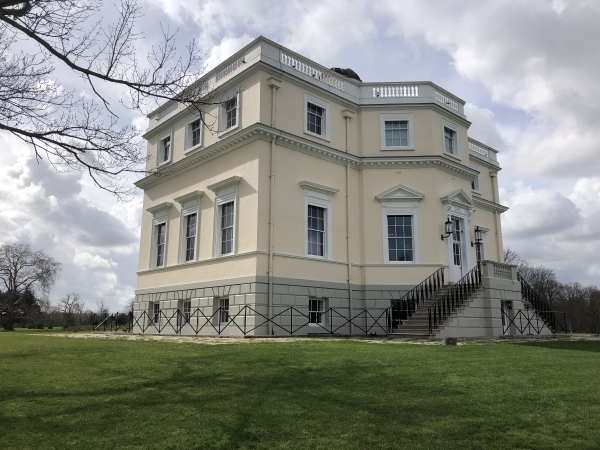 I was lucky enough to book myself on a tour during a temporary public opening earlier this year. The highlight was the cupola or observation dome at the top of the building, a design concept initiated by Swedish astronomer Anders Celsius – yes, the man who gave his name to the temperature scale. While the mechanisms which open and turn the viewing window still function, the telescope is a replica, but in any case the day of my visit was rather overcast, in contrast to the clear conditions enjoyed by George III when he observed the transit 250 years ago this June. 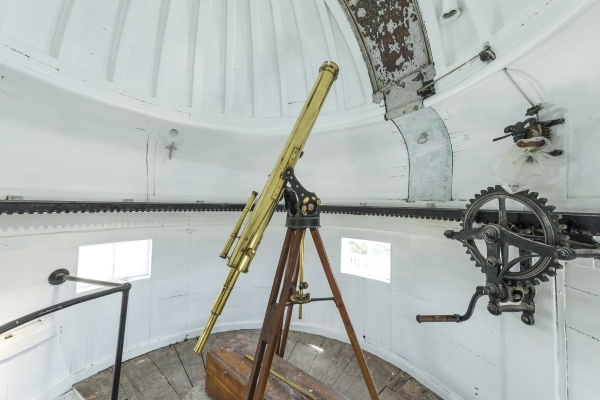 The cupola at Kew Observatory. Picture used by kind permission of Robbie Brothers.

Before the Prime Meridian was established at Greenwich in 1884, it was from the King’s Observatory that accurate time readings were communicated to offices of state around the country, using the George III collection of pendulum clocks and a meridian established between two obelisks. The accuracy of the timepieces was such that, from 1850, horologists and other scientific instrument makers sent their creations to what was now known as the Kew Observatory for a certificate of excellence. This seal of approval was recorded with the letters ‘OK’ for ‘Observatory Kew’ – one possible origin for the modern term? 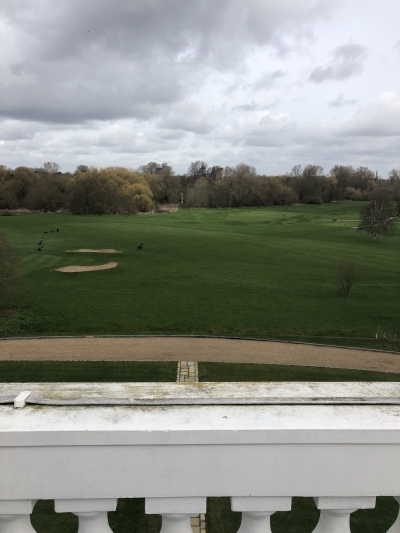 View over the golf course from the Kew Observatory

Whilst the learned and wealthy had access to reasonably accurate time measurement after the invention of the pendulum clock by Christiaan Huygens FRS in 1656, owning any kind of timepiece was well beyond the financial reach of most people until well into the nineteenth century. There were public clocks, mostly on churches, and the time during the day could be estimated by observing the sun. But what about at night? And without a mechanical clock, how would the increasing number of industrial shift workers ensure that they didn’t oversleep and turn up late for work?

Royal Society minutes from 12 December 1745 record one solution used by weavers in Norwich. Described as ‘a larum’ (meaning ‘to alert’ and the root for our word alarm), this was a candle clock, based on calculating the time a candle takes to burn to various marked points. The Norwich weavers converted this idea to an alarm clock by placing a string strategically alongside the candle so it would be burnt at the time they required a wake-up call. The method of waking would depend on how the string had been rigged:

‘as soon as the Candle burns down to the place, it burns the Packthread, which breaking lets fall the weight upon the sounding Board, and gives the Larum to the person who is to be waked by it; or by means of another Packthread twisted round the Thumb, and communicating with that which holds the weight, as soon as the Line breaks, the fall of the Weight gives a Pull, and wakes the Person.’

An ingenious innovation, and – crucially – cheap and simple, if not the most pleasant way to be woken up. We in the UK may all be losing an hour of sleep when the clocks go forward come 31 March, but at least we can be grateful that we’re not going to be woken by a dead weight yanking on a thumb. It’s almost enough to make me appreciate my alarm clock.