Cataloguer Fiona Callaghan finds hidden gems in the Referees’ Reports, a cornerstone of the Royal Society’s publishing process since 1831.

The collection contains some real treasures: pop culture references, links to historical events, a report featuring the paw print of a furry friend, and the tale of a Referee’s Report lost to fire.

Peer review has been an essential step in the process of academic publishing for centuries. As a cataloguer for the Royal Society’s ‘Science in the Making’ project, I’ve spent the past few months deciphering and cataloguing the Society’s vast collection of Referees’ Reports. These reports will be digitised and available online via the ‘Science in the Making’ platform in the near future.

Peer review has been a cornerstone of the Royal Society’s publishing process since 1831, when a statute was passed decreeing that Fellows could be called upon to report on papers and assist the Committee of Papers in their decisions about publication. In the early days, Referees’ Reports were written in the form of letters, sent to the Society’s Secretary. However, at the turn of the twentieth century, standardised forms were created on which the referees could easily answer set questions about the paper.

The Referees’ Reports collection offers a key insight into the publishing practises of the Royal Society. Some of the most eminent scientists of the nineteenth and twentieth centuries have both undertaken the role of referee and submitted their papers to the mercy of their peers at the Royal Society. The collection contains some real treasures, some of which were unexpected: extremely critical (and by extension, humorous) reports, pop culture references, links to historical events, a report featuring the paw print of a furry friend, and the tale of a Referee’s Report lost to fire.

Speaking of eminent scientists, the collection holds reports by the likes of Michael Faraday, William Thomson, James Clerk Maxwell, Ernest Rutherford and Arthur Cayley, to name but a few. One of our most famous Fellows, Charles Darwin, performed referee duties on seven occasions! Here’s one example: 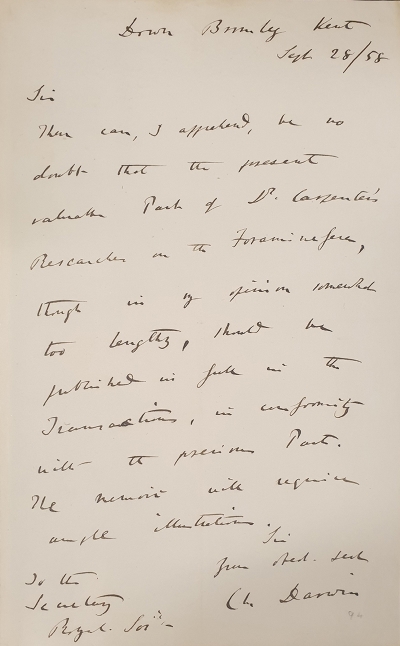 Darwin’s report on a paper by William Benjamin Carpenter – he recommends the paper for publication in the Philosophical Transactions, although it is ‘somewhat too lengthy’ (RR/3/41).

Some of the most interesting reports I’ve catalogued are of a critical nature, featuring withering observations and a few character assassinations thrown in for good measure. A Referee’s Report by James Jeans describes the experimental outcome of the author, T.J.J. See, as ‘more like the ravings of a lunatic than an attempt at serious reasoning’. The style and structure of the paper is like ‘those of a schoolboy’s essay – a confused outpouring of all the facts of physics that the author knows’. The paper only serves to gratify the author’s ‘vanity and egoism’. Needless to say, the record shows that this paper was unpublished.

Another particularly scathing report comes courtesy of Shelford Bidwell, who avoids communicating with the author in question, as he seems to be a bit of a ‘crank’ who has written a paper which is ‘rubbish’ and ‘of so rank a character that no competent person could possibly take any other view of it’. Unsurprisingly, this paper was also deemed unsuitable for publication. 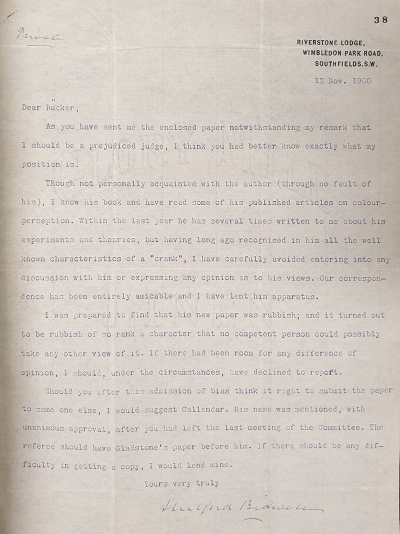 Occasionally, we get an insight into the author’s reaction to a critical Referee’s Report. This was the case with Hugh Callendar’s report on Randal Berkeley and C.V. Burton’s paper on osmotic theories of solution. He believes the authors to be ‘so cocksure’ that he ‘doesn’t feel inclined to present them with the right result’ and doesn’t recommend the paper for publication. He urges the recipient of the report not to share it with the authors, as it would result in Burton being his ‘deadly enemy for life’. In response, Berkeley is truly outraged, claiming that the referee ‘cannot have read the paper’ and refuting the claim that it is too complex. Despite producing a second amended version of the paper, it was never published.

The Referees’ Reports can also give an insight into the world in which the referees lived and worked. This is reflected in John Ambrose Fleming’s 1915 letter to the then-Assistant Secretary of the Royal Society, Robert Harrison. Fleming excuses himself from reporting on a paper, citing the following reason: ‘the policy adopted by the Royal Society of forming secret committees on war matters from which the majority of Fellows are excluded and the refusal to call the general body together for a discussion on the matter is one which I so deeply disagree with that I do not wish to undertake any referee work whilst this regime of secrecy and exclusiveness prevails’. Fleming’s refusal to report on a paper (one of a few items in the collection to mention the Great War) is his form of protest against the so-called ‘secret war committees’ within the Royal Society.

A few references to popular culture of the time can also be found in the reports. Charles Galton Darwin criticises an author’s use of the word ‘intriguingly’ in a paper, claiming that ‘the only authority I can find for his use of the word is the classic “Gentlemen Prefer Blondes”’. It is unknown if he is referring to the book of 1925 or the silent film of 1928 (the report is from 1930 so pre-dates the famous Marilyn Monroe version!). In 1926, William Bateson responded to a paper on the mathematical theory of evolution by claiming ‘Van Gogh’s Postman is to appear in the National Gallery, so I suppose we must expect Post-Impressionist science in the Phil. Trans’.

Occasionally, the reports give you an insight into a referee’s personal life. This is the case with one of Arthur Stanley Eddington’s reports, where his dog [cat? Ed.] has gone for walkies across the page! This is evident thanks to the muddy paw prints that the intrepid creature left behind. 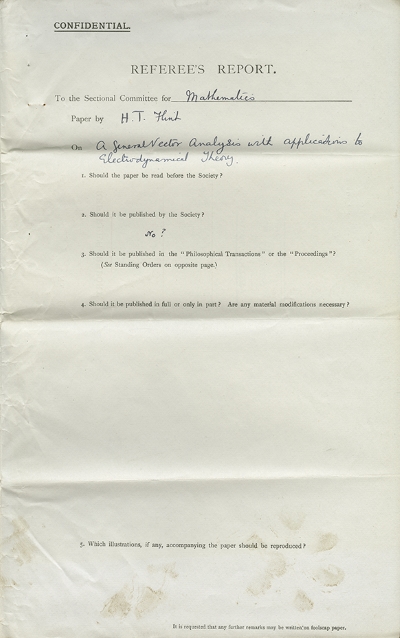 Finally, even the brightest minds can be stalled by silly accidents. Nobel Prize winner J.J. Thomson had to write a letter to the Secretary of the Royal Society at the time (John William Strutt) to inform him that William Thomson’s report on his paper had been accidentally destroyed. This was caused when J.J. Thomson left the paper on his desk and, while he was in another room, ‘a shade fell from a candle and caught fire’. He was unable to decipher any of the original text. Was this a genuine accident or a case of ‘the dog ate my homework’? I’ll leave that for you to decide…

Our collection of Referees’ Reports is available for reference at the Royal Society Library, and will soon be digitised and added to the ‘Science in the Making’ platform.