Ellen Embleton traces the comings and goings of a clock made by Thomas Tompion for John Flamsteed, the first Astronomer Royal.

Clearly it was an incredibly significant artefact. As indicated by the inscription, it was one of the two clocks that Sir Jonas Moore commissioned directly after the founding of the Royal Observatory at Greenwich in 1675.

As I made my way through volume 62 of our New Letter Book series, which contains outgoing correspondence from 1922, the presence of one of our early Fellows loomed large.

Within the space of ten days, three letters sent from Royal Society Secretary James Jeans made reference in one way or another to John Flamsteed, Astronomer Royal from 1675 to 1719. These letters were curious in themselves and, when combined with the coincidence of their appearing in such quick succession, seemed to demand further investigation.

The first was a letter from Jeans to Herbert Hall Turner, sent on 31 January 1922. Jeans appears to be replying to an enquiry from Turner about the whereabouts of a certain Thomas Tompion clock. His reply is dismissive, stating ‘I don’t think the clock is here or ever has been’. On tracking down Turner’s original incoming letter, my interest was heightened by his reference to the clock as ‘the lost masterpiece’. 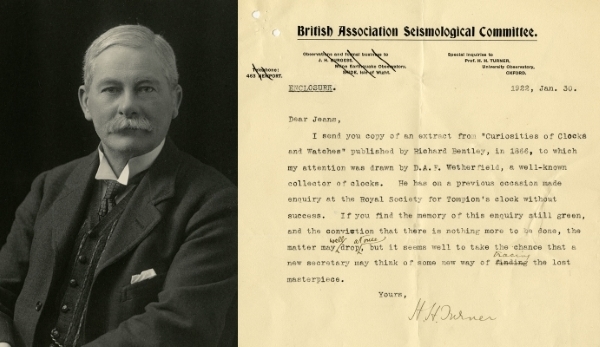 On 9 February, another letter appears from Jeans to Turner. Thanks to the detective work of the Society’s Assistant Secretary at the time, Francis Towle, some new information is presented regarding the clock. This letter relays an entry from a 1736 Journal Book:

‘Mr. Hodgson made a present of the late Mr. Flamsteed’s Clock which in his time stood in the Great Room of the Royal Observatory at Greenwich. It goes thirteen months without winding up and was the donation of Sir Jonas Moore whose name is inscribed on the dial plate with its motto: Sir Jonas Moore caused this movement with great care to be thus made anno 1676 Thomas Tompion.’

I checked this against one of our eighteenth century Library Catalogues, which contained an entry confirming the clock’s residence in the Society as of December 1736:

Jeans’s letter goes on to explain that, according to Towle’s findings, the clock was in the possession of the Society from 1736 to 1835, when a request was made that it be returned to the Royal Observatory. That the clock was returned to its home in 1835 explains Jeans’s initial confusion on the subject: it was simply not an object that he had ever known. However, clearly it was an incredibly significant artefact. As indicated by the inscription, it was one of the two clocks that Sir Jonas Moore commissioned directly after the founding of the Royal Observatory at Greenwich in 1675. These clocks were intended to enable Flamsteed to fulfil his role as Astronomer Royal, accurately recording the motions of the planets and the Moon, and helping establish the positions of stars. That it once resided in the Royal Society is a very special thing.

While this story was unfolding, Jeans was busy seeing to another Flamsteed-related matter. On 2 February a letter appears in volume 62 from Jeans to Dr John Louis Emil Dreyer, astronomer and historian of astronomy, informing him that they have found a bundle of 70 autographed letters from John Flamsteed ‘in a cupboard’, and asking if he could take a look at them. Dreyer’s reply encourages Jeans to preserve these letters, which – thankfully! – he does. We now know them as MS/243, a volume of Flamsteed’s correspondence from 1672 to 1687 – no longer stored in a cupboard, I hasten to add, but catalogued and shelved appropriately in our temperature-controlled archive storeroom.

MS/243 contains letters sent from Flamsteed to Richard Towneley (1620-1707), a mathematician, astronomer, and coincidentally the inventor of the deadbeat escapement that Tompion later made and modified in the two astronomical clocks in question. Pleased by this link between my Flamsteed enquiries from 1922, I perused the volume further and happened upon a letter discussing these very clocks, accompanied by Flamsteed’s own illustration of their escapement: 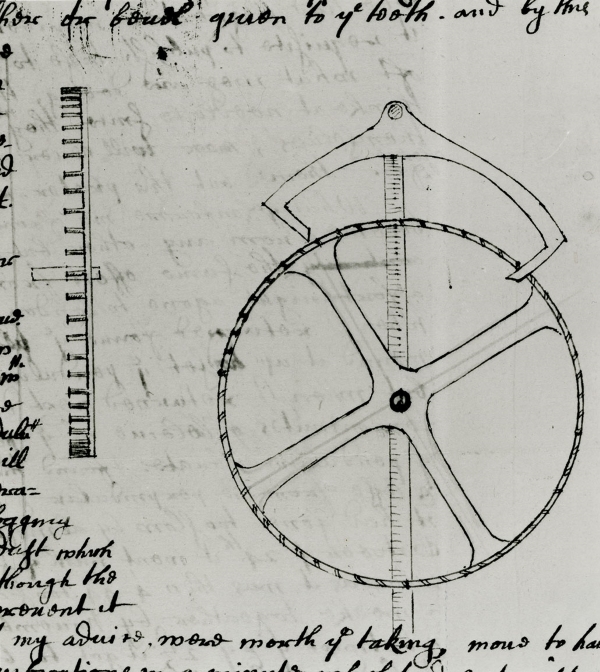 This is not the first time that the New Letter Books have revealed information on the provenance of items within the Society’s object and manuscript collection. They have a unique ability to do so, and my recent encounter with Flamsteed has been a welcome reminder of this fact.