Of value to the enemy

Fiona Callaghan looks at the effects of World War II on the publication of scientific papers, in a tale featuring Royal Society Referees' Reports and the 'disappearance' of mathematician Frederick Gerard Friedlander.

As it turned out, both of the referees decided that the papers should not be published as they may ‘stimulate interest in the problem in undesirable quarters’.

As I mentioned in my previous blog post, the Royal Society’s collection of Referees’ Reports is a treasure trove of insights into the Society’s administrative history.

Having catalogued items from as far back as 1832, I now find myself in the depths of the Second World War, with reports dating from 1939 to 1945. At this time, the Royal Society had a policy stipulating that papers which could be considered ‘of value to the enemy’ were not to be published. Instead, some – particularly those of a chemical or physical nature – were sent in confidence to government departments, with publication being deferred until after the war. 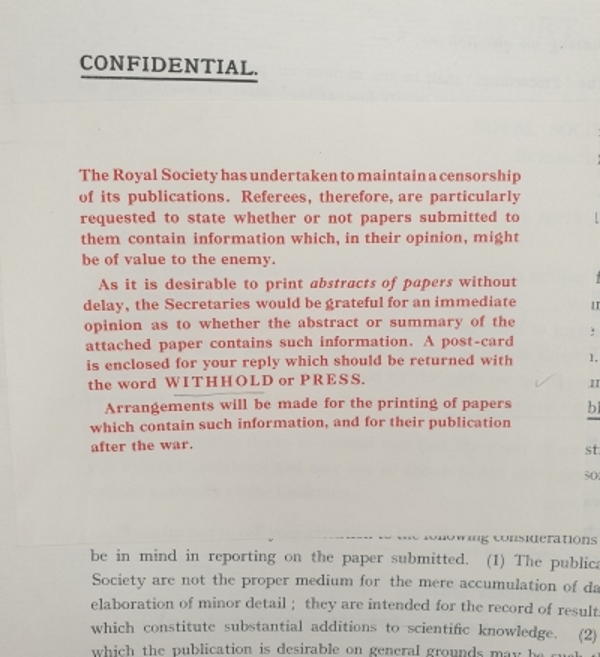 One particularly interesting case that I came across was the communication of two papers by Frederick Gerard Friedlander on the diffraction of sound pulses: ‘I. Diffraction by a semi-infinite plane’ and ‘II. Diffraction by an infinite wedge’. They contained the results of some calculations which showed the changes undergone by a sound pulse when diffracted by an infinite screen or wall with a straight edge. In turn, the paper could demonstrate the shielding effects of walls from bomb blasts – surely a matter that would be ‘of value to the enemy’?

Well, the communicator of the research didn’t seem to think so. The two papers in question were submitted to the Royal Society in 1940 by Geoffrey Ingram Taylor, Friedlander’s supervisor (RR/67/157). Taylor believed there would be no objection to publication, and predicted that ‘civil defence people’ would be most interested in the papers. However, he supposed that the Society would ask some of the government departments concerned.

As it turned out, both of the referees, Charles Herbert Lees and Edward Neville da Costa Andrade, decided that the papers should not be published as, according to the latter, they may ‘stimulate interest in the problem in undesirable quarters’. (RR/67/166 and RR/67/162). Thus the decision was made by the Royal Society to defer publication until after the war, and the papers were made confidential. Government departments were sent a summary and asked if they would like a copy, and several were requested by the Ministries of Supply and Home Security. It is at this point that the author is expected to edit the papers based on referee’s comments and resubmit them. However, Friedlander was nowhere to be found! 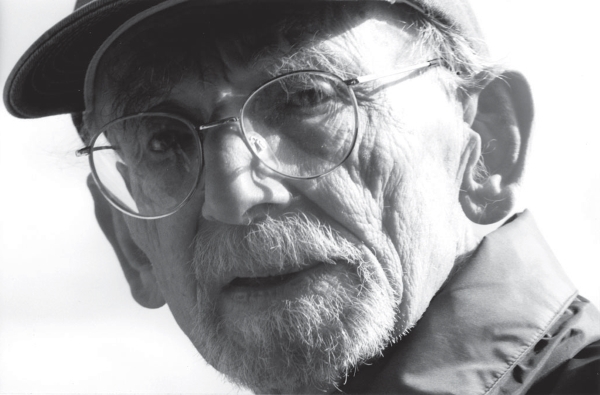 At this point it would be helpful to learn about the man himself, and his eventful early life. Friedlander was born in Vienna to prominent communist parents (his mother was the co-founder of the Austrian Communist Party). He moved to Berlin, then Paris, and was later sent to the United Kingdom (alone and at the age of 16) by his mother. He gained a scholarship and obtained a first-class degree in Mechanical Sciences at Trinity College Cambridge in 1939. Prior to receiving his degree, Friedlander worked alongside Taylor as a research student. Upon graduating, Taylor recognised that Friedlander wasn’t cut out for laboratory work and instead asked him to calculate reflections and diffractions by various obstacles, turning his career towards applied mathematics.

Despite being from Vienna, Friedlander had legally been a German citizen since the Austrian Anschluss. This made him an ‘enemy alien’ in Britain and in 1939 he had to appear before a Home Office panel, where his claim that he was a genuine refugee from the Nazi regime was accepted. He was allowed to continue with his studies and during this time submitted his work to Trinity as a fellowship dissertation. However, in April 1940 Nazi successes in France, Holland and Belgium led to the decision to intern all male Germans residing in Britain.

We first learn of Friedlander’s internment in a letter from Taylor to the Society in May 1940 (RR/67/168). He stated that the author was ‘interned shortly after getting back his m/s. He does not seem to have had time to revise [the papers]’.

Friedlander, by then in an internment camp in the Isle of Man alongside other Austrian-born ‘alien’ scientists such as Hermann Bondi and Max Perutz, was no longer available to make the minor modifications suggested by the referees. In September 1940, Taylor wrote to the Society (RR/67/174) to inform them that he could not communicate with Friedlander. The author’s ‘fiancée believes he is in Ottawa but it is certain that he is not allowed to communicate with his friends, since we have had no letters’. His fiancée wasn’t far wrong – it transpired that Friedlander had been sent to a camp in Montreal. Here began the campaign to have him released. 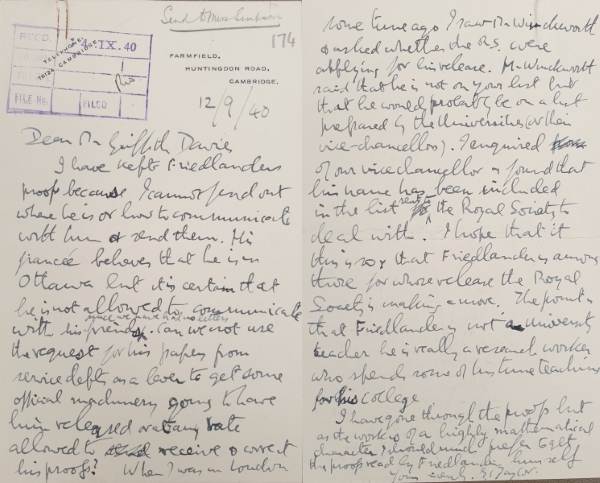 Two days before departing for Canada, Friedlander submitted his Fellowship dissertation to Trinity. While interned, he received a telegram of congratulations from Taylor as he had been elected. This achievement helped to move along the release process, with Archibald Vivian Hill writing to The Times to comment on the absurdity of a Trinity Fellow being interned as an ‘enemy alien’. He was eventually released in January 1941.

And what happened to the papers? Well, they were eventually published in 1946 and can be read here and here. As for Friedlander, I was happy to discover that he went on to a long and illustrious career in mathematics and was elected to the Fellowship of the Royal Society in 1980. You can read more about him in the Biographical Memoirs of Fellows of the Royal Society.

There are many more examples of papers being considered ‘of value to the enemy’ within the Referee’s Reports collection. This is available for reference at the Royal Society Library, and will soon be digitised and added to the ‘Science in the Making’ platform.