Historian of photography Rose Teanby marks the 50th anniversary of the Apollo 11 lunar landing by looking back at some pioneering images of the Moon from the Victorian era.

The announcement of the invention of photography in 1839 triggered a space race of its own. In March 1840 Dr John William Draper announced that he had succeeded in getting ‘a representation of the Moon’s surface by the Daguerreotype.’ 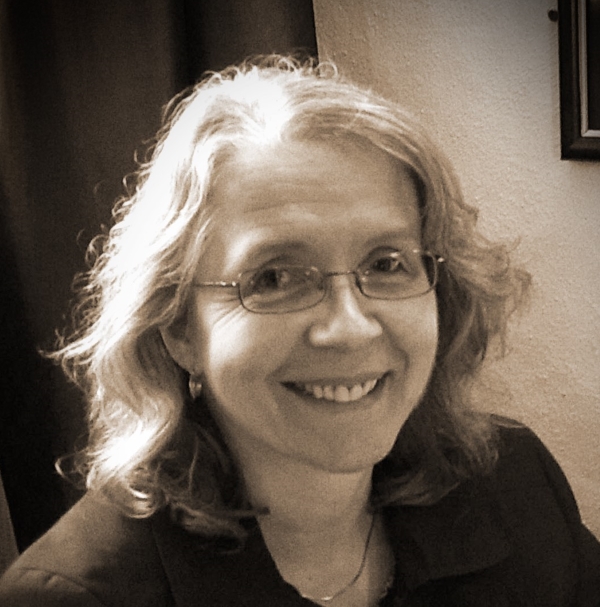 Rose Teanby is a PhD candidate at the Photographic History Research Centre, De Montfort University, researching early women photographers 1839-1861 She is also an Associate of the Royal Photographic Society.

Fifty years ago, people of the world held their collective breath as Apollo 11 landed humans on the Moon for the first time. Before 20 July 1969 there were several early attempts to travel through space using accurate illustration, resulting in ground breaking astronomical photography, deceptive imitation and an infamous hoax.

Enduring fascination with the Moon pre-dates a Newtonian telescope’s ability to bring the lunar surface within the grasp of the astronomical artist. Illustrations by Robert Hooke FRS (1635-1703), in his book Micrographia, provide a 1665 interpretation of lunar geology. Hooke constructed clay models based on his own lunar observations, then simulated distinctive craters, later attributing their creation to volcanic activity. 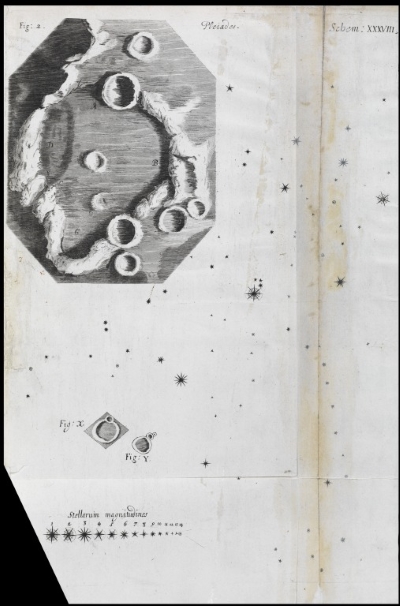 ‘Observation LIX: Of multitudes of small Stars discoverable by the Telescope’, and ‘Observation LX: Of the Moon’: Schem. XXXVIII from Robert Hooke’s Micrographia (1665). © The Royal Society (RS.9453)

Sir John Herschel FRS (1792-1871), son of astronomer William Herschel FRS (1738-1822), continued exploration of the heavens, becoming a founding member of the Astronomical Society of London in 1820. Within his voluminous correspondence held at the Royal Society, there is an exchange of celestial minds in 1858, illuminating an age of Victorian lunar exploration. Warren de la Rue FRS (1815-1889) shared Herschel’s twin passions of astronomy and photography and their letters contain details of a breakthrough in virtual space travel, 111 years before the Eagle landed in 1969.

Herschel’s encounters with the Moon had not always been positive. In 1835 he became the innocent victim of what became known as the Great Moon Hoax, published by New York newspaper The Sun. A series of articles, written without Herschel’s knowledge, linked him with the discovery of life on the Moon, initially amusing but later irritating him.

The announcement of the invention of photography in 1839 triggered a space race of its own. In March 1840 Dr John William Draper of New York University announced that he had succeeded in getting ‘a representation of the Moon’s surface by the Daguerreotype.’ 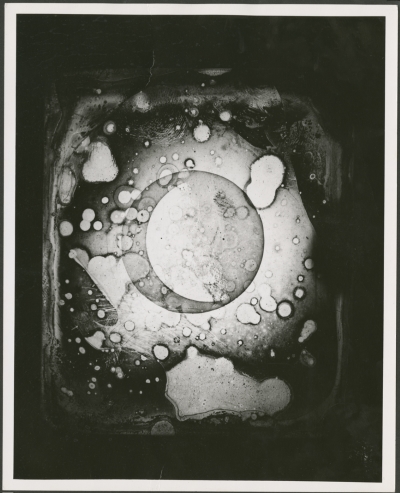 John Adams Whipple captured a full Moon in 1849. He used daguerreotype photography through the telescope at the Harvard College Observatory in Cambridge MA, in collaboration with William Cranch Bond and George Phillips Bond. A daguerreotype of the Moon by Whipple was subsequently exhibited at the Great Exhibition in 1851 to critical acclaim. 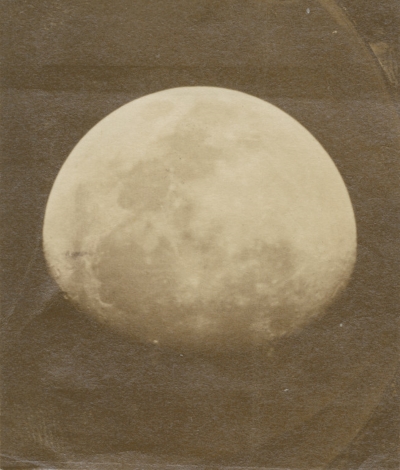 James Nasmyth (1808-1890) produced captivating lunar images in sublime detail. But Nasmyth’s photographs were an illusion, faithful reproductions of intricate plaster models formed using his own astronomical observations. Nasmyth continued Hooke’s 1665 experiments, observing through a telescope, drawing in detail then moulding in plaster to form a three dimensional representation of the lunar surface. 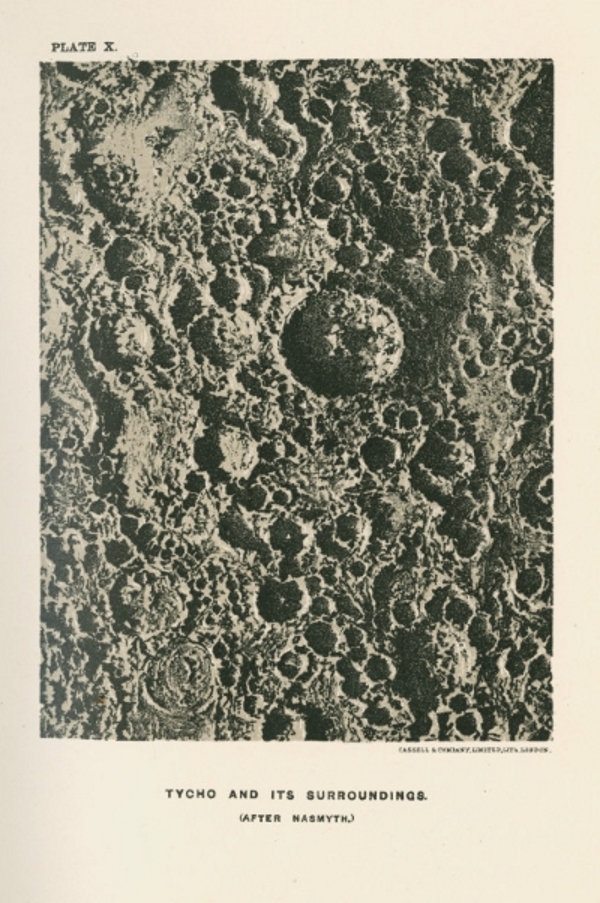 ‘Tycho and its surroundings after Nasmyth’. Illustration from The story of the heavens by Robert Stawell Ball (1913). © The Royal Society (RS.9179)

Lunar imaging was not an exclusively male preserve. A contemporary of Robert Hooke, German astronomer and artist Maria Clara Eimmart (1676-1707), created illustrations of celestial phenomena including the Moon in support of her father’s astronomical observations. Early photographer Thereza Dillwyn Llewelyn (1834-1926) echoed Maria’s interest in astronomical illustration, joining her father John Dillwyn Llewelyn FRS (1810-1882) in celestial photographic exploration. From their observatory in South Wales within the grounds of the family home at Penllergare, father and daughter photographed the Moon successfully in 1858. 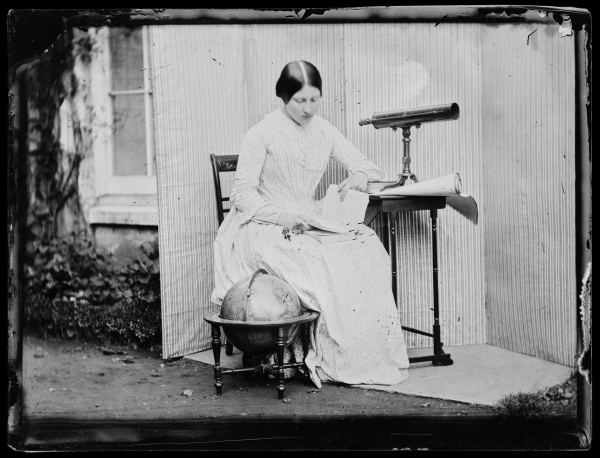 Astrophotography presented a significant challenge to capture a moving object in low light. Warren de la Rue dedicated many nights to the pursuit of the Moon using a clockwork driven equatorial reflecting telescope. He engaged the services of Robert Howlett (1831-1858), a professional photographer who owned both Gregorian and Newtonian telescopes. Howlett’s practical knowledge of increased sensitivity in photochemistry enabled De la Rue to capture an image of the Moon in only ten seconds by 1857.

Not content with single images of the lunar surface, De la Rue harnessed stereoscopic photography to create a representation of the Moon in three dimensions. This necessitated two photographs taken at the same lunar phase but at different libration, to create a slight visual difference between the two images. The images could be taken months apart, but were sometimes obscured by a cloudy sky when the ideal phase and libration was reached.

In October 1858 De la Rue sent a stereoscopic photograph of the Moon to Sir John Herschel, who commented on its ‘transcendent and wonderful effect … as if a giant with eyes some thousands of miles apart looked at the Moon through a binocular’. De la Rue quoted Sir John’s remark in his 1859 Report on the present state of Celestial Photography in England, for the British Association for the Advancement of Science.

The unique contribution of Warren de la Rue to astronomy was recalled by Royal Astronomical Society President John Lee FRS (1783-1866) in 1862. Lee observed that the enlarged copies, viewed stereoscopically, had ‘brought to light details of dykes, and terraces, and furrows and undulations of the lunar surface, of which no certain knowledge had previously existed…’.

Warren de la Rue’s pioneering work was exhibited in November 1858 at the Royal Astronomical Society. Howlett’s glass positive photographs enlarged from De la Rue’s negatives, backlit and mounted on a bespoke reflecting stereoscope, displayed the Moon in Victorian virtual reality over a century before Apollo 11 blasted off. The Royal Astronomical Society reported that ‘The appearance of rotundity over the whole surface of the Moon is perfect; and parts which are as plain surfaces in the single photograph in the stereoscope present the most remarkable undulations and irregularities.’

De la Rue and Howlett’s brief collaboration ended one month later with the young photographer’s tragic death. But their symbiotic contribution to astronomy has been preserved in a rare stereoscopic photograph of two full Moons.

It was one small shot of the Moon, one giant leap for photography.