Alex was one of the winners of ‘The Pitch’ competition at the Royal Society’s Research culture: Changing expectations conference. 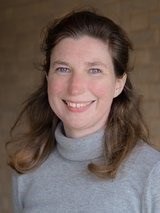 Executive Director of the Winton Centre for Risk and Evidence Communication

Dr Alex Freeman is the Executive Director of the Winton Centre for Risk and Evidence Communication, a role she took up in 2016. She previously spent 16 years working for the BBC, primarily a producer and director for BBC Science.

Dr Alex Freeman is the Executive Director of the Winton Centre for Risk and Evidence Communication, a role she took up in 2016. She previously spent 16 years working for the BBC, primarily a producer and director for BBC Science.

Alex was one of the winners of ‘The Pitch’ competition at the Royal Society’s Research culture: Changing expectations conference with her idea “Octopus: a radical new approach to scientific publishing”.

My pitch at the Research culture: Changing expectations conference

On that late October evening one year ago, when I walked up the steps onto the stage at the Royal Society, I was preparing to expose one of my most radical and passionately-held ideas to the public scrutiny of the scientific establishment.

A recent newcomer to the world of academia after a career in science television I had been shocked at many aspects of the worldwide research culture that had become apparent to me when I took a job at a university. I was of course aware of the ‘reproducibility crisis’ and exceptional cases of misconduct, both scientific and personal. What I hadn’t been prepared for was the full extent of the community’s reliance on the scientific publishing system – a system that was not designed or incentivised to bear the weight of this heavy responsibility.

If you forget how scientific work is shared and assessed now, and instead imagine how it could best be done, the current system would not enter anyone’s mind. In fact, I have never yet met anyone who thinks that the scientific publishing system is working perfectly well. Most people focus on the burden of publishing costs, but it seems to me that there are much deeper problems in the system which are affecting the way science is done. Perhaps it is because I come from outside the system that these problems seem so glaring and acute to me – or perhaps it just makes me incredibly naïve in thinking that there’s a relatively simple solution. But I do.

So it came about that I stood in front of the assembled illuminati of the Royal Society – including the editor-in-chief of the journal Nature – and announced that I wanted to replace both journals and papers as the means of sharing primary scientific research.

Radical as this sounds, I believe that it is a necessary step in order to improve both the research culture and scientific research itself. The publishing of papers has become almost the sole way that a researcher’s merit is measured, and so naturally most researchers end up concentrating their efforts on getting as many papers into as highly-perceived journals as possible. And of course this final aim drives the whole research process that leads up to the point of publication. This is where I think the most ingrained problem lies.

There is a fundamental difference between writing a narrative that sells a story – makes it engaging, concise and persuasive – and writing to communicate fully and exactly what was thought, considered, done, and with what consequences.

The first is essentially journalism, and success can rightly be judged on metrics such as readership and sharing on social media: how much people subjectively like it. But this is not what the primary research record is all about. Good science does not always (usually?) make a good story. In order to make progress on the problems we are all striving to solve in science, we need to communicate our ideas and work fully, to learn from and build on each others’ work. And ‘success’ needs to be judged on quite a different set of metrics: how well the scientific work has been done – whether that is coming up with new ideas, or methods or careful data collection, analysis, or application to the real world.

The current journal and paper system has, through natural forces, come to incentivise the former. In order to align incentives with good science, we need to move to a system in which work that is well thought-out, well carried-out, and well communicated – regardless of the ‘story’ it tells – is given the highest accolades. Changing what is rewarded will change what is done.

At this point in my 5 minute address to the Royal Society meeting I put up a slide to show my idea of what that new system could look like: a platform I called Octopus.

In my imagination, Octopus uses all the advantages of the digital world to make the publishing and reading of work not only entirely free but language-agnostic, using automatic language translation tools. Thus in one fell swoop it broadens access to the world of scientific endeavour. To keep costs minimal enough to sustain this, it is as fully-automated as feasible. There are no gate-keeper ‘editors’: authors take full responsibility for the editorial content and the formatting of their articles, and all reviewing is done transparently post-publication. In fact, reviews are treated as a publication in their own right, meaning insightful and constructive critiquing of work is incentivised. There is no advantage to ‘quantity over quality’ with publications either, because all publications (including reviews) are rated by their readers on pre-set criteria that allow the scientific community to define what makes ‘good science’.

Perhaps most radically, though, Octopus does not allow the publication of ‘papers’ in the old-fashioned sense. Instead, publications are one of eight kinds which link together to forms ‘chains’: Scientific Problems are at the top of the chain, followed by Hypothesis/Theory, Method/Protocol, Data/Results, Analysis, Interpretation and Real World Application. Each of these can only be published when linked to a publication of the type ‘above’ them in the chain (Problems can branch off from any publication, as can the eighth type, the Review).

These smaller units of publication will allow faster (and less time-consuming) sharing of work, and also smaller author groups. In turn this will make science more meritocratic and accountable as it will be clearer what contribution each author has made and allow more specialist, single-author work. At last, statisticians or technicians will be able to publish stand-alone analyses or protocols; anyone can publish data regardless of the size of the dataset (or what the data appears to suggest); researchers working with few resources can publish problems, hypotheses, methods, analyses, interpretations or reviews to as much acclaim as they can muster.

With my 5 minutes on stage up, I rushed through some of the other advantages I saw of Octopus: how it could save huge resources spent on administrating grant applications as funders could select well-rated hypotheses or protocols, say, and offer funding to multiple people to carry out the ‘next stage’ – increasing reproducibility at the same time; how journals could change their remit slightly – instead of trying to be the primary record, serving their readers’ needs by producing editorialised views on current research.

I ended on the practicalities: that whatever people thought of my idea, for me science was too important to leave in its current state without at least trying such a disruptive move. The Octopus platform, I argued, would be technically relatively easy to build so whatever the difficulties of the necessary cultural change, it seemed beholden on me – on us – to take the first step and get the system up and running in order to see how it worked in practice.

I felt this so strongly that I had no problem being so bold as to state it to the room. What their reaction would be, I didn’t know. Not until a live vote was held. When I saw the green bar of votes next to the word Octopus on the screen lengthen and lengthen I had such a feeling of excitement. Other people – people who knew the system and the culture far better than I did – agreed with me. The idea was worth trying.

The award from the night was £1,000 to spend on the next step for Octopus – but for me it was the vote of confidence from the audience and the judges that made the most difference. Now I knew that this was something I should dedicate my efforts to.

Within weeks I was sitting with a design company, working out how to allow people to visualise and navigate the chains of publications, and what the automated publication process would look like.

In the first week of January I heard that Mozilla were backing Octopus with a mini science grant, and by March I was talking about it at the biomedical transparency summit in Paris, off to talk at Harvard and MIT, and meeting people all across the UK with advice to give on how best to get Octopus built and used.

Now, less than a year after that night at the Royal Society, Octopus exists as a prototype. Built by a combination of a team of computer science students at Imperial College and software engineers bought by the Mozilla grant, all overseen by a volunteer technical architect, the full platform should be ready early in 2020.

Technically, then, as I said, it wasn’t so difficult to make happen. Next comes the challenge of creating cultural change. In order to make Octopus a place to publish (shortly followed by THE place to publish) I now need to seed it with all the existing scientific work that is not behind paywalls. To do this, I am searching for the perfect piece of AI that can scan Open Access papers, extract from them the key problem that they are addressing, and cluster them. Doing this will form the branching central nervous system of Octopus: the pre-existing structure to which all new publications will be linked.

Initially I think Octopus will be the place where people can come to find and read existing publications. Then they might start adding ratings, reviews, small data sets, hypotheses that they do not themselves plan to follow up… It will be quick and easy to publish, so why not? Meanwhile I will be working on getting recognition for Octopus within institutions and funders. If employers and grant-givers start checking researchers’ Octopus profiles (with their helpful peer ratings giving a better assessment of each piece of work’s actual merit) then I think it will start being used as a pre-print server: publish there first and then submit to a journal. Finally, that painful last step will become unnecessary. Octopus will become the primary scientific record. Work will be faster, less wasteful, and good work will be recognised and incentivised. And, importantly, any researcher, around the world, regardless of their language or resources, will be able to collaborate on the grand endeavour that is science.

That is the future that I want to see – and I am impatient to see it. Culture change can happen very fast when a model appears that serves everyone’s needs better than the existing model, and Octopus is designed to do exactly that. In another year’s time just perhaps I’ll be thinking back in disbelief to that fateful evening when I had 5 minutes on stage at the Royal Society and Octopus was just a dream.

Disclaimer: the views and opinions presented in this post are those of the author and do not necessarily reflect those of the Royal Society.