In November 2020 the UK hosts the next UN climate summit, known as COP26. But what is the context, in terms of climate science, in which this summit will take place?

'The message from us as scientists is clear, just as we said 30 years ago: the increased concentration is causing warming, with more to come.'

There has been a plethora of weighty reports in recent weeks (the Royal Society has written briefings on some of them) spelling out what climate changes have already occurred, and what are the likely impacts of future change as greenhouse gas concentrations in the atmosphere continue to rise.

The basic message is the same one that scientists have been presenting for 30 years.

The very first assessment report from the Intergovernmental Panel on Climate Change (IPCC) in 1990 estimated that global temperature would rise by 0.3°C per decade in a scenario with the highest emissions of carbon dioxide (labelled business as usual). This reduced to 0.1-0.2°C per decade in scenarios where increasing moves towards renewable energy and other measures were taken. In fact the trend since 1990 has been very close to 0.2°C per decade. The report warned that this would imply increases in extremes, particularly heatwaves, loss of Arctic sea ice, rising sea level, and changes to ecosystems.

We now have much more detail about the likely effects in particular regions, and the downstream impacts on marine ecosystems, water resources, agriculture and human health – to name a few.

The story continues to be:

Science brings us these warnings, but it also brings us potential solutions some of which have become reality since 1990; for example, cheap renewable energy sources, improved batteries for vehicles, and technology to capture carbon dioxide before it is released from power stations. The UK has adopted a legal target of net zero emissions of carbon in 2050, believing that the widespread adoption of these technologies, and other actions, make the target achievable.

However the recent COP25 summit in Madrid did not reflect the global ambition to keep warming below 2°, or even 1.5°, above preindustrial levels by 2100 that was expressed at Paris in 2015. If nations deliver on the reductions they have promised so far then global warming will most likely be about 3°C, so promises of deeper cuts are needed from major emitting nations if the goals of Paris are to be met. Furthermore many countries do not yet have policies to achieve the pledges they have made: even the UK is not, according to the UK Committee on Climate Change, on course to meet its legally binding targets. COP25 was unable to agree a text urging all countries to strengthen their targets in 2020, or to sort out issues with international trading of emissions. 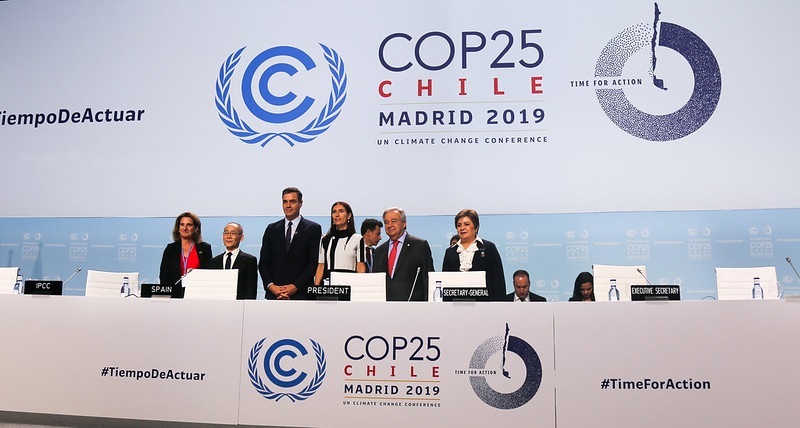 This all makes it challenging for the UK to make COP26 a success. Emissions need to decline to zero to halt the trend of climate change, and so far they are not only failing to decline, they are actually still increasing each year. Since 1990, when that first report was issued, annual fossil fuel emissions of carbon dioxide have risen from 23 to 37 billion tonnes. As a result the concentration of carbon dioxide in the atmosphere has risen from 354 to 410 parts per million.

The message from us as scientists is clear, just as we said 30 years ago: the increased concentration is causing warming, with more to come.

Does this constitute a “climate emergency”? There is no magic number of degrees beyond which everything is disaster, but every tenth of a degree makes the impacts worse, and if we want to be sure to stay clear of particularly dangerous consequences then we must avoid numbers like 3° or 4°. The problem is that since 1990, we have 30 years more of emissions in the atmosphere, and 30 years less to avoid reaching levels where very undesirable impacts occur.

The UK can use its own net zero target as a magnet to persuade other nations to follow suit, but of course we must make sure our own target is being met. Hosting COP26 means that 2020 is the right time to step up. As well as policy decisions, funding for research and development will be required to scale up the technologies that can help lower our greenhouse gas emissions. The UK can use diplomacy, trade and aid to share both the ambitious targets and the technological and policy solutions with other nations – and show that it continues to be an international leader on these global challenges.