Read more about the launch of two Turning the Pages digital reconstructions of catalogues of the specimens and instruments kept in the Royal Society Repository.

Last November, I attended an excellent conference organised at the Royal Society by the Collective Wisdom project, entitled Collecting and Collections: Digital Lives and Afterlives.

I have already confessed here and there to a benign obsession with the catalogues of the Royal Society collections. Today’s blogpost will serve as another declaration of my infatuation – which I hope is contagious.

Last November, I attended an excellent conference organised at the Royal Society by the Collective Wisdom project, entitled Collecting and Collections: Digital Lives and Afterlives. Here, I launched two Turning the Pages digital reconstructions of catalogues of the specimens and instruments kept in the Royal Society Repository in the seventeenth and eighteenth centuries.

The first is our copy of the first edition of our well-known 1681 Musaeum Regalis Societatis; or a Catalogue & Description of the Natural and Artificial Rarities belonging to the Royal Society and preserved at Gresham College, written by Secretary Nehemiah Grew. 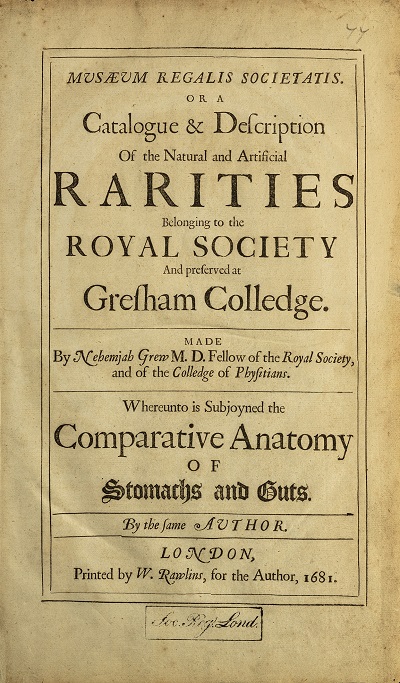 It is an important work of natural history, a descriptive catalogue of species, natural objects and some artefacts, complete with nomenclature. Grew frustratingly describes it as a work of ‘Promotion of Masculine Studies’ intended to ‘put some fresh Blood into [the] Cheeks’ of the Royal Society Fellows who were starting to look ‘a little pale’ – proof that catalogues are an object of excitement, at least for a bunch of pale-faced seventeenth-century gentlemen-scientists.

Grew’s catalogue isn’t, however, a very useful inventory of the Royal Society collections. Indeed, it does not locate the objects in the physical space of the Repository at Gresham College and its considerable value is in the taxonomic effort rather than as an exhaustive list. Built on our Turning the Pages facility by Rupert Baker and myself, it contains the full-text as transcribed and shared generously by Brent Nelson and his team of the Digital Ark at the University of Saskatchewan. Adding the text in the transcription facility was a slow process, but it makes the digital copy so much more useful, because it allows users to search for specific terms and to navigate through the volume.

'Skeleton of a Crocodile or of Leviathan', plate 4 from Nehemiah Grew, Musaeum Regalis Societatis, 1681

My one regret is that the large crocodile which is inserted as fold-out plate 4, page 457, is two clicks away on the side menu, rather than seamlessly folding open as you would in the library. The fold-out was so large that stitching it digitally proved to be impossible without additional development. This is a good lesson for anyone pondering the limits of digital displays: resizing an image to fit a screen size is a poor solution as it forces the content to adapt to the form, rather than the other way around. This highlights the flexibility of paper as a medium. Nonetheless, I hope this will be a useful resource to anyone interested in the history of the Repository; you can find more information in the introduction available on Turning the Pages, as well as an original map of the Repository.

The second digital catalogue is a unique and fascinating resource, which will require some patient digital manipulation on your part: an inventory of the collection referred to in archivist-shorthand as MS/416. It is in fact entitled ‘A Complete Catalogue of the several Donations of manuscripts, printed Books, naturall Curiosities, machines and antiquities’. 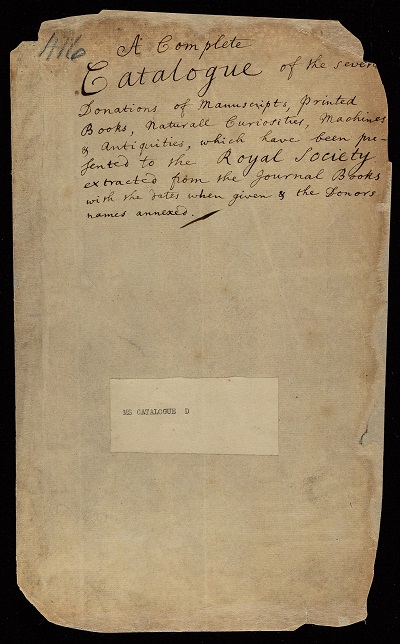 MS/416, ‘A Complete catalogue of the several donations… presented to the Royal Society’, ca. 1731.

Unfortunately, only the last three categories have survived and the lists of manuscripts and printed books have been lost. The catalogue was composed by the eight men listed at the bottom of the index, folios 3 and 4, at the request of a Repository Committee, which worked from 15 January 1730 to 30 October 1733. The list includes short descriptions of items, dates of donation and names of donors. Some items have been crossed out or checked by ink and pencil marks at different times.

The manuscript stands out in our collection because of its unusual vertical opening and binding, resembling Chinese-style stab sewing. The construction of the manuscript clearly responded to its day-to-day use as an inventory. The vertical orientation would have been practical for the clerks and curators who were checking the list against the physical items. It did, however, present a challenge to the Turning the Pages software, which means that to navigate around the manuscript you will need to use the various manipulation tools situated at the top of the left menu bar, by pressing the hand icon. The ‘move’ and ‘rotate’ tools are particularly useful to adjust the page to your screen, but don’t forget to deselect them to flip to the next page. Many extra slips of papers were pasted to the main manuscripts of this working document, and these are reconstructed as digital fold-outs. Yet another difficulty was that 12 blank folios were sewn in folded, which means they could not be digitised.

All these physical intricacies mean that MS/416 is a fragile archival item. Although beautifully restored before digitisation, its Chinese-style stitches remain delicate and we therefore hope readers will turn to the digital version to preserve the original. We’ve added some nifty functionalities to the digital version: the manuscript is transcribed, making the text fully searchable, and an index based on the classes of material listed in folio 1 is accessible from the menu through the calendar icon. Finally, to support further digital developments, we have made the transcription freely downloadable as a structured XML (press the ‘media’ icon in the menu).

As mentioned, the digital catalogues were launched in November 2019, so this blogpost is long overdue, but since the two physical catalogues are nearly 300 years old maybe I’ll be forgiven for taking my time.