The role of Royal Physician to the King or Queen was often given to a Fellow of the Royal Society.

Although royalty has always tended to provide more of a ceremonial role within the Society, occasionally the two overlap. The area in which this is most prevalent is medicine...

Ever wondered where the ‘Royal’ in ‘Royal Society’ comes from? The Society was established in 1660 when King Charles II gave his approval to plans by the Gresham College Group to create a scientific academy dedicated to the improvement of natural knowledge. Despite Charles II’s reputation as a ‘good-time King’ (the 12 illegitimate children seem to confirm this – and that’s just the acknowledged ones!), his provision in 1662 of a Royal Charter established the Society as a true scientific powerhouse, paving the way for discoveries aplenty.

Although royalty has always tended to provide more of a ceremonial role within the Society, occasionally the two overlap. The area in which this is most prevalent is medicine. The role of Royal Physician to the King or Queen was often given to a Fellow of the Royal Society. Perhaps the two most notable examples of Royal Physicians are Hans Sloane FRS and Richard Mead FRS, active during the reigns of Queen Anne, King George I and King George II.

Speaking of George II, as I was cataloguing items in a volume of the Society’s ‘Letters & Papers’ series, one letter in particular piqued my interest. It was entitled ‘Concerning the post-mortem examination of the body of the late King’ and was addressed to George Parker, 2nd Earl of Macclesfield (then President of the Royal Society) from the physician Frank Nicholls. Following in Sloane and Mead’s footsteps, Nicholls was a Royal Physician assigned to George II. He had previously lectured in anatomy at Oxford University, set up a physician’s practice in his native Cornwall, then settled in London. He was elected as a Fellow of the Royal Society in 1728 and became the Royal Physician in 1753.

The King’s unexpected death on 20 October 1760 has become somewhat infamous, as it is generally understood that he died on the toilet (something he has in common with another ‘royal’, the King of Rock and Roll). This is addressed by Nicholls in his letter, when he claims that ‘about 7. in the morning … a noise was somewhere heard, as if a large billet had tumbled down; &, upon enquiry, his majesty was found fallen on the ground, speechless and motionless … he appeared to have just come from his necessary stool, & as if going to open his escritoire [writing desk]’.

The day after the King’s death, Nicholls was sent to Kensington Palace with two sergeant-surgeons to embalm the royal body. While doing this, Nicholls performed a post-mortem, setting out his findings in a letter which was sent to and later published by the Royal Society in the Philosophical Transactions. The post-mortem provides an in-depth anatomical description of the deceased King. 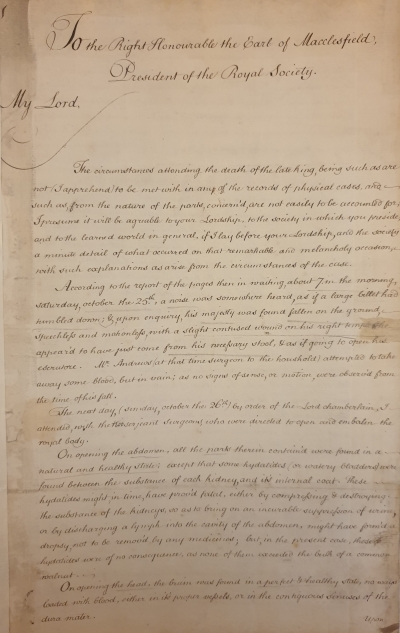 First, on opening the abdomen, all the organs were considered normal. The brain and lungs were also found to be in a healthy state. At this point, it was clear that the problem must have stemmed from the royal heart. Nicholls stated that the King had previously ‘complain’d of frequent distresses and sinkings about the region of the heart’ so it is assumed that he may have had underlying issues prior to death.

This is where things get gory. While examining the heart, Nicholls noted that ‘its pericardium was found distended, with a quantity of congealed blood, nearly sufficient to fill a pint cup; and, upon removing this blood, a round orifice appear’d in the middle of the upper side of the right ventricle of the heart, large enough to admit the extremity of the little finger’. He surmised ‘that the aorta had suffered a more extraordinary and violent distention, immediately antecedent to the bursting [of] the ventricle, is evident, from the recent fissure of the aorta, and the consequent extravasation of blood between its coats’.

But back to the toilet. Nicholls believed that the immediate cause of the dissection was the pressure on ‘all the contents of the lower belly’, which subjected ‘the trunk of the aorta, and all its upper branches, to a surcharge with blood continually encreasing, in proportion, as the pressure may happen to be continued longer, or exerted with greater violence, in consequence of a costive habit or any other resistance’. I think we can piece together what this means.

Today, this is known as an aortic dissection. Nicholls’s paper is generally recognised as providing the first clear account of this phenomenon, and he is considered an early pioneer in the study of blood vessels and arteries. His interest in the topic is evident by some early articles sent to the Royal Society, including ‘Observations of aneurisms [aneurysms] in general‘, published in 1728. To demonstrate his findings, Nicholls added a plate to his King George II paper which clearly shows the damaged ventricle: 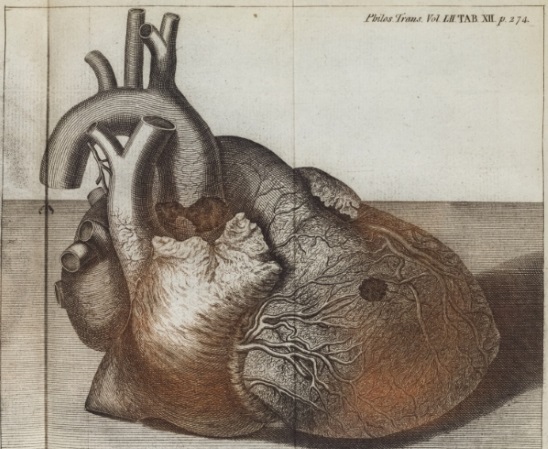 George II, who reigned for thirty years, was succeeded to the throne by his grandson George III in 1760. Frank Nicholls went on to live for a further eighteen years before succumbing to tuberculosis in 1778. His royal post-mortem is an excellent example of the progress made in anatomy in the eighteenth century, and is one of the most fascinating items in the Royal Society’s collections.