Watch the skies! On Asteroid Day, Jon Bushell takes a look at the early years of asteroid spotting and the risks to human life of a major impact.

Ceres was initially accepted as the eighth planet, neatly fitting the gap identified by the Titius-Bode law, but the story quickly got more complicated.

Today marks the seventh international Asteroid Day, an annual event promoting awareness of asteroids and the risks they pose to us here on Earth.

Close encounters with these objects are not as uncommon as we might think. Asteroid 2020 LD, which is over 120 metres in diameter, recently passed the Earth at a distance of just 190,000 miles, nearer to us than the Moon. And if that’s not enough, scientists didn’t even spot it until 7 June, two days after the space rock had already whizzed by at around 60,000 miles per hour!

Asteroid Day also marks the anniversary of the 1908 Tunguska event, the largest explosive encounter from space in recorded human history. While classed as an impact event, the asteroid (or comet?)  detonated a few miles above the ground, levelling around 830 square miles of forest in a remote part of eastern Russia. Asteroid Day is all about highlighting impact events and near misses, and encouraging greater monitoring efforts to identify these potential threats before they arrive. You need only look at the mass extinction at the end of the Cretaceous period, when the Chicxulub asteroid impact wiped out three-quarters of all life on Earth, to see that passing hazards are worth monitoring. 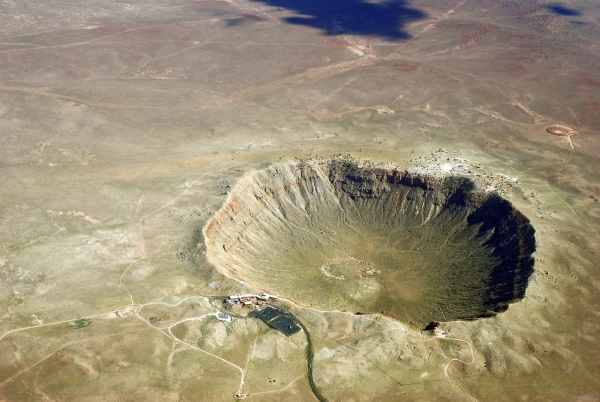 Before the start of the nineteenth century, asteroids were an unobserved and unknown phenomenon to astronomers. The term ‘asteroid’ was first coined by William Herschel in 1802, although it wasn’t widely adopted until much later. Herschel’s contributions to astronomy, along with those of his sister Caroline, were significant, and it was his discovery of Uranus in 1781 – an observation he initially reported to the Royal Society as a comet – that would lead scientists to discover the first asteroid twenty years later. 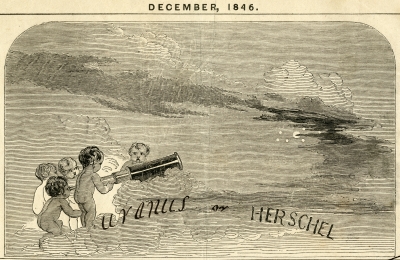 Mythological interpretation of the planet Uranus, by Kenny Meadows, from the 1846 edition of the Illustrated London Almanack

The discovery of Uranus, the seventh planet in the solar system, fuelled interest in a mathematical theory known as the Titius-Bode law. This was developed by Johann Daniel Titius in 1766, and gained widespread recognition a few years later through the writings of Johann Elert Bode. The law proposed that every planet was twice as far from the Sun as its predecessor; although this theory has long since been discredited, by pure coincidence Uranus’s orbit fits the model almost perfectly. If the law had been accurate, there should been another planet between Mars and Jupiter. Astronomers became convinced there was a discovery just waiting to be made. The hunt was on.

Baron Franz Xaver Zach was one astronomer who joined the search. Born in Hungary, in the 1790s he was working  as the director of the Gotha Observatory in Germany, and would  go on to be elected as a Fellow of the Royal Society in 1804. He concluded that the prospect of finding a new planet was greater if a group of astronomers cooperated to chart different portions of the night sky. This led to the foundation in 1800 of the ‘Celestial Police’, a group of two dozen scientists from across Europe, collaborating to find the predicted planet.

They were beaten  by an Italian priest and astronomer, Giuseppe Piazzi. In January 1801, Piazzi was at his observatory in Palermo, when over several nights he observed a moving star. Initially he reported this as a comet, just as Herschel had done with Uranus. However, he also wrote to his friend and fellow astronomer Barnaba Oriani, a member of the Celestial Police, and ventured the opinion that this might be the fabled missing planet. Piazzi named his discovery Ceres, after the Roman God. 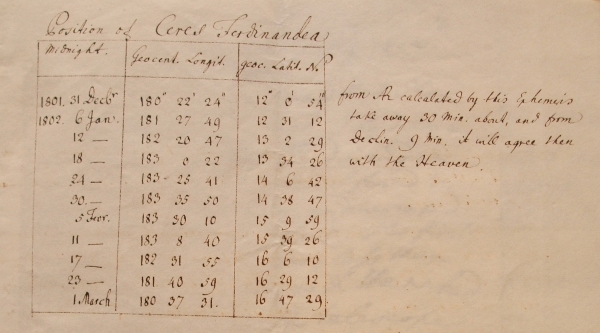 Data on the position of Ceres, in a letter from Franz Xaver Zach to Nevil Maskelyne, titled 'Observations at Seeberg, Gotha of Piazzi's new planet, Ceres Ferdinandea' (L&P/12/4)

Ceres was initially accepted as the eighth planet, neatly fitting the gap identified by the Titius-Bode law, but the story quickly got more complicated. Astronomers were able to make an estimate of the size of Ceres, and it was clear that the object was far smaller than any of the other known planets. Matters became even trickier when several more bodies  were discovered in roughly similar orbits to Ceres: Heinrich Olbers discovered Pallas in 1802 and Vesta in 1807, and Karl Harding discovered Juno in 1804. Writing about Ceres and Pallas in the Philosophical Transactions in 1802, William Herschel concluded that these bodies were too small and their orbits too close together to be genuine planets, and neither did they display the usual properties of comets.

Herschel’s idea wasn’t widely adopted at first. Asteroids continued to be classified as planets until a spate of further discoveries, starting with Karl Ludwig Hencke’s observations of Astraea in 1845 and including Parthenope and several others spotted from Naples. Astronomers began to accept that Hershel was indeed correct, and the term asteroid moved into general use in the 1850s. 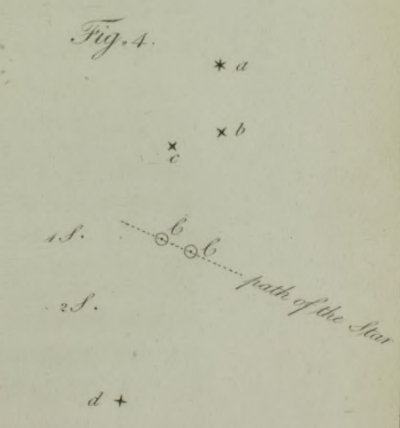 Figure showing the path of Ceres (‘C’) from ‘Observations on the two lately discovered celestial bodies’ by William Herschel, published in Philosophical Transactions of the Royal Society volume 92 (1802)

A prevailing notion was that the asteroid belt represented the remains of a planet that had been destroyed, which ensured these discoveries still fitted the pattern predicted by the Titius-Bode law. The discovery of Neptune in 1846 largely discredited the model among astronomers, but this theory for the formation of the asteroid belt persisted well into the twentieth century.

These days, we’re more aware of the risks that asteroids pose, as modern computer technology has allowed astronomers to detect them with much greater speed and accuracy than was possible with nineteenth-century techniques. Although the majority of the solar system’s asteroids are found in the asteroid belt, more than 20,000 have been logged in orbits that bring them close to the Earth. Small-scale impact events causing minimal damage are quite common; events on the scale of Tunguska, by contrast, are estimated to occur only once every few centuries, but most astronomers agree that the next major impact is a case of when, not if. The message of Asteroid Day is clear: keep a close eye on the night sky, lest we end up like the dinosaurs!