Professor Stephen David Snobelen shares his experience of searching for obscure epigrams by Isaac Newton, and one inscription in particular which led to the solving of a mystery.

"Loss of information is part of the landscape when studying the past. Historians come to expect to this sort of thing."

History of Science and Technology

It started as a footnote.

This is only a modest exaggeration. In Spring 2017 I was reviewing examples of Isaac Newton’s statements on the relationship between God and natural philosophy for a paper I was writing. One of these is a line from the Apocrypha’s Wisdom 11:20 that Newton wrote out as an epigram on 13 July 1716 and that had been sold by Sotheby’s London back in 1998. I had first seen the auction notice in 2012. I came across another mention of the same item in 2013. As I had the year before, I merely noted the small manuscript as something to study later.

Later came in Spring 2017 when I decided that the epigram would make an illuminating footnote to my paper. Curious to see if Newton had deployed the same epigram on other occasions, I did a quick search online. This revealed not only free-floating, decontextulised examples of the line misattributed to Newton’s own authorship, but a second example. In this case, an epigram dated to 1722 that appeared in a Transylvanian-Hungarian student’s album amicorum. Immediately I recognised a pattern. The 1716 example, too, must be from a student autograph book. 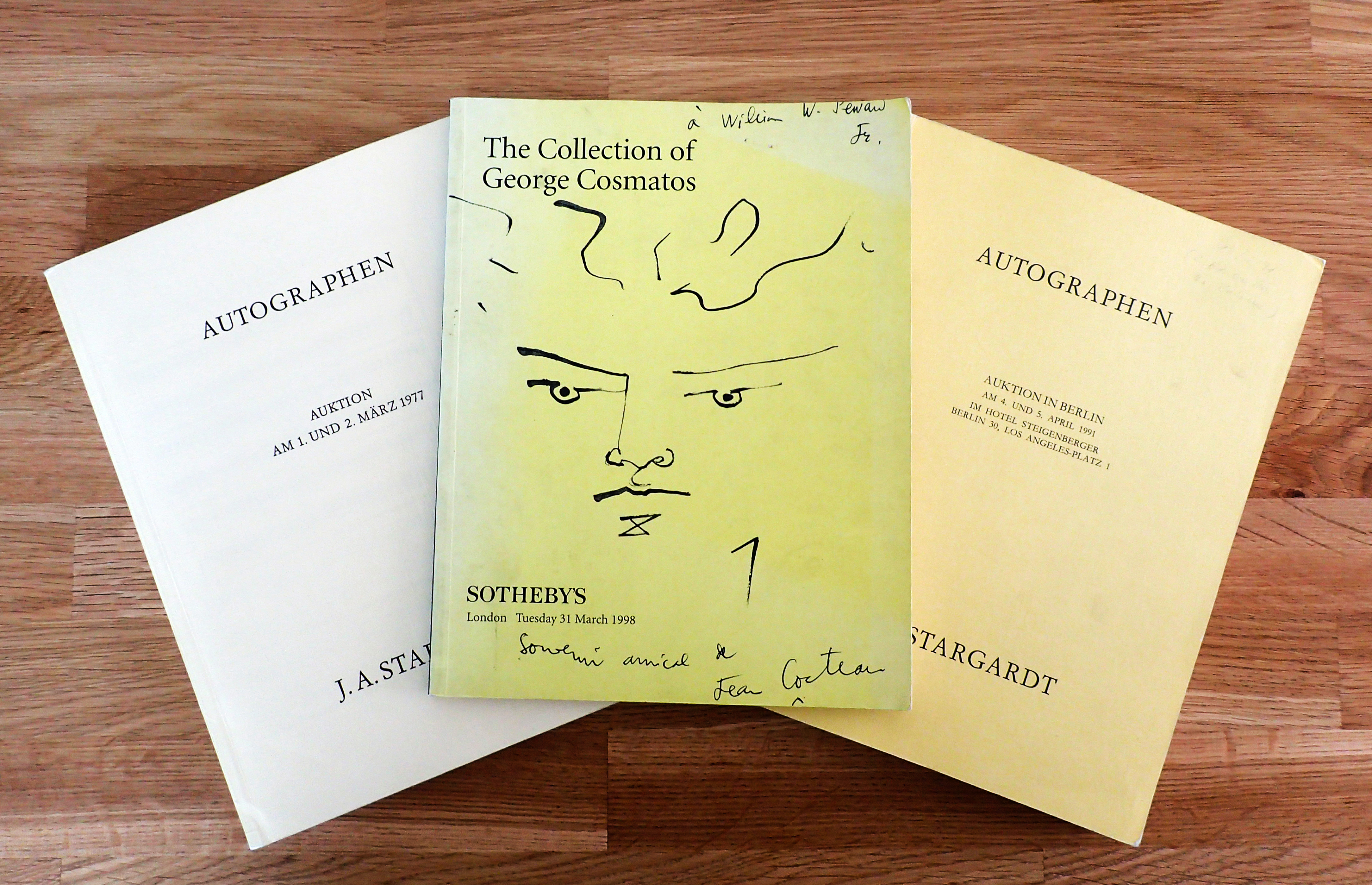 Within a few days I had records of five inscriptions Newton had made in alba amicorum. This includes one I had transcribed back in 1994 not then knowing that it fit into a larger pattern. I also traced two earlier sales of the 1716 epigram in 1991 and 1977 by the German auction house J. A. Stargardt.

These endlessly fascinating autograph books have been called the ‘social media’ of their time. Students from the Continent carried the albums with them on their post-graduation educational tours and collected epigrams from learned and notable men (and occasionally learned and notable women). Some student autograph seekers obviously valued an inscription from Newton, who had become famous in the wake of the 1687 publication of his Principia mathematica.

After drafting a rather lengthy paper on Newton’s album inscriptions and his use of Wisdom 11:20, I mentioned my findings to my Newton Project colleague Scott Mandelbrote of Peterhouse, Cambridge. I was stunned when he told me that the Anglo-Hungarian scholar and poet George Gömöri was working on precisely the same topic.

I say “stunned” because I had taken the topic to be on the far side of the obscure. I contacted George and was delighted to receive from him a draft of a paper on the topic and to learn that he too had identified five Newton album inscriptions. We each had one unique example (mine being the one from 1716), so together we had a total of six.

George and I combined our efforts, enlarged the project and by May 2019 had identified two more Newton inscriptions. We ended up once again with two papers, this time co-written. One details the eight Newton album inscriptions. The other traces the footsteps of the six Continental album owners as they went on their peregrinations and also details the circumstances when the two English album owners obtained their Newton epigrams.

The first paper appears in the September 2020 issue of Notes and Records. The second appears as an online supplement to the same number. Those who wish to enter the intriguing world of the early modern Republic of Letters and learn more about Newton’s strategies for being remembered through apt album dicta will find much, much more in these accounts. But here I want to explain how we solved a mystery.

Before we talk about the mystery, let’s take a look at that 1716 inscription. Here is a photograph of the inscription taken from the 1977 Stargardt auction catalogue: 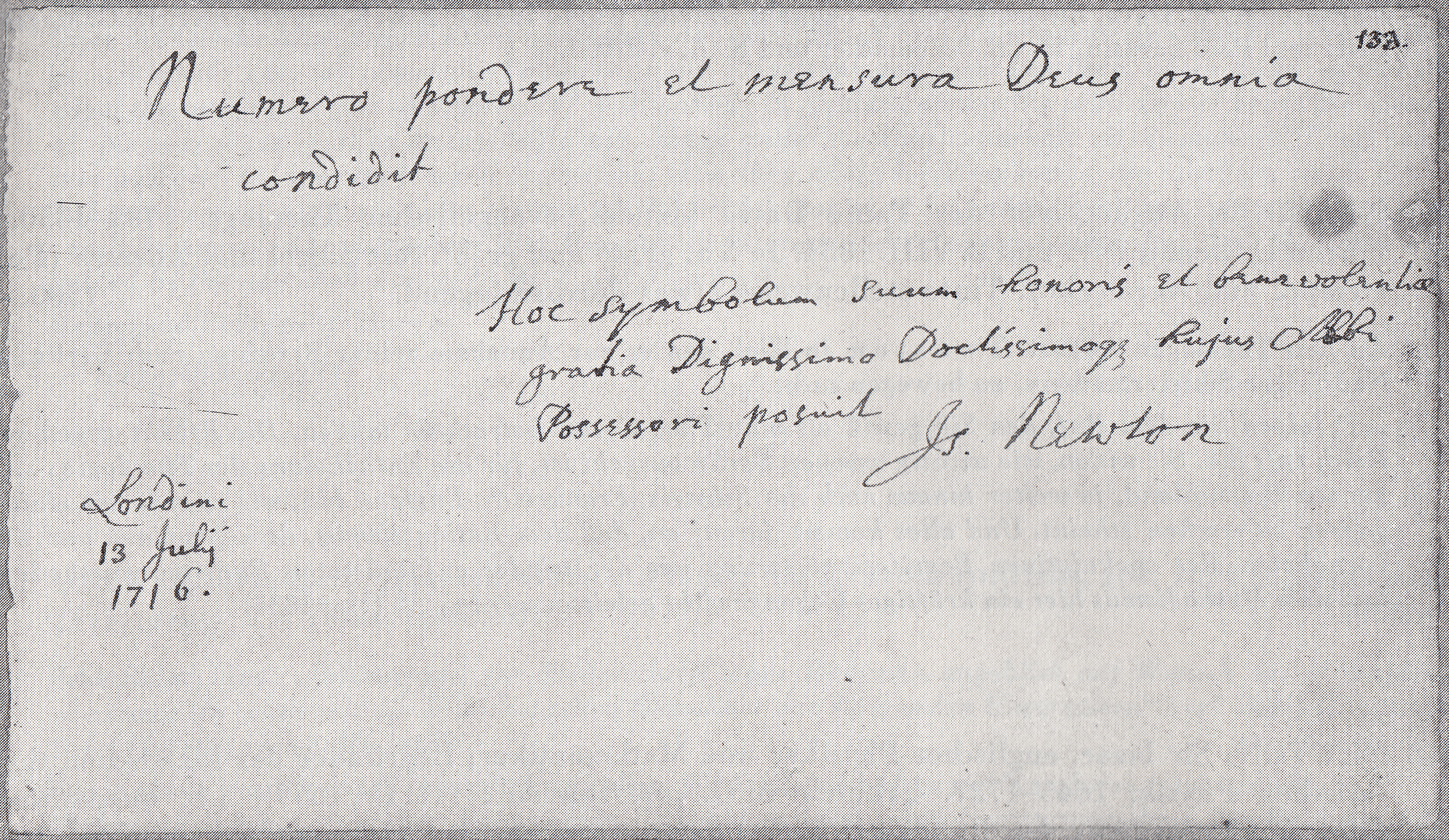 In translation, Newton’s chosen seven-word epigram reads: “God has established all things by number, weight and measure”. It’s a close paraphrase rather than a precise quotation from Wisdom 11:20. The line was commonly recited by Medieval and early modern natural philosophers, mathematicians and theologians. For Newton it would have neatly summed up his belief that God had created a universe that can be comprehended with the powerful tools of mathematics.

The dedication reads: “Isaac Newton has placed this his sign of honour and benevolence on account of the most Worthy and most Learned Owner of this Album”. While Newton’s name is prominently displayed, the album owner’s is not. This is not uncommon for these album dedications. It’s just that these dedications are normally found in albums whose owners’ names are part of the record. It was disappointing not knowing who obtained the 1716 inscription, but we accepted that the owner’s identity was likely now unrecoverable. Loss of information is part of the landscape when studying the past. Historians come to expect to this sort of thing.

That said, both George and I cast wide nets in our search for Newton album epigrams and it was this strategy that yielded an unexpected dividend. Going through the process of tracing as many people as possible who had met with Newton, we landed on the name of Swedish student Matthias Asp (1696–1763). A dry-as-dust nineteenth-century biographical dictionary, given new life in the Digital Age as a searchable online resource, provided the essential clue. (I say ‘dry-as-dust’ somewhat tongue-in-cheek; whilst perhaps not quite so gripping as adventure novels, for a pedant like me these old tomes are not only useful but endlessly fascinating). The dictionary’s entry on Asp stated that he had enjoyed several meetings with Newton in 1716. Hopeful that Asp had kept an album that was still extant, I searched Uppsala University Library’s indispensable Alvin database and discovered that Asp had indeed kept an album. What’s more, it survived at Linköping City Library in Sweden.

Immediately on this discovery, I sent an e-mail to Linköping City Library to ask for confirmation and to see if by any chance the album contained a Newton inscription. Knowing that Asp apparently met with Newton, I was reasonably hopeful but was prepared for a negative result. After two years of hunting high and low for Newton inscriptions, I had become inured to what is the common outcome. Librarian Stina Brodin responded to my inquiry right away, confirmed that her archive certainly did hold the album and then delivered the news: the album did not contain a Newton inscription. But, and this is a very important ‘but’, this is because the Newton leaf had gone missing sometime before the summer of 1969. The missing leaf was numbered 133–134. 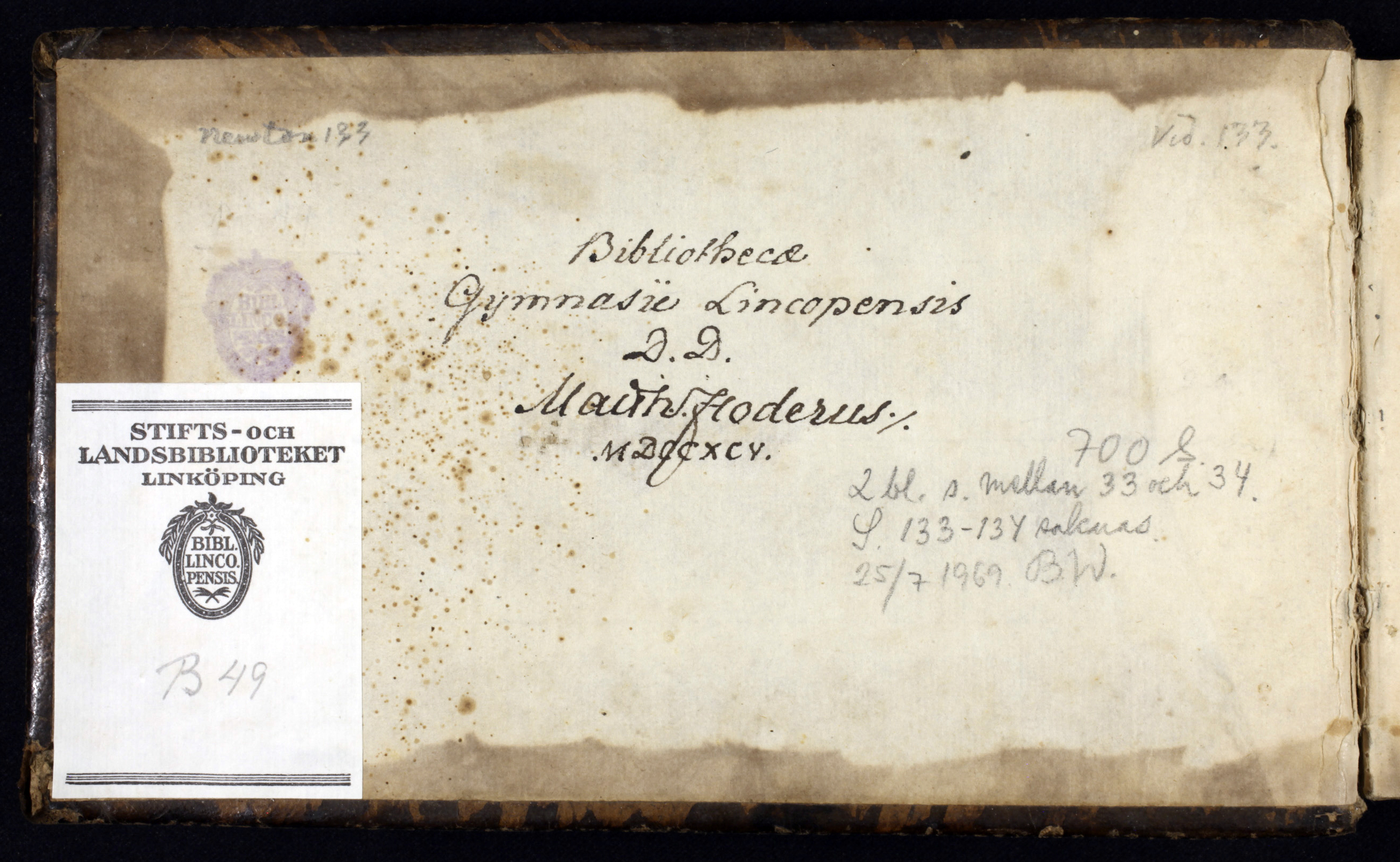 The inside front cover of Matthias Asp’s album amicorum showing the reference to the Newton leaf and Brita Wastenson’s 25 July 1969 note. Stiftsbibliotek, Linköping, MS B49 (used with permission).

Instantly, I realised that we did not have the completely new Newton inscription that we had hoped to find, but a positive identification of the album owner for which we had given up hope of ever finding. Ms Brodin kindly took a photo of the inside front cover of Asp’s album and e-mailed it to me. An ink note records Asp’s grandson Matthias Floderus’s 1795 gift of the book to the library. Intriguingly, there is also a pencil note dated 25 July 1969 indicating that leaf 133–134 was by that date missing. The initials “B.W.” stand for Brita Wastenson, then a librarian at Linköping.

Now, “missing” (saknas in Swedish) is a rather neutral and diplomatic word that doesn’t quite capture the nature of the leaf’s taking leave of the album. The older pencil note at the top that in Latin says “see 133” was likely written after the volume arrived at the library. As we can’t at the moment rule out other possibilities, however remote they may be, perhaps we shouldn’t use such a strong word as ‘theft’, although that is the most reasonable conclusion. The leaf’s appearance in the auction trade as early as 1977 is certainly consistent with it being a targeted operation. So for the time being let’s just say that the leaf left its album and its library home unwillingly. It wasn’t checked out at the circulation desk.

Although there is no conclusive evidence of who took the Newton leaf from Asp’s album in the 1960s, the late Swedish archaeologist Ragnar Engeström is a possibility. He stole two copies of Newton’s Principia from Swedish archives in the 1990s and is a strong candidate in the theft of a Principia from Uppsala University Library in 1968. Anyone who can take entire quarto volumes out of libraries unnoticed wouldn’t be overly challenged by tucking a small piece of paper in their sleeve and sauntering out the door. But someone else could have done the same.

It is our hope that the leaf will one day make its way back to its original and rightful place in Asp’s album at Linköping, just as Uppsala’s Principia was returned in 2009 after circulating in the auction trade for years. In the meantime, the Linköping City Library has done the next best thing, thanks to modern technology. With the gracious permission of the German auction house J. A. Stargardt, the Newton inscription has been brought together with the rest of Matthias Asp’s album in a full digitisation. It’s a virtual homecoming and long overdue.

The digitally restored album can be viewed on the Alvin portal by searching for “Matthias Asp”. I would like to thank Stina Brodin of Linköping City Library and Per Cullhed of Uppsala University Library for their help and professionalism. I would also like to express my gratitude to George Gömöri for a rewarding collaboration in our study of alba amicorum graced with Newton’s inscriptions. George and I would be delighted to hear from anyone who has any additional information on Newton inscriptions in alba amicorum—whether in archives, private collections or listed in auction catalogues.