The Royal Society has filled one of the gaps in its presidential portraits collection with a recent acquisition. But who is the lady in the accompanying painting? Ellen Embleton takes a look.

The true colour scheme of the portrait and its richly-painted fabrics was revealed by the beautiful clean-up job of our painting conservator.

The presidential portraits of our collection are undoubtedly among some of the finest, from John Closterman’s Christopher Wren to Bryan Organ’s Martin Rees. Early Presidents were asked to donate their own likenesses, and by the later nineteenth century small committees of Fellows would club together to commission a work as a ‘thank-you’ for Presidential services to science. However, it was only in 1941 that the Royal Society took over the business of these artworks as an organisational formality at the end of each presidential term. As a result, there are many gaps in the early years.

These MIA Presidents were listed in a Notes and Records article. Since then we have managed to track down a few of the incumbents. In the 1970s we accessioned this portrait of T.H. Huxley and accepted one of G.B. Airy on permanent loan from Cambridge. By the early 2000s we had accessioned Charles Montagu and, as of late last year, we can tick another off the list: Cyril Wyche, PRS 1683-1684.

Sir Cyril Wyche (c.1632-1707) was primarily a political administrator, acting as M.P. for several constituencies between 1661 and 1705 and Chief Secretary for Ireland from 1692. However, his interests were more diverse than this would suggest. He studied at Oxford, where he met the like-minded thinkers with whom he would go on to become an original Fellow of the Royal Society. Wyche was one of the leading figures in the re-established Dublin Philosophical Society of the early 1690s, and later became involved in the development of financial services, acting as a trustee for a society insuring London houses against fire. 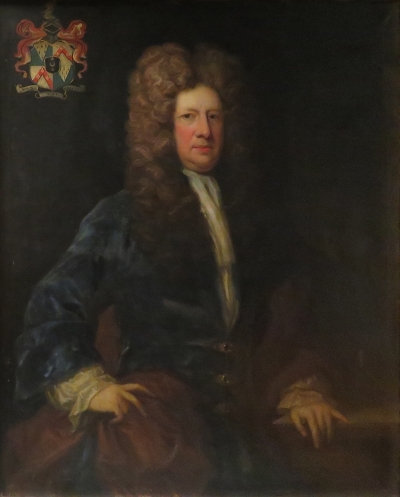 Portrait of Cyril Wyche by an unknown artist (c.1700)

Sir Cyril’s likeness strikes a nice balance, portraying him with all the easy confidence and dignity of an early modern gentleman without seeming overly grandiose. We see him at three-quarter length, allowing him to stand out in his blue-coated finery. His thoughtful face and stance, slightly turned towards the viewer, makes us feel almost as if he is about to strike up a conversation.

The Wyche coat of arms in the top left corner (as viewed) invited his contemporaries to reflect upon Sir Cyril Wyche’s origins, and may inspire different reactions today. He was from a family of merchants, and his grandfather, Richard Wyche, was one of the earliest Directors of the East India Company, establishing the family history within the broader narrative of British merchant-adventurers and colonial expansion. While the EIC’s royal charter initially gave it the ability to ‘wage war’ to fight rival traders only, its army was used to forcibly annexe a number of regions of the Indian subcontinent.
Accessioned at the same time as this portrait of Cyril was a partner piece: 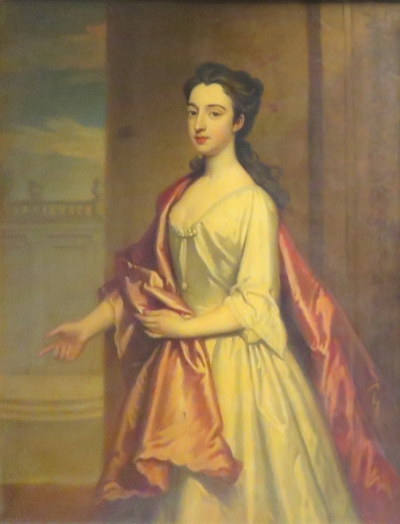 Both pictures are presumed to have hung in Hockwold Hall, the contents of which were recorded by Prince Frederick Duleep Singh in his Portraits in Norfolk Houses (1927). Sir Cyril’s painting is photographed in the book; the young woman’s portrait is far less obvious to glean from the brief printed descriptions and partial identifications there. There is a family tradition (never the most reliable means of identification) which pairs the work with Sir Cyril, as one of his wives.

If that is the case (and it’s a big if) then based upon a partial date found in the bottom right of this portrait, the sitter could be Mary Wyche (née Evelyn), Cyril’s third wife and niece of diarist John Evelyn FRS (1620-1706). Here, the sitter is presented in a serene manner, inviting the viewer outdoors and into the classical architecture of a terrace. The true colour scheme of the portrait and its richly-painted fabrics was revealed by the beautiful clean-up job of our painting conservator, captured in these before-and-after shots: 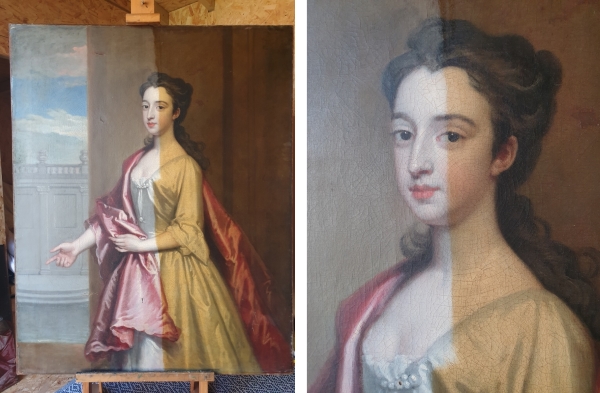 Portrait in mid-conservation: the right-hand side is obscured by a discoloured natural varnish, the left reveals the true colours at play.

I took to the Internet to find out a little more about Mary and was intrigued to discover descriptions of her as a ‘reluctant gentlewoman’. As revealed by research undertaken at the British Library, Mary had little interest in obeying her father’s wishes or in learning the proper management of a household. She flouted the rules surrounding ‘respectable’ sleeping habits, and from a young age seemed much too happy in her own company, announcing that she had no intention of marrying. Indeed, she rejected several suitors before agreeing to marry Wyche.

Far more research is required to properly identify Cyril Wyche’s companion. Meanwhile, once hung, the artworks will introduce an additional female face to the walls of Carlton House Terrace, continuing our efforts to promote a more gender-balanced set of displays.