Global trends in wildfire and its impacts

'Society needs to understand that we live on a flammable planet ...'

Fire activity is on the rise in some regions, but when considering the total area burned at the global level, we are still not seeing an overall increase.

Back in 2016, Philosophical Transactions B published a theme issue ‘The interaction of fire and mankind’. One of the articles, ‘Global trends in wildfire and its impacts: perceptions versus realities in a changing world’ discussed how the global area burned has overall been decreasing over the last decades. Given the news of devastating wildfires in California and Australia, we caught up with authors, Professor Stefan Doerr from Swansea University and Dr Cristina Santín from Swansea University and UMIB-CSIC, Spain, to find out whether things have changed since its publication. 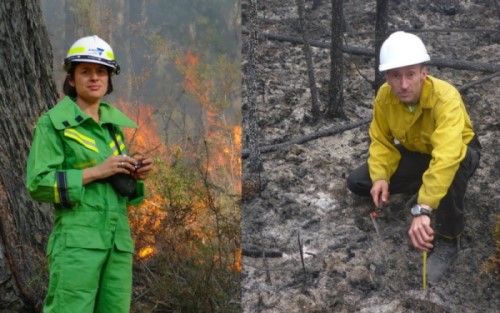 In your 2016 paper you concluded that the global area burned has overall decreased in the last decades. Has this trend changed recently?

Since we compiled the data for our study in 2015 there have indeed been many extreme fire events around the world: California in 2017, 2018 and, again, right now; Portugal in 2017; Greece in 2018; Australia 2019-20 - we could go on. So, there is no doubt that, as explained in our paper, fire activity is on the rise in some regions, such as the western side of North America. And very importantly, associated with these regional increases, we are already seeing a rise in fire impacts, for example in the number of fatalities. In the 20 years preceding our paper, an average of 71 deaths per year had been recorded in wildfire disasters. Since 2015, this has risen to 122. That noted, when considering the total area burned at the global level, we are still not seeing an overall increase, but rather a decline over the last decades. This has been confirmed in a series of subsequent studies, using data up to 2017 or 2018.

This may sound counter-intuitive. The global decrease is mostly driven by less fire in savannahs and grasslands, mainly in Africa, but also in South America and Australia. In quantitative terms, fire in those grassy ecosystems account for around 70% of the total global area burnt, so the reduction in fire activity here outweighs the increase in burned area that we are seeing in other parts of the world.

Based on this global decline, your study has been used by some to argue that climate change has not made fires worse or even to deny the existence of anthropogenic climate change. Does your study provide any evidence to support these views?

Not at all. The decline in global average area burned has indeed been misused to support false claims numerous times. There is strong evidence that the increase in fire activity we are seeing in many forested regions is indeed linked to climate change. Even the decrease in fire in tropical savannas that we just mentioned does not mean that climate change is not having an impact there too; actually, quite the opposite. This reduction has been in part attributed to conversion of savanna to agricultural land but, also, to shifting rainfall patterns that reduce the overall flammability of grasslands.

So what is the likely role of climate change in the many catastrophic fires that have occurred since your study was published?

Several attribution studies demonstrate that climate change is a key factor contributing to the severity and extent of recent large-scale fire incidents. For example, it has been estimated that climate change made the extreme 2019/2020 Australian bushfire season 30% more likely. The ongoing increase in fire activity in the western US, and the trend towards more severe fires in the southwest US reported since our 2016 paper, seems to be ‘fuelled’ by an increase in susceptibility to burning due to biomass dryness.

Having said that, it is very important to acknowledge that it is not only climate change, but other human actions that increase the fire problem in many regions of the world. For example, in North America, there has been a huge growth in the Wildland-Urban Interface (where houses are near or within vegetated areas, such as forest) over the last few decades. Living surrounded by vegetation may be attractive, but it is the worst place to build a house from a fire risk perspective.

In parts of Europe, a key human driver is the change in land-use. Large areas that used to be agricultural or grazing lands are now abandoned and often replaced by more flammable forest or shrubland. If you picture for example an abandoned grassland transitioning (by natural vegetation succession) into dense heathland it is easy to realise why that makes the fire problem worse.

Other human factors that contribute to a worsening fire problem include arson and accidental ignitions, which is how the majority of fires start in the more densely populated parts of the world. In addition, very aggressive fire suppression policies over much of the 20th century have removed fire from ecosystems where it has been a fundamental part of the landscape rejuvenation cycle. That has, in some regions, led to an excessive build-up of fuels (i.e. vegetation susceptible to burn), and then, when the “right” conditions for fire happen (dry vegetation, hot temperatures, strong winds) those fires are larger, more severe and often unstoppable, as they surpass any suppression capability.

Clearly forest/land management has a role to play too - what could be done better to prevent these extreme fire events?

We can reduce fire risk. Effective measures include managing the vegetation around communities to reduce the chances of high-intensity fires, and building houses from more fire-resistant materials. This remains particularly important in North America where flammable wood materials are still widely used in construction. Another obvious but quite contentious measure is the “zoning system”, similar to what is done with flood risk, where houses cannot be built in areas where fire risk is too high.

When we talk about fire risk it is important to keep in mind that we are focusing on reducing the potential impacts of fire on humans. We cannot completely remove fire from the landscape - that is the misconception that led to the ‘100% fire suppression’ policies in the US and elsewhere that have made things worse in many cases. Not letting a fire burn often makes the next fire worse, as by then even more fuel will have accumulated. Society needs to understand that we live on a flammable planet where fire has been shaping ecosystems for over 400 millions years. It will be still here in the future, no matter what we do, so we need to acknowledge this and learn to co-exist. It is logistically not feasible, nor ecologically appropriate, to reduce the flammability of all areas of forests or other wildland vegetation that is susceptible to fire.

Read more articles about the science of fire from across our journals.