Preprints and Proceedings B – the story so far

“The feedback from authors as well as on social media suggests that the team was accomplishing their goal of raising awareness of Proceedings B amongst researchers who previously may not have considered the journal.”

In 2017, Proceedings B appointed Dr Maurine Neiman from the University of Iowa as our Preprint Editor. This initiative centred on soliciting papers deposited in the preprint server bioRxiv with the aim of increasing the disciplinary breadth of the journal beyond the core areas of behaviour, evolution, and ecology that make up the bulk of journal submissions. Four years on, the preprint team have published a new paper reflecting on the development, implementation, and impact of this initiative.

How it all began

Preprints are manuscripts posted on public servers that do not yet have formal certification of peer-review from a scholarly journal. Proceedings B embarked on this initiative in a quest to use preprints to broaden the scope of papers published and to raise awareness of the journal across all areas of biology. Our preprint editor was also hoping to increase the visibility of preprints as a legitimate and effective means of making research accessible and as a mechanism to increase scholarly productivity. As there are thousands of manuscripts on bioRxiv and Proceedings B’s disciplinary breath is great, Dr Neiman decided to form a preprint editorial team, recruiting about 20 members from University of Iowa graduate and undergraduate students and postdocs, allowing them the opportunity to interact directly with the scientific publishing process. Together, they formulated a process whereby each member was designated a particular subject area in bioRxiv and would scan through manuscripts on a monthly basis. The team carefully assessed promising papers and made a list of papers that seemed potentially appropriate for submission. Dr Neiman would then check each prospective solicitation and make a final decision on whether to email the corresponding author to encourage a submission (see figure below). Within a few months, the team developed a system that allowed them to efficiently survey hundreds of papers from across biology and to invite authors using personalised emails. 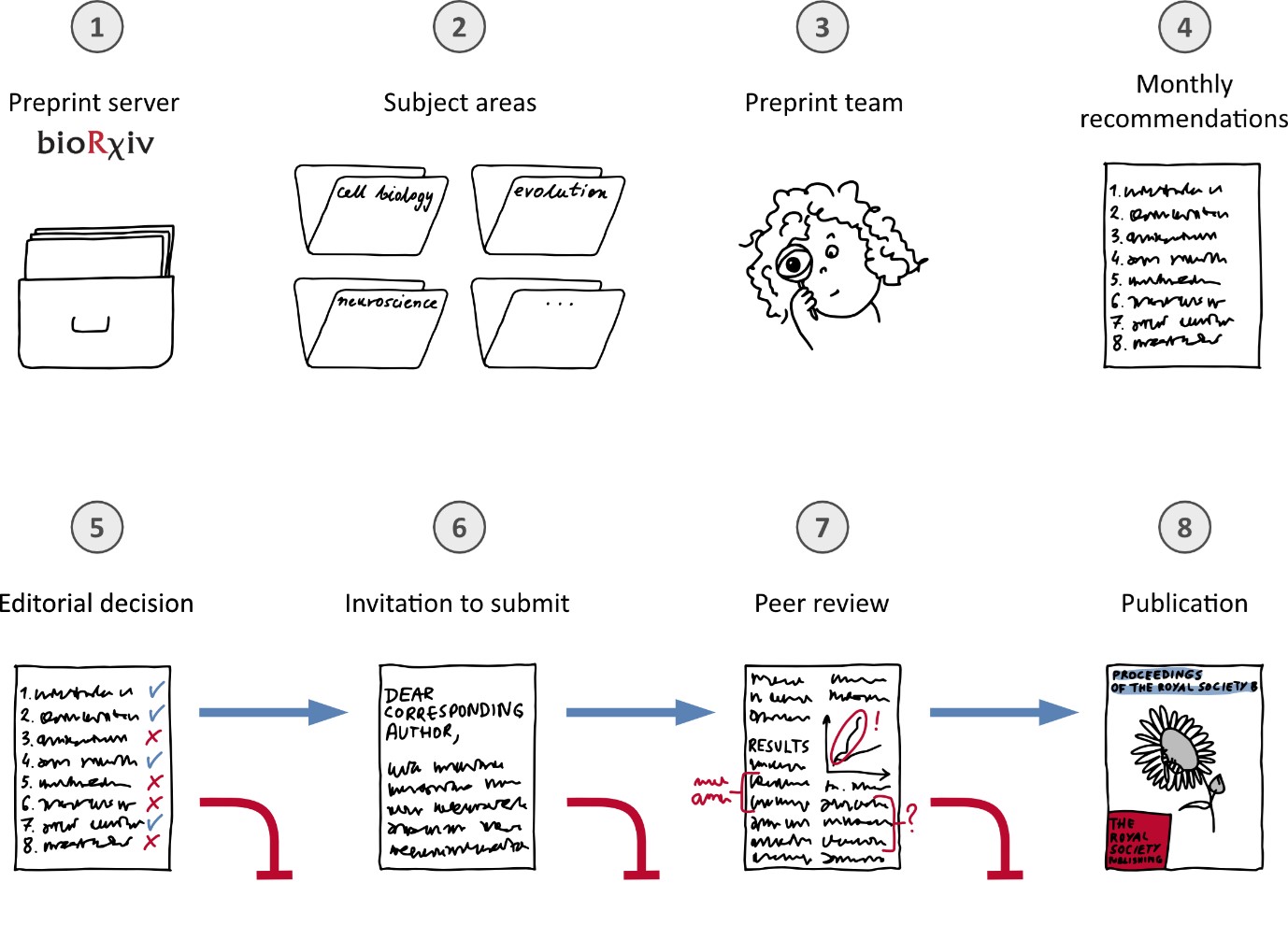 An overview of the preprint screening and solicitation process. Preprints deposited on the bioRxiv server (1) are scanned by subject area (2) by team members (3), who submit their monthly recommendations to a shared spreadsheet. The decision of whether or not to solicit these recommendations is taken by the Preprint Editor (5), and custom invitations are sent to corresponding authors (6). If the authors decide to submit their work to be considered for publication at Proceedings B, the manuscripts go through a regular peer-review process (7), before eventual publication in the journal (8).

Are we meeting our goals?

In this paper, the team summarise their efforts, using data and surveys to assess whether this initiative has been successful. The general feeling was that their efforts were well received: the team has received hundreds of positive responses, with many authors reporting that while their paper was already in review, they would either consider Proceedings B if their paper was rejected or submit to Proceedings B in the future. The feedback from authors as well as on social media suggests that the team was accomplishing their goal of raising awareness of Proceedings B amongst researchers who previously may not have considered the journal.

As of January 2021, 1469 personalised solicitation emails were sent to individual authors regarding 1239 papers, with 96 solicited papers submitted and 29 papers (approx. 30%) accepted for publication. A significantly higher proportion of solicited papers were accepted for publication as compared to papers submitted through the ‘traditional’ (non-solicited) route in 2017–2020 (approx.  21%). A comparison of submissions across 30 subject areas showed that there was not a significant difference in thematic representation of solicited papers versus papers submitted via the traditional route (2018–2020). However, the data suggest that solicited papers might represent a broader swath of biology. As an example, there were more submissions in subject categories like bioengineering and synthetic biology via the solicited route compared to the traditional route. A concrete result of the preprint solicitation effort was the introduction of the new biological science practices article type, which was inspired by the preprint team’s realisation that a subset of solicited papers focused on science studies that were perceived by the journal’s editorial board as being out of scope. By contrast, in terms of the geographical representation of submitting authors, there were no striking differences between the solicited and traditional route. The preprint team looks forward to repeating these analyses in a couple of years’ time with a larger data set.

An informal survey of 27 of the early-career scientists that are or have been involved with the preprint editorial team was conducted to determine whether they viewed their participation positively with respect to career development and knowledge in their field. Most agreed (15/27) that participation in the preprint group had improved their academic career, and overwhelmingly (24/27) indicated their work with the group aided their awareness of their research area. Several commented that it helped them to stay on top of new developments in their field or to identify papers relevant to their work. Several felt that engaging in regular review of preprints made them more aware of key aspects of the publishing process such as peer review, editorial handling and the scope or ‘fit’ of research journals.

Altogether, the paper shows that this initiative has largely been successful from the perspective of raising the journal’s profile and helping to build the careers of the early-career researchers involved in the team. Nevertheless, challenges remain, especially with respect to broadening representation of authors and preprint team members from across the globe.

The preprint team is always looking for new members - if you have an interest in joining the team, please contact Robin Bagley (bagley.72@osu.edu) for more details.

Image credits:
Maurine Neiman – University of Iowa.
Figure 1 - created by Dorota Paczesniak, from Development, Implementation, and Impact of a New Preprint Solicitation Process at Proceedings B