Jon Bushell looks at the Nobel Prize certificates in the archives of the Royal Society.

It’s perhaps not surprising that the Royal Society Fellowship is well represented among the Nobel laureates: more than 280 Fellows and Foreign Members have been recipients of Nobel prizes.

The award ceremonies for this year’s Nobel Prizes will take place soon, in early December.

The winners were announced back in October. Two of our current Fellowship were joint recipients of the Nobel Prize in Physics 2020 for their work on black holes: physicist and mathematician Roger Penrose FRS received one half of the award for his research into black hole formation and the general theory of relativity, documented in his 1965 paper ‘Gravitational collapse and space-time singularities’, while astrophysicist Reinhard Genzel ForMemRS shared the other half of the prize with Professor Andrea Ghez for discovering the supermassive black hole at the centre of the Milky Way.

The Nobel Prize in Chemistry 2020 was won by Jennifer Doudna ForMemRS, shared with Emmanuelle Charpentier. They were recognised for their development of the CRISPR gene editing technique, a new method of altering genomes which is much more straightforward and cost-effective than earlier methods. It opens up huge new avenues of research across many scientific disciplines, from plant breeding to treatments for diseases.

The Nobel Foundation was established according to the wishes of Swedish chemist Alfred Nobel, who made his fortune through numerous patents for explosives he invented, including dynamite. He never married, and his will allocated the bulk of his estate to establish the Nobel Prize. Since the first prizes were awarded in 1901, 603 awards have been presented to 962 Nobel laureates across the Foundation’s six award categories. 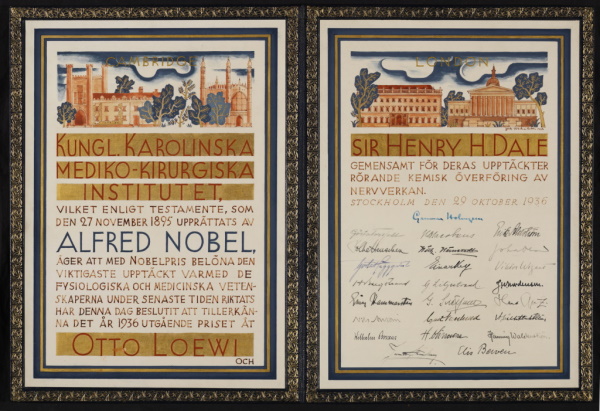 Considering there are awards for Chemistry, Physics, and Physiology or Medicine, it’s perhaps not surprising that the Royal Society Fellowship is well represented among the Nobel laureates: more than 280 Fellows and Foreign Members have been recipients of Nobel prizes. Around half had already been elected as Fellows of the Society by the time they received their award, and there are Fellows to be found among the winners of all six prizes.

A few Nobel Prize items belonging to past Fellows have even been donated to our archive collection over the years, including the certificates awarded to Henry Hallett Dale FRS and Otto Loewi ForMemRS. Dale (FRS 1914) was Director of the National Institute for Medical Research in London and went on to serve as President of the Royal Society from 1940 to 1945. Loewi, meanwhile, was appointed Professor of Pharmacology at the University of Graz in Austria in 1909, eventually becoming a Foreign Member of the Society in 1954. The pair had worked together in 1902 at the University College London laboratory of Ernest Starling FRS, and became lifelong friends, so it’s rather fitting that the pair shared the Nobel Prize in Physiology or Medicine 1936 for their ‘discoveries relating to chemical transmission of nerve impulses’. It must be quite rare to find both halves of the same Nobel Prize reunited like this in one institution. 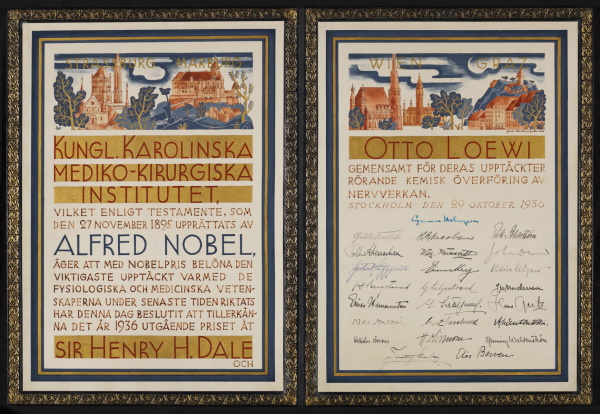 Both men carried out important research that developed our understanding of how the synapses in the nervous system work. In 1914, Dale identified a natural source of the chemical acetylcholine in ergot, and he proceeded to investigate the effect of the chemical on muscles and involuntary nerve actions. Loewi built on this work in 1921, noting that a chemical released by the body was stimulating the heart muscle and concluding that this was also acetylcholine. This was the discovery of the first known chemical neurotransmitter, and defined our modern understanding of the nervous system. Dale, Loewi and many other scientists continued to study neurotransmission in the 1920s and 30s, though it was Dale and Loewi’s groundbreaking work that led to their recognition by the Nobel Committee. 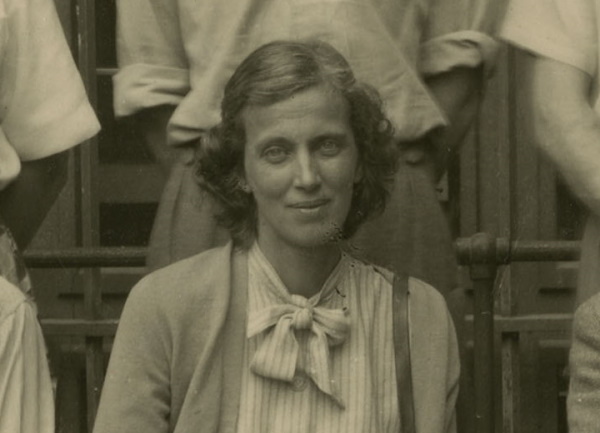 Leaping forward three decades, we also hold the Nobel certificate of Dorothy Hodgkin FRS, who was awarded the Nobel Prize in Chemistry 1964 ‘for her determinations by X-ray techniques of the structures of important biochemical substances’. Hodgkin was the third woman to win the Chemistry prize, and to this day remains the only British woman to have won a Nobel Prize in any of the science categories. Born in Cairo in 1914, she developed an interest in chemistry from a young age. She gained her first-class undergraduate degree from Somerville College, Oxford, and her PhD was supervised by J D Bernal FRS in Cambridge. Her career in X-ray crystallography led to the development of new techniques in the field, and the discovery of several important chemical structures.

In the 1940s Hodgkin produced the first ever molecular structure of a steroid and determined the complete structure of penicillin, following this by publishing her molecular model of the recently discovered vitamin B12 in 1955. However, arguably the most significant of her discoveries came after her Nobel Prize. Hodgkin began her study of insulin in the 1930s, but it was not possible to determine its structure with the techniques of the time. It was over three decades later, in 1969, that Hodgkin and her team in Oxford were finally able to document the complete insulin molecule. This paved the way for mass production of the hormone, providing diabetes patients with access to new treatments. 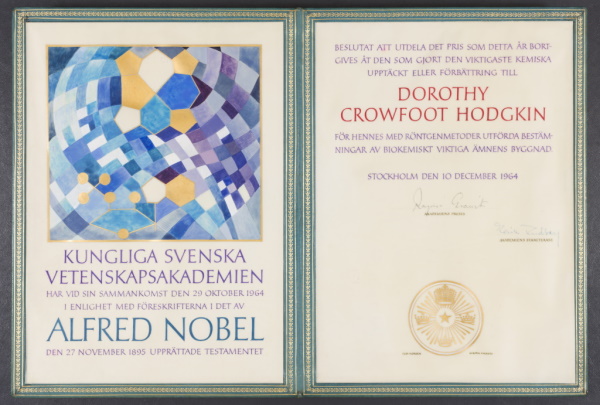 Of course, these discoveries were never the work of one single individual, and it’s important to remember that collaboration always plays a huge role in breakthroughs such as those celebrated by the Nobel Prizes. Our outgoing President of the Royal Society, Venki Ramakrishnan, is a Nobel laureate himself, and wrote critically on this issue at some length in his 2018 book, Gene machine. The Prizes do play an important role in highlighting brilliant science, however, as well as brilliant scientists. That’s something worth celebrating.