Ready, steady, go: how many hot dogs is it possible to eat in 10 minutes?

Professor James M Smoliga published a very popular paper in Biology Letters which investigated how many hot dogs it's possible to eat in 10 minutes. He told us about the background to his research, his experience of publishing in Biology Letters and the media coverage the paper received.

"I knew this paper had tremendous potential to be a popular story in the mainstream media, especially after the men’s and women’s records were once again broken just before the article was published. However, I was really shocked at just how much coverage it received – it really exceeded my expectations." 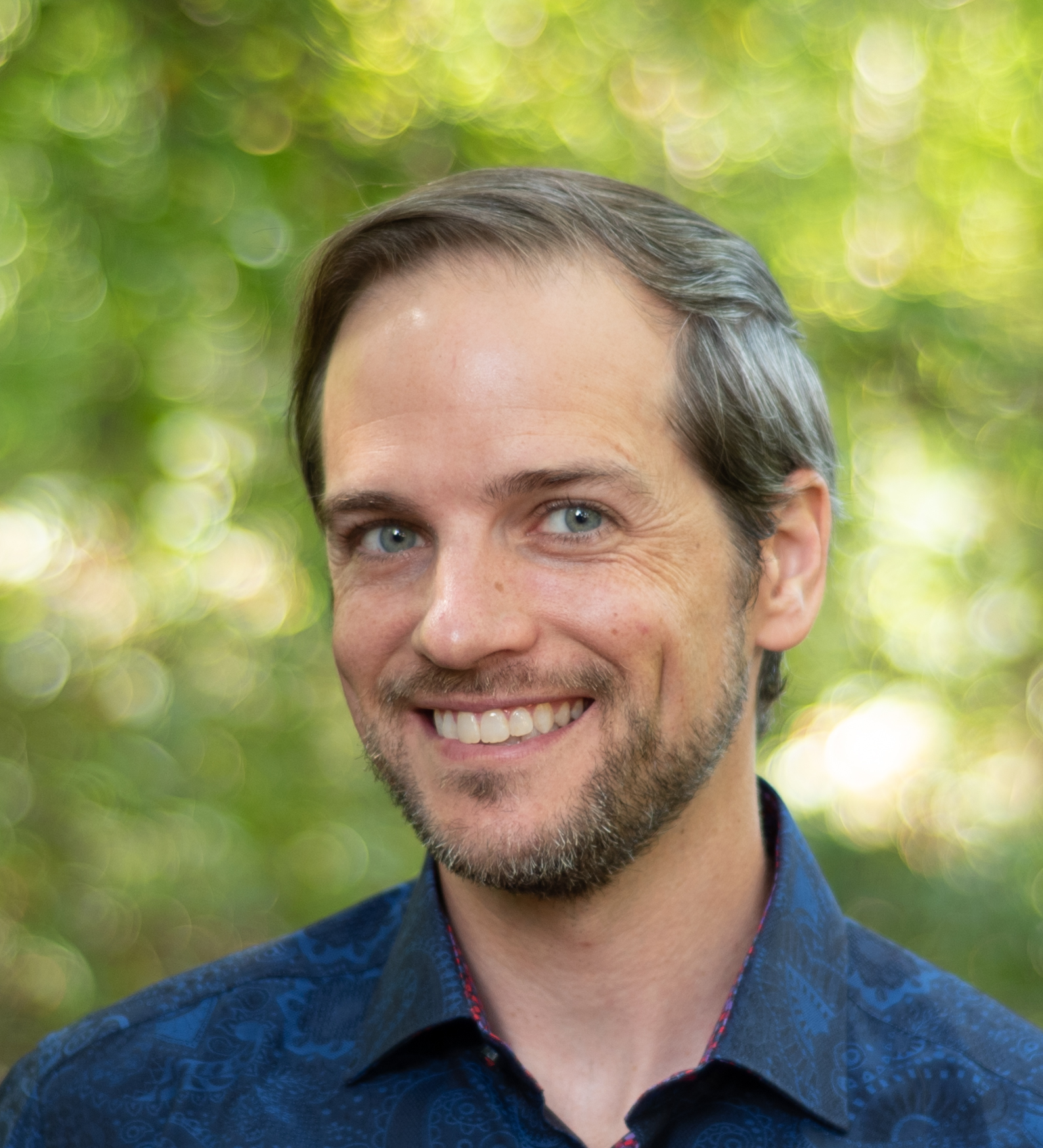 We’ve all heard of breaking marathon speed limits, but how about hot dog eating limits? Earlier this year Biology Letters published a paper which asked the question “how many hot dogs can a person eat in 10 minutes?” Borrowing mathematical modelling techniques which have been used to estimate the maximal limits of running performance, the study analysed historical data from a well-established eating competition.

The published article was very popular in the media, garnering a high level of attention and making headlines all over the world. We spoke with the author, Professor James M Smoliga from High Point University about his inspiration for this study, his experience of the peer review process and his reaction to the media attention.

What made you look into this particular area?

There were no triggering events – it wasn’t like I was eating a hot dog – the idea just popped into my head one day.

I have an eclectic mix of research interests, and sports science is one of my main areas of expertise. Leading up to the recent sub-2 hour marathon attempts, there was a lot of discussion in the scientific and running communities regarding the biological limits of human marathon performance. During this time, I was reviewing some of the literature on mathematical modelling of human performance, so all of the different models were at the forefront of my mind.

Completely unrelated to this, I had regularly watched the Nathan’s Famous Coney Island Hot Dog Eating Contest every year on the American Independence Day Holiday. I recalled that when I first started watching it, 20 hot dogs in 10 minutes were enough to win it, but then Takeru Kobayshi annihilated the competition by doubling the previous record. I am not sure what made me think of it, but one day it just dawned on me – “I’ll bet the hot dog eating competition follows the same sigmoidal model of performance improvement as seen in running events.” (Denny 2008 reported the sigmoidal model in question). Sure enough, it did – and I knew that I had to write this up into a paper.

Did you find out anything new or unexpected from your study?

The most unexpected finding from the study was just how impressive the competitive hot dog eating records are. Assuming that the early winners of the competition were “untrained” (which is actually documented through competitor interviews in the news stories that I used in acquiring the data for this paper) they represent what the high-end-of-an-average person can eat. That seems to be about 1 hot dog (with bun) per minute. In just short of 40 years of competition, we have seen individuals eat >7 hot dogs per minute – this is an impressive progression not seen in any other form of athletic competition! No world record in track and field, cycling, swimming, or skating has improved anywhere near this much in >100 years. As impressive as Eliud Kipchoge’s 2019 sub-2 hour marathon was (not an official world record), it represents less than a 50% improvement since the inception of world record keeping, and is only approximately twice as fast as the average marathon finisher. So, the biological differences between top competitive eaters compared with the average person is arguably more impressive than that of any top athlete compared to the average population. I did not expect to see that level of difference. When one hears perennial contest winner Joey Chestnut’s performance being superior to that of other professional sporting heroes, there is definitely truth to that from a biological perspective. 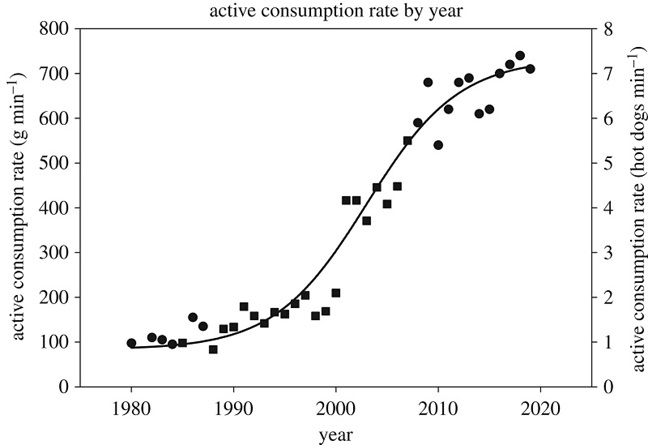 What made you decide to publish in Biology Letters?

I had previously published a fun paper in Biology Letters (questioning the supposed relationship between facial attractiveness and fitness) and found the editorial staff very helpful. Additionally, I knew that Biology Letters was particularly good at communicating scientific research to the press. On numerous occasions, I have heard of a news report covering a study examining an unexpected, yet interesting, biological research question which was published in Biology Letters. For instance, I was listening to National Public Radio one day and heard about a new study on yawn duration – sure enough, it was in Biology Letters.

I knew that my particular paper was very quirky – hopefully it would first make a person laugh, and then think. Clearly, not all papers in Biology Letters are like that, but some definitely are (where else could you find a paper asking the question, “how smooth is a dolphin?”). I thought my paper would be a perfect fit for this journal – real science but exploring an amusing and unexpected research question – so, it was the obvious first choice journal for me to submit to.

I also must note that the Biology Letters peer review process was excellent. Both reviewers had valuable feedback, but one in particular went above and beyond. He provided very positive feedback about the original content, but also provided me with valuable suggestions and posed some challenging questions – and he even chose not to remain anonymous. It was a lot of work to address all his requests, but it led to an improved manuscript. It is always very satisfying to see the peer review process work so well.

Your article made headlines all over the world. Were you expecting that level of interest for your study?

I knew this paper had tremendous potential to be a popular story in the mainstream media, especially after the men’s and women’s records were once again broken just before the article was published.  However, I was really shocked at just how much coverage it received – it really exceeded my expectations. I had spoken with the journalist who wrote the New York Times article before the paper was published online, so I knew that one was coming and was very excited about that level of coverage. But, I didn’t expect inquiries from the likes of Science Magazine, CNN, and the BBC! It was a crazy week trying to keep up with all of the media requests. I just tried to take it all in, recognizing that a paper about hot dog eating may just be the pinnacle of my academic career (at least, in the eyes of the public)!

I think the paper provided a nice bit of comic relief from the incredibly stressful and uncertain times of COVID-19. I hope that it generated enough interest that somebody will nominate me for an Ig Nobel Prize!

Does any news story particularly stick out for you?

One morning on Facebook, I got a message from one of my former classmates telling me they heard my name mentioned on the NPR weekly radio quiz show, “Wait, wait, don’t tell me.” I managed to catch the July 18 episode, and was delighted to hear that my research was used as part of their ever-entertaining trivia. I never even thought that this study would find its way into that type of entertainment – it made me smile!

While I enjoyed all of the media coverage, I found it interesting how the news cycle worked. While I did plenty of phone interviews, some sources simply cited other articles as their source of information and made some humorous errors in the process.

The competitive eating study was originally meant to be a “one off” type of study, but I was so blown away by the worldwide interest that my article received that I think it could be of interest to do a follow-up paper on the topic. The competitive eating community has a cult following, and there is a wealth of data available online which will be interesting to explore.

Additionally, I also hope that this research will be of interest to others and create further discussion on this topic. For instance, these competitive eaters have very unique physiology (which may be representative of dysfunction) – perhaps this may inspire others to study this population, and maybe this could help us learn more about the physiology / pathophysiology of eating disorders or gastrointestinal diseases. Indeed, I have already been contacted by one research group who was inspired to examine competitive eaters, and we are preliminary planning some research together.

I have a bunch of other completely unrelated projects that I am working on: I am involved in debunking pseudoscience in relation to products claiming to prevent concussions in athletes, and have started doing more database-driven sports concussion research. I am also finishing up a project examining the cardiovascular risks of participating in ultra-endurance sports, and working with a doctoral student on an exciting clinical study to examine the role of cardiorespiratory dysfunction in patients who have had a moderate-to-severe brain injury.

Since publication, this study has attracted attention from at least 65 news outlets* worldwide. These range from mainstream media publications to popular science magazines, and, in addition to the outlets mentioned above, also include the New York Post, Scientific American, The Guardian and Forbes.

Papers published in Biology Letters are routinely promoted across the media by the Royal Society Press Office, resulting in increased visibility and international impact for authors. Visit our website to read our latest research and find out how to send us your next paper.

Headline of the Scientific American article about this study.

1. Photo of a person holding a hot dog, taken by Peter Secan. Available from Unsplash (https://unsplash.com/photos/kKXBw9Exn30).
2. Graph depicting the active consumption rate (ACR) of the winner of the Nathan's Famous Hot Dog Eating Contest by year. From Figure 1 of Smoliga. Modelling the maximal active consumption rate and its plasticity in humans—perspectives from hot dog eating competitions. 2020. Biology Letters
3. Headline of the Scientific American article about this study.