Keith Moore finds some amusingly inaccurate representations of the Royal Society in newspapers from the nineteenth century.

Much as I’d love to see the Society’s Officers sporting some glitzy seasonal headgear, the Illustrated London News engraving from December 1843, with its error, is based upon one simple misunderstanding.

I’ve been cataloguing some nineteenth-century views of Royal Society events and it’s been fun to see how little errors creep into text and image. My favourite so far has been the unexpected appearance of three majestic-looking crowns, present at the Society’s meetings – no, really… 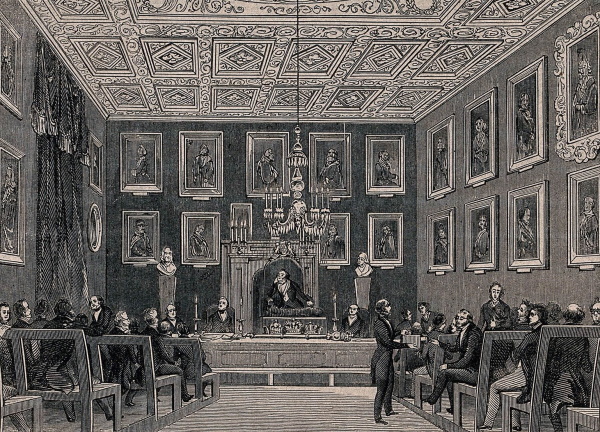 Crown-ink glory: the Royal Society as seen by the Illustrated London News (RS.4600)

Now much as I’d love to see the Society’s Officers sporting some glitzy seasonal headgear, the Illustrated London News engraving from December 1843, with its error, is based upon one simple misunderstanding. The scene appears to be a reasonable-enough gathering of Fellows taking place at Somerset House, probably the annual Anniversary Meeting, since balloting for new Fellows is in progress. The associated article describes the President in his chair, while ‘Beneath is a long table, whereon, at a meeting such as is represented in the engraving, are placed three crowns, and the society’s mace’. Our anonymous journalist concludes that ‘For a few of these details we are indebted to the courtesy of Mr. C. R. Weld, the newly-elected assistant-secretary.’

Charles Richard Weld (1813-1869) certainly can’t be held to account for the blunder, since he’d be very familiar with the Society’s formal regalia. The illustration was probably made by the wood engraver Frederick William Fairholt (1814-1866) trying to be faithful to the text: and how would he know that a casual observer had misinterpreted a George III inkstand, with its three silver-gilt inkwells, as something far grander? We still display this writing silverware at meetings, so the source of the confusion is obvious enough in hindsight. 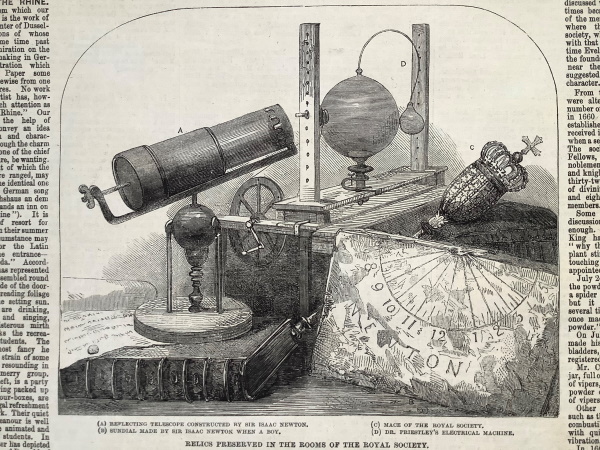 That’s not the only inaccuracy I’ve come across. A rather wonderful still life of the Society’s historical treasures appeared under the heading ‘Relics preserved’ in the Illustrated Times of 1860, with Newton’s telescope and sundial prominently featured. But upon closer inspection, the Priestley electrical machine shown bears no resemblance to the object in the Society’s collections, while the Charles II mace looks suspiciously generic. Indeed, the most important object in the print, the manuscript of Newton’s Principia mathematica upon which the Newtonian telescope rests, isn’t even mentioned in the accompanying article. It turns out that the artwork is a mash-up of earlier illustrations, the telescope and sundial taken from Charles Weld’s published History of the Royal Society (1848).

These minor mistakes show just how private an institution the Royal Society was, well beyond the first half of the nineteenth century. Only Fellows and their occasional guests would be present at meetings, and therefore a very limited pool of people would be familiar with the organisation’s routines and collections. Just a few years later, from the 1870s and 1880s onwards, Royal Society objects such as the mace and charter book would become fixtures at Burlington House exhibitions, or Conversazioni, the beginning of a process of opening up to a slightly wider audience. It wasn’t only print media that enabled such direct experiences, however. Photography, sound recordings and even live auditory events were being trialled at the Society. 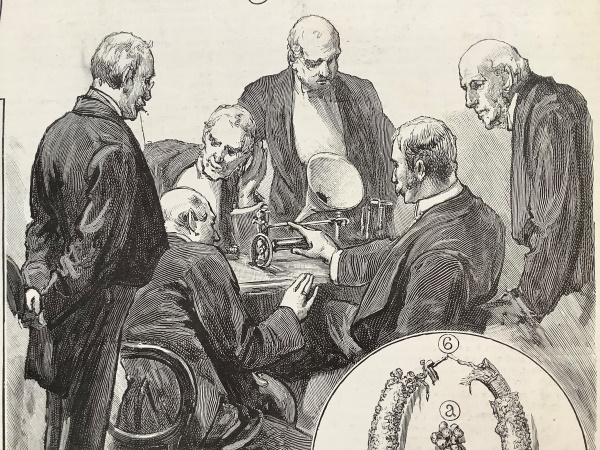 An illustration from 1889 shows some of this new technology: Fellows enjoying a performance of Mendelssohn, recorded using the Volta Laboratory’s graphophone wax cylinder device. Even earlier, in 1878, Edison’s patent phonograph was demonstrated at the Royal Society, just a year after its invention. Even more remarkably, by 1886 the United Telephone Company’s lines were being employed for live music: a performance of The Mikado, experienced directly from London’s Savoy Theatre in London, by a remote audience in Burlington House.

I suppose such experiences are very much in mind this year, after long periods of pandemic-induced Teams and Zoom meetings. Distance-busting communications technology is no longer a novelty, more of a necessity. It meant that at this year’s Anniversary Meeting, just passed, the Fellows were treated to a virtual image of the Royal Society mace for the first time, rather than the physical object. No mistakes this time, for the crowning event of the Royal Society’s year.