The poison of Empire

Frankie Chappell finds examples in the Royal Society's archives showing how scientific research into poisons supported colonial projects of exploration and expansion, and how the necessary role of indigenous peoples was obscured.

Royal Society Library staff are working to update cataloguing practices and authority files so that Fellows connected to colonialism, slavery and scientific racism can be more easily identified. 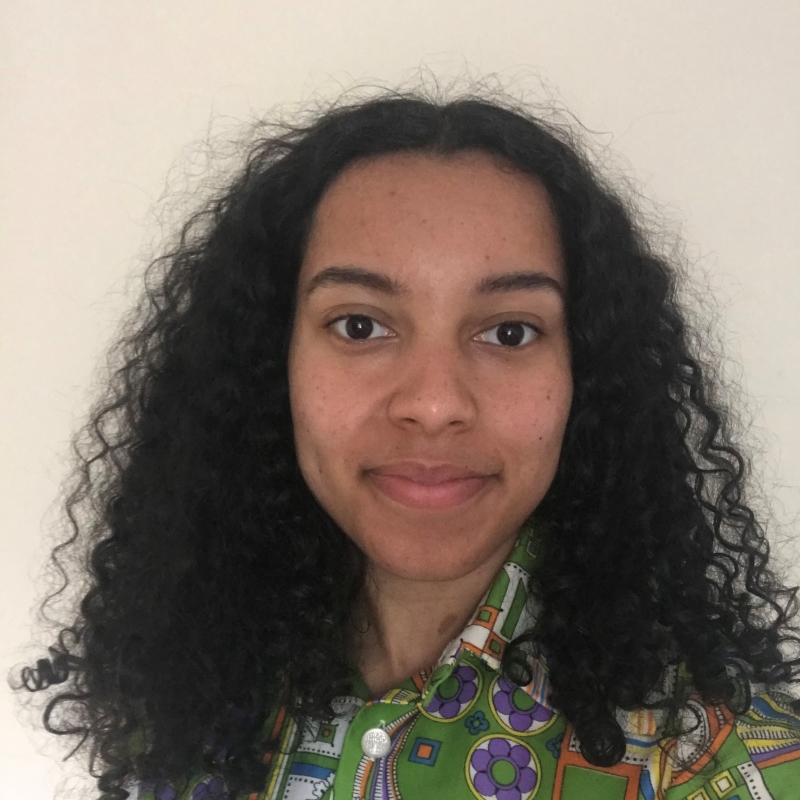 Following the killing of George Floyd in May, protests broke out across the world and the Black Lives Matter movement has since experienced a resurgence in the UK. Activists have drawn attention to Britain’s role in contemporary injustices, as well as its colonial past and centrality to the transatlantic slave trade and scientific racism. Cultural institutions and collections, educational organisations and learned societies have also been forced to take a much closer look at their practices and holdings to see where they can begin, or continue, to confront such problematic histories and present realities.

The Royal Society is not, and should not be, exempt from such attention and critique. In a 1993 journal article, Roy MacLeod writes that while the Royal Society began directly investing in expeditions in the early eighteenth century, almost from its beginning the Society asked for those travelling to Asia to provide ‘inquiries’ on what they found. Such ‘inquiries’ were also made into regions such as Africa, as shown by this document which asks about the temperature, the presence of disease, food, wildlife, medicines, poisons and other factors of ‘Barbary’ (North Africa). 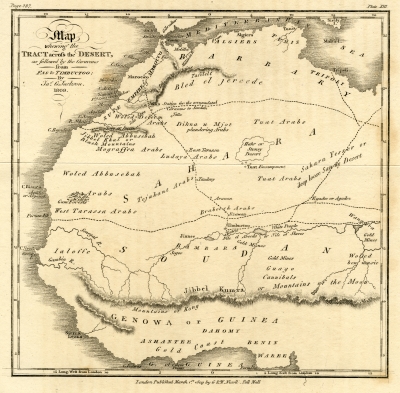 Map from An account of the empire of Marocco by James Jackson, 1809

This activity expanded, and by the beginning of the nineteenth century, MacLeod argues, scientific disciplines from astronomy to botany were put to use in the Empire’s economic aims. In a previous blogpost, we looked at the role of James Cook’s eighteenth-century journey to Tahiti in establishing British power in the South Pacific, and it’s clear that science driven by the Royal Society played an important part in British imperial history.

Staff in the Library and Archives have been working with colleagues to examine how this history can be more deeply and transparently explored. In the course of such research, I noticed a recurrent focus on poisons in papers and reports. Daniel Carey has argued that this was a potentially fatal risk for explorers, particularly if the poisons could be used by indigenous peoples to resist the presence or domination of Europeans. Carey confirms that the Royal Society had a particular interest in conducting experiments on samples of poisons from correspondents based in Southeast Asia.

In the context of the Indonesian city of Makassar in the seventeenth century, information on the feared poison known as Ipo gave the English an advantage against the Dutch who were the dominant power in the ‘East Indies’ at that time. Makassar was important from a trade perspective ‘and the poison represented an unusual resource in local opposition to Dutch insurgence, something of potentially great use.’ Beyond an interest in the natural world, it was important for the workings of colonialism that knowledge be gathered about such substances. 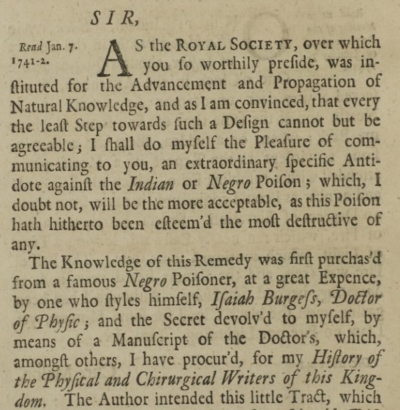 Extract from a letter from Edward Milward to Martin Folkes, 1742

The ways in which information about and samples of such poisons were obtained tells us something about the necessities of scientific activity away from home. For example, in an eighteenth-century letter from Edward Milward to Martin Folkes, President of the Royal Society, Milward reports new information on an antidote to ‘the Indian or Negro Poison’ in the West Indies, which was ‘purchas’d from a famous Negro Poisoner, at a great Expence’. Over a century later, Thomas Lauder Brunton FRS and Walter Pye wrote of the acquisition of the Casca bark, which one Mr Monteiro had obtained ‘with great difficulty from a native at Bembe during his residence in Angola.’

Extract from Thomas Lauder Brunton and Walter Pye's letter on the Casca bark, 1877

In both of these examples, the poisonous plant itself and the knowledge surrounding it was not directly accessible to the imperial power, and could only be gained through interaction with indigenous or enslaved peoples. But as the examples above show, these interactions cannot be assumed to have been equal or congenial (‘great difficulty’ could refer to coercion or worse), and the knowledge gained could be used in the service of the colonial project, and so ultimately reinforce the oppression of those same people. 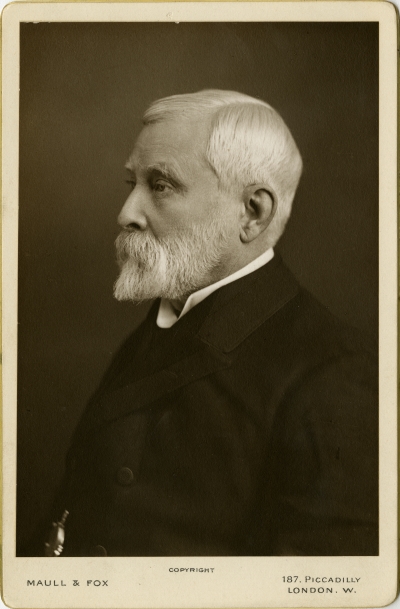 Scientific interest in poisons, then, highlights not only how science served in large part to support the colonial project of exploration and expansion, but also the necessary role of indigenous peoples for providing scientific knowledge. Both of these issues are often obscured through the way records and objects are described.

As anyone who has used an archive will know, the detail included in a catalogue can be crucial to finding research material. Royal Society Library staff are updating cataloguing practices and authority files so that Fellows connected to colonialism, slavery and scientific racism can be more easily identified. Our Black History Month blogposts in October looked at the involvement of colonised peoples in the making of science, and a PhD project on the relationship between the Royal Society and eugenics is also planned.

However, there is much more work to be done, and identifying underacknowledged or erased individuals in the history of science can be difficult. At each step in the process of history the involvement of Black, indigenous and other people of colour has frequently been erased. While the work we are doing involves excavating the contributions of colonised peoples to modern science, there are wider questions to be asked of the history of science. A July 2020 lecture by Professor James Delbourgo explored how a ‘new global history of science’ could be conceptualised through the idea of the ‘knowing world … in which Western and non-Western theories interact, inform each other’. Resources for thinking more widely about this and other issues can be found on this reading list.