‘Should civilised man ever reach these distant islands we may be sure that he will disturb the nicely-balanced relations of organic and inorganic nature as to cause the disappearance, and finally the extinction, of these very beings whose wonderful structure and beauty he alone is fitted to appreciate and enjoy.'

You’ll find an abundance of press stories about the world’s largest mammals, land and marine, but one in particular caught my eye just before Christmas. The reports were based upon a scientific paper, its authors having investigated the contents of a sixteenth-century Portuguese ship, the Bom Jesus, apparently the oldest-known European wreck off the coast of Africa. The cargo contained elephant ivory and the results of the analysis were pretty shocking.

The ivory trade from Africa was intricately linked to the slave trade from the Early Modern period, part of the widespread exploitation of African resources and people by overseas powers. As a material, ivory was valued because it was relatively light and easily carved – the plastic of its day. It might be found in products as varied as jewellery, chessmen, works of art or scientific instruments. The Bom Jesus tusks, destined for European markets, were found whole and in conditions sufficiently preservative that residual genetic material might be captured. Of the seventeen distinct ‘families’ of forest elephants represented in the cargo, only four still remain in modern elephant populations.

Such applications of scientific methods to archaeological and archival materials are fascinating as a means of looking at historical populations in zoology and quantifying the loss of Earth’s biodiversity over time. Similar analyses have been made on the remains of other species: whalebones, for example, to examine the past geographical spread of different types of cetaceans and the impact of commercial whaling. The Royal Society is interested in issues of biodiversity as a major policy strand and you can find summaries of the latest work on our website.

Within our archive and book collections you’ll find plenty of evidence for humankind’s somewhat inconsistent attitudes towards wildlife. There are, for example, many drawings and prints of animals that suggest they were to be wondered at and admired, even as they were being killed for the purpose of the illustration. Expeditionary scientists would routinely slaughter creatures as specimens for later investigation, and their accounts can be tough going to modern eyes. 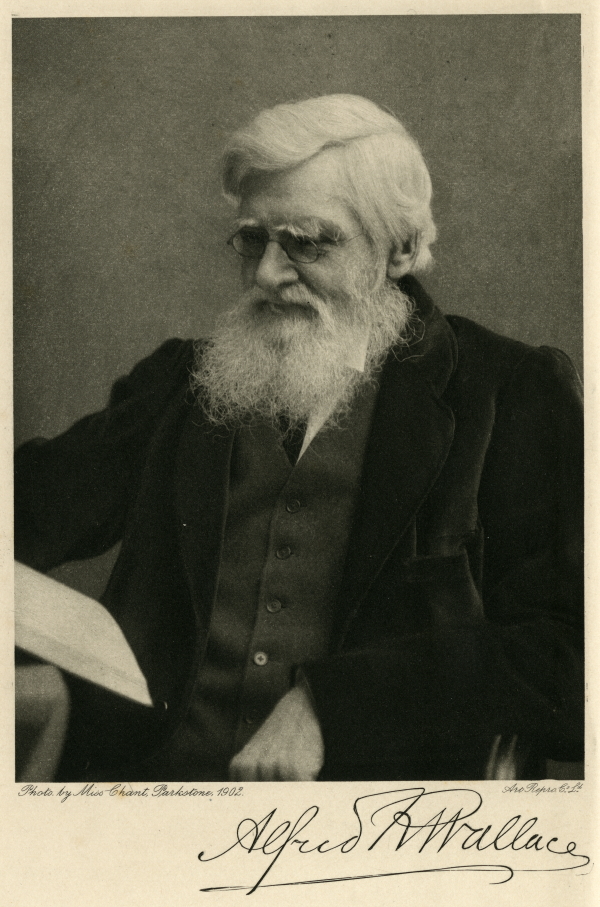 Recently, I was reading Alfred Russel Wallace’s Malay Archipelago (1869), a classic Victorian text, in which he details the rich biodiversity of that region. Wallace’s solo expedition (1854-1862) resulted in the collection and return of many thousands of biological specimens to England, mostly insects and plants, and of genuine scientific importance. But his account of shooting orangutans is a difficult passage, especially as one realises that Wallace was collecting commercially too – that was how he funded his scientific work. He was sufficiently self-aware to understand the potential impact of outsiders on such habitats. In discussing how local forester-collectors helped him to find and kill the islands’ astonishing Birds of Paradise, he wrote:

‘[S]hould civilised man ever reach these distant islands [the Aru Islands Regency] we may be sure that he will disturb the nicely-balanced relations of organic and inorganic nature as to cause the disappearance, and finally the extinction, of these very beings whose wonderful structure and beauty he alone is fitted to appreciate and enjoy. This consideration must surely tell us that all living things were not made for man.’ 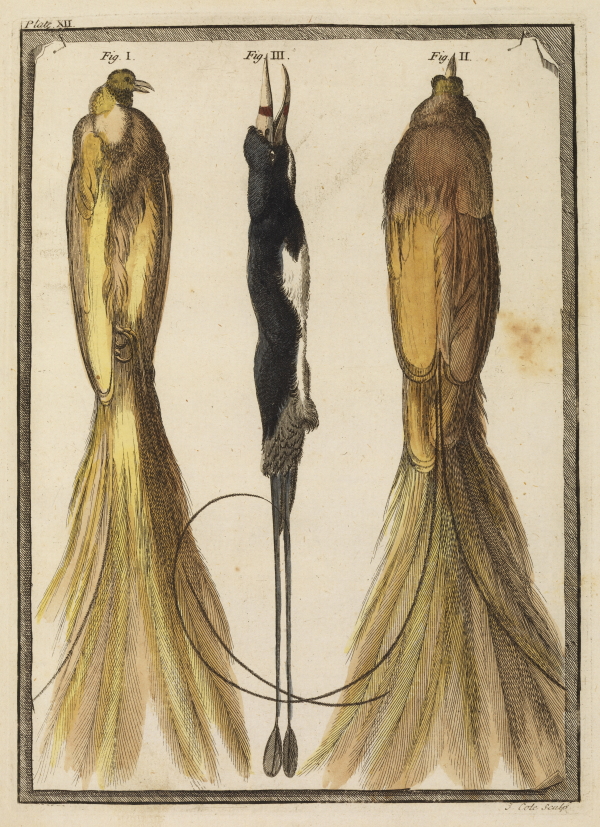 But back to those elephants. Our picture holdings show many of these magnificent animals, often displayed as curiosities. They range from Andre Thevet’s fantastical battle between elephant and rhinoceros from 1582, to Patrick Blair’s anatomical description of an elephant that had died at Dundee in 1706: 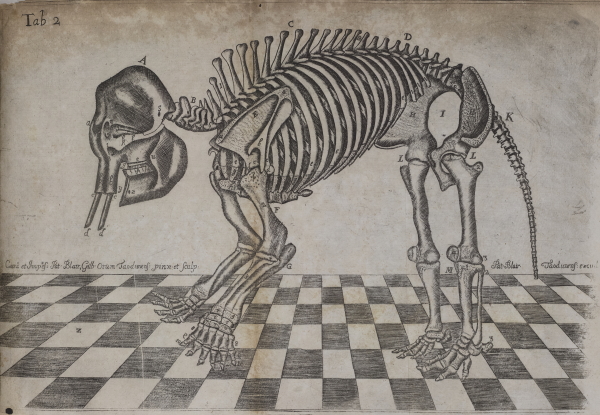 My favourite is the etching below, from a work by the Italian physician Francesco Serao (1702-1783) of what is likely to be an Indian elephant, a regal gift to Charles of Bourbon (1716-1788), later King of Spain. If you look closely, you might be able to see the volcano Vesuvius in the background – the animal was kept in the grounds of the Portici Palace near Naples. It’s a poignant image of a traded animal, far from home. 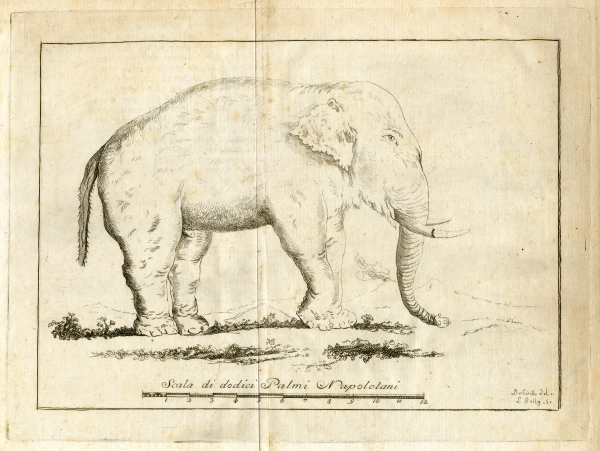