The Mars Perseverance rover is the latest in a long line of attempts to map and understand the Red Planet. Rupert Baker finds some earlier examples in the archives of the Royal Society.

‘The snow patch on the south pole … was remarkably distinct so much so as to give me the impression of it having a cliff boundary the termination was so sudden.’

I don’t know about you, but I found the ‘WindowSwap’ link in our previous blogpost curiously addictive. I suppose we’re all dreaming of different horizons at the moment – and not necessarily terrestrial ones, if you’re a science fiction fan like me. On three recent occasions, my locked-down reading and viewing has taken me all the way to the planet Mars.

I can highly recommend The Space Machine, Christopher Priest’s homage to the work of his long-time hero H.G. Wells (not-quite-FRS), and I prepared for this by rereading – for the first time in more years than I care to remember – The War of the Worlds. Then on television, I’ve been gripped by the Martian storylines in season five of The Expanse, or ‘Blake’s 7 with a budget’ as I tend to think of it, in another reference which probably dates me. And you won’t be surprised to hear that the Red Planet pops up many times across the centuries in our Royal Society collections, so I thought I’d share a few of the images and links I’ve found.

The drawings below were made in March 1666 by Robert Hooke, Curator of Experiments at the Royal Society, and entered in our Register Book in the paper ‘Some Observations … Concerning the disposition of the Air and Spots discovered in the Planet Mars’. Subsequently published in the Philosophical Transactions, the article shows Hooke lamenting the ‘ill disposition of the Air’ in London (‘twas ever thus) and attempting to determine, from the changing position of spots on the surface, the rotation period of Mars – now known to be just longer than the Earth’s, at 24 hours and 37 minutes. 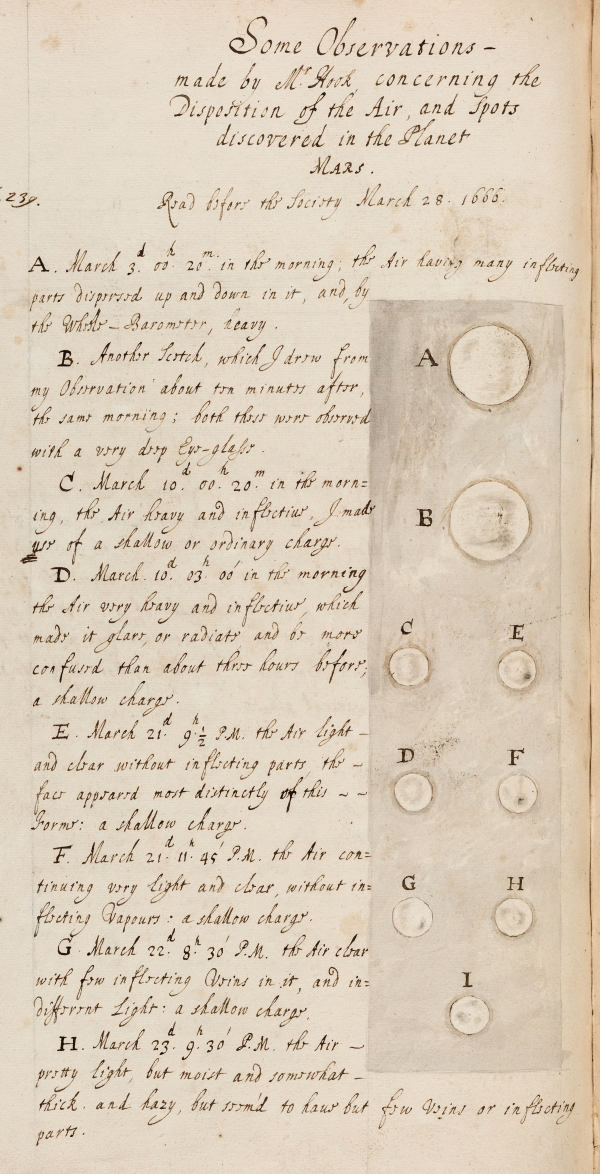 Jumping forward to the nineteenth century, there’s a fine example of Mars as the Roman God of War in this March 1846 page from the Illustrated London Almanack. It’s part of our manuscript number MS/910, proof sheets for the Almanack which originally belonged to editor James Glaisher FRS. We’ve met Glaisher before in our blog, in this 2016 post on his intrepid ballooning exploits, subsequently immortalised in a well-received, if not entirely historically accurate, film. 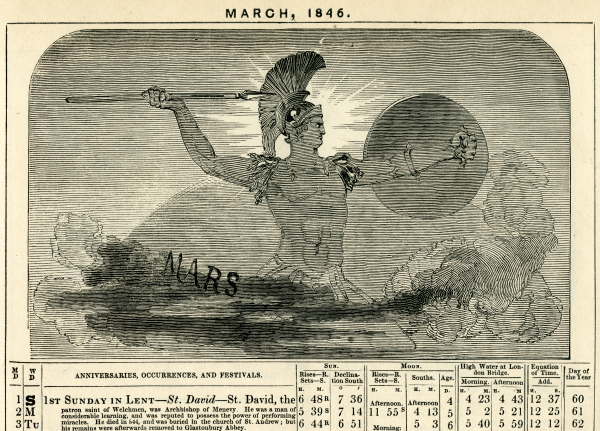 John Phillips FRS, better known as a geologist but not averse to looking through a telescope every now and then, published his paper ‘On the telescopic appearance of the planet Mars’ in the 1863 volume of our Proceedings. Phillips notes that he was ‘aided … by large drawings made with reflectors by Mr. De la Rue and Mr Nasmyth’, and although James Nasmyth (whose images of the lunar surface featured in this blogpost) was not a Fellow, we’ve retained his illustrated letter to Phillips in our archives (AP/45/10). Nasmyth’s watercolour painting of Mars, reproduced below, clearly shows the south pole of the planet – inverted in his telescopic view – which led him to comment that ‘the snow patch on the south pole … was remarkably distinct so much so as to give me the impression of it having a cliff boundary the termination was so sudden.’

The shape of the polar cap isn’t quite as regular as that, as a modern image shows, but at least Phillips and Nasmyth weren’t convincing themselves that they could see canals on Mars. I’ll use a very long bargepole on the ‘Martian canal theory’, which was popular at the time, even making it onto the pages of a Royal Society journal in 1906 courtesy of leading enthusiast Percival Lowell, but disproved completely by the first planetary flyby missions in the 1960s.

Talking of missions to Mars, I’ve been at the Royal Society long enough to remember the excitement of the 2003 Summer Science Exhibition, where Colin Pillinger and his team proudly displayed a model of the Beagle 2 Mars lander, and certain colleagues of mine became far too excited by close proximity to members of Blur (pictures here, if you must). You’ll probably remember that the mission itself was sadly a case of ‘so close, and yet so far’ – this press release gives the eventual resolution of the mystery – but many useful lessons were learned, and it was a joy to re-watch this conversation with the inspirational Professor Pillinger.

While preparing this piece I was also very pleased to hear from my colleague in our Picture Library that there’s a Martian landscape, with Beagle 2, now hanging on the walls at the Royal Society’s home in Carlton House Terrace. Reproduced below by kind permission of artist David A. Hardy, the picture was part of Professor Pillinger’s personal collection and is on loan to the Society from his widow, Judith. 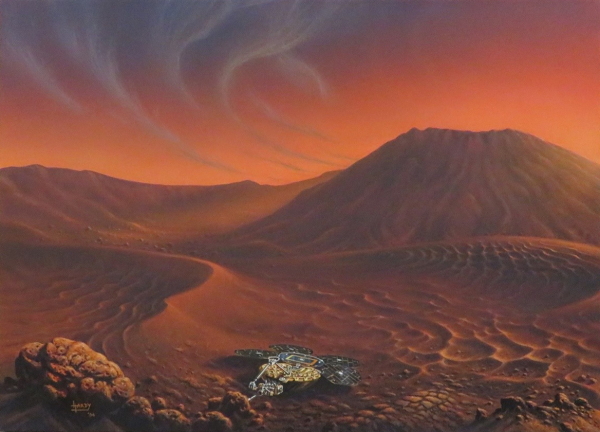 Mars, of course, continues to attract attention. A satellite from the United Arab Emirates has recently sent back its first, rather stunning, wide-orbit image of the planet, and the NASA Perseverance rover has touched down safely on the Martian surface to begin its hunt for signs of ancient microbial life. Or will the rover itself be observed by ‘intellects vast and cool and unsympathetic’, in H.G. Wells’s famous phrase? Scientists will rightly pour cold water on the idea, but my science fictional side is still a little nervous…