'It was agreed that a lunch should be arranged for the artist, his subject, Sir John Cornforth and the Officers early next year when the President would formally accept the sketch on behalf of the Society.’

I was planning a trip to the Henry Moore Studios and Gardens in Perry Green, Hertfordshire, when I came across the current installation This Living Hand: Edmund de Waal presents Henry Moore.

The exhibition invites you to explore Moore’s work through touch, allowing you to run your hands across the surface of three different sculptures. Curated by contemporary artist Edmund de Waal, the pieces have been chosen for their association with the hand, re-affirming the tactile experience. 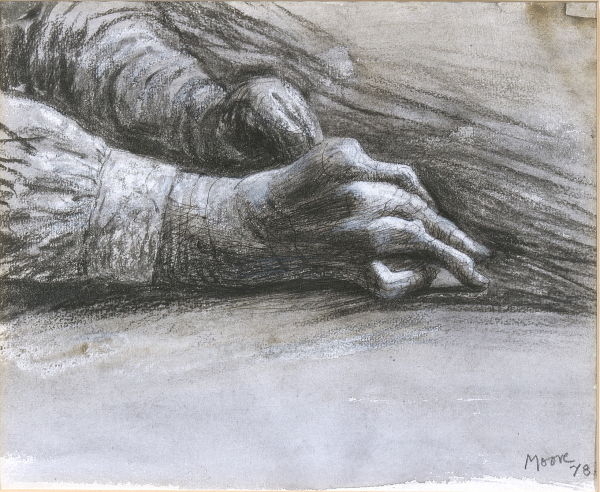 I’ve long admired the Henry Moore charcoal and chalk sketch shown above, part of the collection of the Royal Society. I was therefore intrigued to note that De Waal has included further illustrations of the same subject in a display of artworks alongside the main exhibit. He chose them for the ‘huge powerful beauty’ of the hands of Dorothy Hodgkin FRS, who was affected by rheumatoid arthritis from her late twenties. Moore had a special interest in hands and how they can convey feelings through their expressive nature. 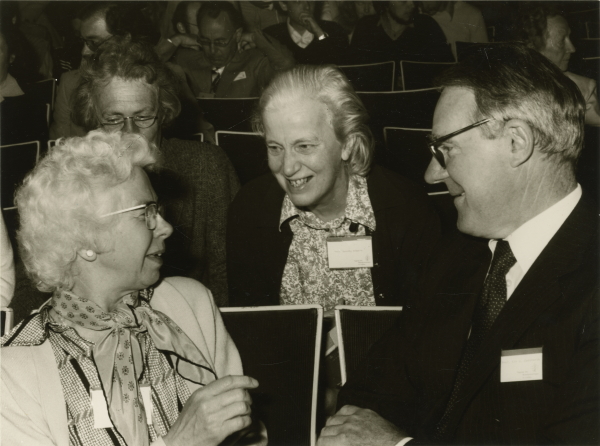 I was intrigued to learn more about the Moore drawings, and other representations of Dorothy Hodgkin in our collections. I discovered that, among the papers of Sir John Cornforth FRS, donated to the Society in 2014, is the correspondence in relation to the administration of the Dorothy Hodgkin portrait fund (COR/1/6/1). Acting as secretary to this fund, Cornforth later decided that ‘the story seems worth telling’ and an account was published in 1982 in Notes and Records of the Royal Society.

It transpires that the bid to have a portrait of Hodgkin painted in the late 1970s was intended to address the fact that the Society had no representations of women Fellows within the portrait collection. Despite this omission, the Council could not finance the project: the commissioning of Presidential portraits was a relatively recent tradition beginning in the 1940s and it did not extend to paintings of Fellows. The collection up until that point had been largely amassed from generous donations. The Society did support a voluntary effort and a circular went out to all Fellows and Foreign Members as well as firms and institutions, receiving great support.

Cornforth, Sir Rex Richards FRS and Sir David Phillips FRS were then invited by the Society to select the artist. The first appointed was Graham Sutherland (1903-1980), known to Hodgkin as they were both members of the Order of Merit. Sadly, Sutherland died before completing the portrait, but he did prepare two preparatory watercolour sketches, his final works, one of which was given to the Society and the other to Hodgkin herself.

Richards’s Biographical Memoir (2021) details his interest in the arts and his association with Henry Moore. Richards had met Moore through Lincoln College’s exhibition and lecture programme in the 1950s. Familiar with Moore’s work on hands, he suggested that the artist depict Hodgkin’s. According to Cornforth’s account this appears to be in addition to the main portrait by Sutherland, although some sources indicate that Moore was approached to paint a full portrait and declined, offering only to capture her hands. Moore completed a series of 10 drawings in July 1978 and donated one of these to the Society the same year, as recorded in our Officer’s Minutes, November 1978:

‘The Biological Secretary reported that Henry Moore’s sketch of Professor Dorothy Hodgkin’s hands would be donated to the Society. It was agreed that a lunch should be arranged for the artist, his subject, Sir John Cornforth and the Officers early next year when the President would formally accept the sketch on behalf of the Society.’

Meanwhile, following Sutherland’s death in 1980, Bryan Organ was chosen to complete the final portrait. Captured in profile, Hodgkin is seated with her arm resting on the back of the chair, elevating her left hand to the forefront of the portrait: 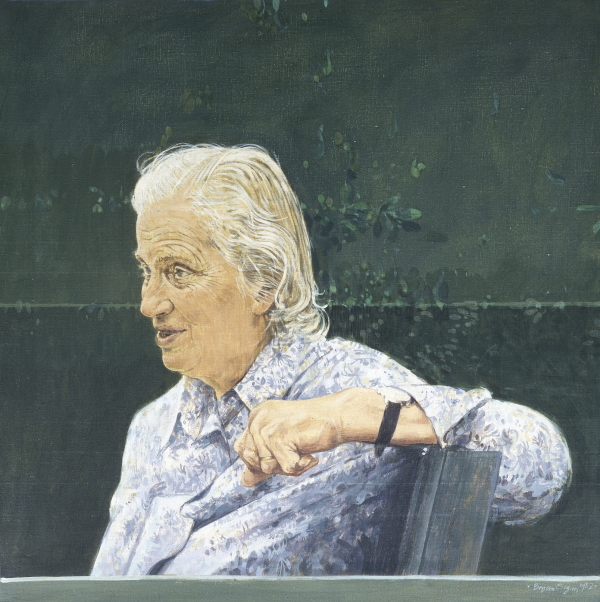 Henry Moore is best known for his large bronze public sculptures, yet he produced thousands of drawings over the course of his career and is considered to be an important draughtsman. If, like me, you are keen to see more, you can view the full set of the Dorothy Hodgkin sketches on the Henry Moore Foundation’s artwork catalogue – or maybe I’ll see you in Perry Green!