Louisiane Ferlier introduces our new digital version of the first Journal Book of the Royal Society, featuring research on the speed of sound, melons, diving suits and spiders.

‘A Circle was made with pouder of Unicornes horne, & a Spyder sett in the middle of it: but immediately it ran out...'

Every 30 November, on Saint Andrew’s Day, we celebrate the anniversary of the Royal Society. Medals are awarded, Fellows are lauded, the President reflects on the past year, and science takes the spotlight.

To celebrate this year (happy 361st!), I’m delighted to share with you JBO/1, the very first Journal Book of Royal Society meeting minutes, on our Turning the Pages platform. Paradoxically, as you navigate through the date index, you’ll immediately notice that on 30 November 1660 nothing happened at the Royal Society. 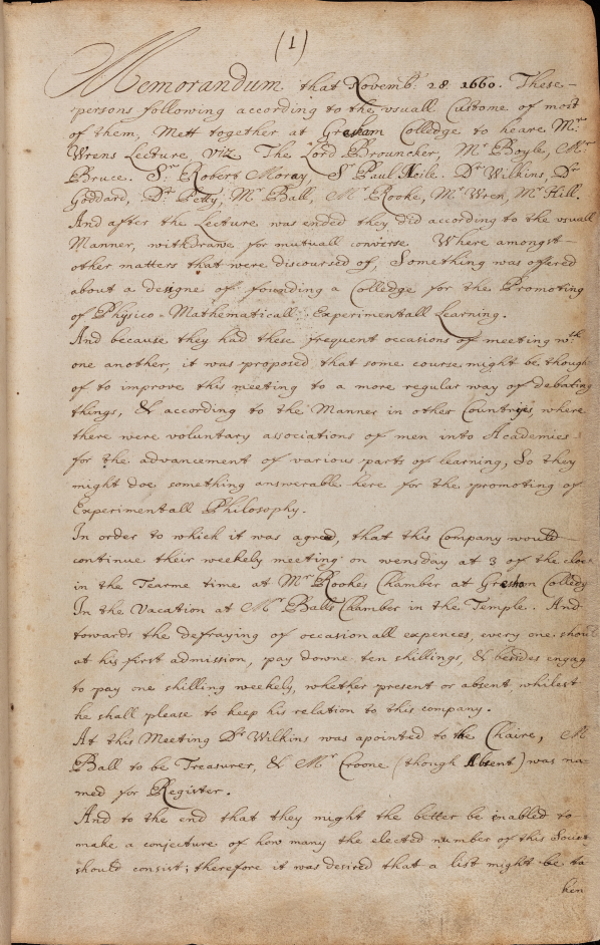 Minutes of the first meeting of the Royal Society, 28 November 1660

In fact, the first meeting of the group of twelve we now regard as our ‘Founder Fellows’ took place on 28 November 1660. This was followed a week later by a gathering of a much larger number on 5 December, complete with 'signing-in sheet', a detail from which is shown in the main picture at the top of this post. The decision to choose a Council and President on St Andrew’s Day was taken two years later as part of the statutes which accompanied the first Royal Charter.

The Journal Book is a treasure trove of information like this on the early days of the Royal Society, as it contains the minutes of all the ordinary meetings which took place between 1660 and 1663. For instance, before becoming the Royal Society of London for Improving Natural Knowledge, the Founder Fellows had come up with a less-than-catchy first name: the ‘Colledge for the Promoting of Physico-Mathematicall, Experimentall Learning’. 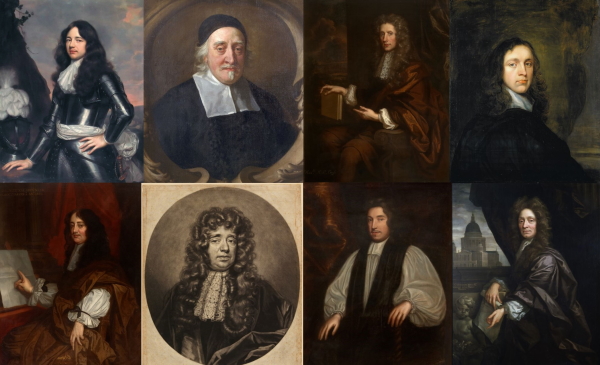 Of the group of twelve who met at Gresham College after Sir Christopher Wren’s lecture – William Ball, Robert Boyle, William Brouncker, Alexander Bruce, Jonathan Goddard, Abraham Hill, Robert Moray, Paul Neile, William Petty, Lawrence Rooke, John Wilkins and Wren himself – it’s interesting to note that roughly half were Royalists and half Parliamentarians, in a period when England was just emerging from a civil war. I also found it particularly revealing that they explicitly described the institution as modelled after previous continental academies, and intended to implement ‘a more regular way of debating things, & according to the Manner in other Countries, where there were voluntary associations of men into Academies for the advancement of various parts of learning’. Through the pages, we can see the institution maturing, establishing rules and organising itself.

Most remarkably, the Fellows were not only promoting ‘Physico-Mathematicall, Experimentall Learning’ but also debating and practising it. What makes the Journal Book so fascinating is the litany of more or less successful experiments, inventions and observations we find through the pages. Between trying out a diving suit in the Thames (24 July 1661), calculating the speed of sound (10 September 1662) and growing melons (17 June 1663), the Fellows managed to perform some crucial experiments with Torricellian barometers, and still had time to perfect a method of preserving wine and to decide on when oysters are best eaten (both on 19 November 1662, thereby demonstrating empirically that wine and oysters pair well at the end of a busy meeting). 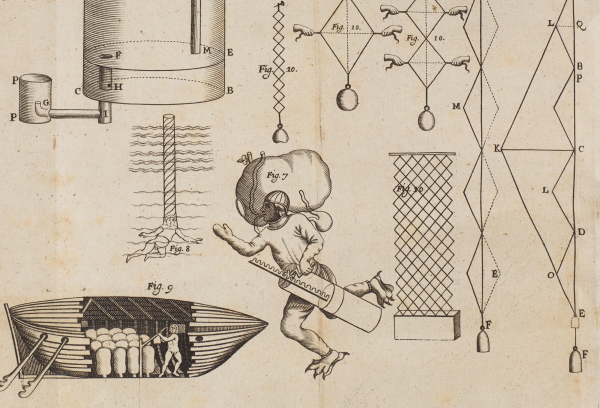 If science in all its breadth is documented throughout the pages of the Journal Book, it is unsurprising that some experiments may well shock modern audiences, either as absurd or as downright unethical. For the absurd, take for instance another entry on 24 July 1661, when ‘A Circle was made with pouder of Unicornes horne, & a Spyder sett in the middle of it: but immediately it ran out, severall times repeated the Spyder once made some stay upon the pouder’. The mind boggles as to what the powder was and what they were trying to demonstrate.

In terms of ethics, repeated experiments on people and animals seem cruel and quite unnecessary by our standards, especially as we now know the effects that various methods such as trans-species blood transfusions or pressurisation have on living creatures. But if readers ought to be warned of these details, they remain essential if we are to see how science evolved. As our former President reminded us at last year’s Anniversary Day, ‘at the frontiers of science, there is always uncertainty’. These were the frontiers of science in 1660.

The Journal Books have long served as a primary source for historians of science, and they’re a key tool for our team whenever we try to trace the provenance of manuscripts, books, instruments or artwork, or establish when a certain decision was taken. There’s an earlier draft form of the minutes in MS/557/1/1 which I would certainly like to digitise in the near future. There’s also a Journal Book Copy, which exemplifies how Fellows already knew the motto, beloved of today’s digital preservation specialists, that Lots of Copies Keep Stuff Safe (LOCKSS). But JBO/1 is quite unique in that it contains not one but two tables of contents, allowing us to find the different experiments, scientific topics and Fellows mentioned in the volume.

I think the Journal Book is one of the best offerings we could make on this Anniversary Day. With the addition of the transcription on Turning the Pages we hope that – although the archaic spelling will still be difficult for some – our digital version will become an invaluable tool to many.

Finally, don’t you think meetings ought to close like this more often:

‘The Amanuensis was ordered to make thin small bubbles for the next day's meeting’ (16 April 1662).