The Biology Letters team checked in with the authors of a recent paper to find out more about their study and their research.

"We chose Biology Letters because of its attractive format of short papers and high-quality content. Everything went smoothly during the process, with an excellent reviewing and editorial process."

Lecturer in Animal Behaviour and Entomology

Lecturer in Animal Behaviour and Entomology

Tell us about yourselves and your research

I am originally from Brazil but was based at the Lab of Socioecology & Social Evolution at KU Leuven, Belgium for the better part of my career. My main scientific interests are to understand how conflicts and cooperation shaped advanced insect societies, for which I study ants, bees, and wasps as model systems.

Most people are familiar with honeybees and bumblebees but are unaware of the existence of the stingless bees which are quite a diverse group of social bees with about 400 species distributed mostly through the tropics. They are a remarkable diverse group of animals with many intriguing characteristics (apart from the fact that they do not sting!) such as the one we studied in our recent paper in Biology Letters.

What is your article about?

Usually, bee colonies are headed by a single queen, so new queens are only produced during the reproductive season or if the mother queen happens to die. Hence, only a small fraction of bees become queens. However, in a group of stingless bees of the genus Melipona, at any given moment we can observe that up to 20% of all individuals emerging as adults are in fact queens, which end up mostly being killed by workers in their own nest. This is an example of the “tragedy of the commons” in biological systems in which individual and collective interests collide. In our study we tested whether this phenomenon was indeed an example of the tragedy of the commons, or a way to export gene copies to the population if these excess queens would manage to take over unrelated nests nearby. 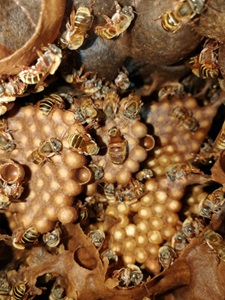 What are the main points readers should take from the article?

Our paper suggests that queen parasitism is not widespread in the group, and it should be taken more as a consequence of the queen overproduction than the cause of it. We also give support to the original “tragedy of the commons” hypothesis whereby individual larvae bias their developmental pathway according to their best evolutionary interests.

Did anything surprise you while conducting your study?

These are remarkable animals, and this particular species has one of the highest known proportions of queen overproduction. I was confident that we would find high rates of queen parasitism when we designed the experiments. To my surprise, we found no evidence of it, which turned out to be a very interesting discovery. 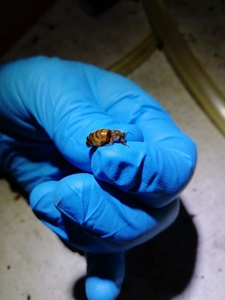 Why did you submit to Biology Letters and how was your experience publishing with Royal Society Publishing?

We chose Biology Letters because of its attractive format of short papers and high-quality content. Everything went smoothly during the process, with an excellent reviewing and editorial process.

What’s next for you?

I am now starting my own lab at the Universitat Autònoma de Barcelona where I will continue studying the many facets of conflict and cooperation in these fascinating animal societies.

Do you have a short, high-quality article, review or opinion piece from the biological sciences that you’d like to publish in Biology Letters? For details on how to submit please visit our website or contact the editorial office.

Figure 2. Inside of a Melipona beecheii hive showing the brood combs with several workers and the mother queen in the centre. Photo credit to Ricardo Caliari Oliveira.