The Guest Editors of the latest Philosophical Transactions B issue introduce us to the content and background to this fascinating topic.

"The support from the team at Phil Trans B made the whole project efficient and allowed us to focus on content. We just learned a lot. We highly recommend guest editing for Phil Trans B, especially for early-career researchers."

Against the backdrop of exceedingly destructive wars raging throughout the Middle East and Europe, understanding the origins, dynamics and consequences of human conflict not only gains relevance but also urgency. A new theme issue of Philosophical Transactions B on ‘Intergroup conflict across taxa’ contributes to such understanding by bringing together insights from biology, anthropology, and economics on intergroup conflict. Indeed, although uniquely destructive and violent, warfare and intergroup conflict is not confined to the human species, and is also seen in a range of species, including social insects and birds, and various group-living mammals. Combined, contributions to this theme issue present novel insights into the conflicts that emerge when individuals group together to aggress and compete against other groups for territory, food, mating opportunities, power and influence. They reveal why intergroup conflict emerges, how it evolves, and what consequences it has for individuals and their groups, overarching societies included.

Guest Editors Professor Carsten De Dreu (Leiden University, and University of Amsterdam) and Dr Zegni Triki (Stockholm University) tell us how this issue came about, and what can be learnt from studying conflict in different species.

Each of us has been studying cooperation and conflict for quite some time. But while Zegni was studying social fish, Carsten was concerned mostly with humans. The obvious differences between these two species notwithstanding, we observed super-interesting parallels in our findings, especially in the neurobiological underpinnings of competition between groups of conspecifics. It made us curious about intergroup conflict in other species and quickly we realized that not only a systematic side-by-side examination of intergroup conflict in various species was missing, but also that such comparison could teach us about the very basic origins, dynamics and consequences of intergroup conflict that might be difficult to derive from studying specific species in isolation.

Tough question. Each paper stands on its own and really advances our understanding of intergroup conflict in a broad range of social species in concrete and targeted ways. Collectively, the contributions rely on a wide range of methods, from neuroscience methods and hormonal assaying to laboratory experiments, ethnography and field observations, and archival analyses and computational modelling. It is pretty daunting to consider this breadth, yet in combination, the contributions really paint a comprehensive picture of intergroup conflict, and move the field forward in various ways. In our introduction to the theme issue, we highlight three innovations that we see emerging across several papers – how across species leadership emerges in the context of intergroup conflict, and with what consequences; how social diversity within groups both results from and can fuel intergroup conflict; and how climate change can give rise to more frequent and intense conflicts among neighbouring groups of conspecifics.

Carsten:  Although I had been reading into the literature on animal behaviour, editing the submissions to the theme issue forced me to really get into the details. I learned about new methods and their pros and cons, but also a lot about the interconnections between the proximate mechanisms of intergroup conflict, which always had been my main focus, and the more distal fitness consequences of intergroup conflict as modelled in work on other species.

Zegni: This editing experience helped me acquire a great deal of knowledge on the specifics of various social vertebrate species beyond my usual study model organisms. It makes you aware that despite every species being unique, you still find similarities in behaviour, such as engaging in and settling an intergroup conflict. It also helped me get away from my comfort zone as an empiricist and finally face my fears with theoretical models, where I learned from both the authors and reviewers about the particularities of the various models presented in the contributions.

It was intense, very nice and rewarding. We worked closely on editing the submissions and were very lucky with many responsive and constructive reviewers. It was a great experience to see the contributions develop and to increasingly identify interconnections among the distinctive papers. The support from the team at Phil Trans B made the whole project efficient and allowed us to focus on content. We just learned a lot. As an early-career researcher, in particular, this was a great opportunity and milestone for Zegni to expand further her network beyond her field of research and reach a broad and relevant international readership. We highly recommend guest editing for Phil Trans B, especially for early-career researchers.

Carsten: I am interested in how humans work together and solve their conflicts. I direct a small team in which we use neuroimaging, computational modelling, and behavioural experiments to better understand how groups make joint decisions that are sometimes super-creative and sometimes utterly bad, and when and how individuals create and escalate conflict with (individuals in) other groups.

Zegni: I am a behavioural ecologist/physiologist interested in how brain features and resulting cognitive abilities allow animals to respond to their ecological challenges with adaptive behaviour. My research focuses on fishes and other ectotherm vertebrates, where I often run experimental manipulations (e.g., environmental and/or social conditions) on individuals within the same species to study their adjustments with respect to the brain structure, cognitive abilities and resulting behaviour. 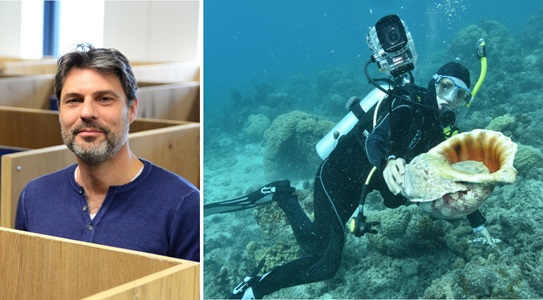 To read more content from Philosophical Transactions B, or to find out how you can become a Guest Editor for the journal, please visit our website.