Ellen Embleton tells the story behind a spectacular painting in the Royal Society's home in Carlton House Terrace.

Various well-dressed figures loiter by the entrance, and activities are illuminated against the sodium-yellow lit windows, setting the scene for a late-night spectacle of science.

We’re fresh from Summer Science Exhibition season here at the Royal Society. As discussed in this Google Arts & Culture story, our annual showcase of cutting-edge science has its roots in the late eighteenth century, when soirées were first introduced to the Society.

Like the Summer Science Exhibition, soirées were an opportunity for people to gather and witness the latest developments in science and technology through interactive displays. One of the key differences between the two is that soirées were traditionally formal evening events, as seen in many of the contemporary engraved depictions of them.

For this post, I've chosen to look at another image from our collections, which I have often thought might be a depiction of a soirée: London at Night. 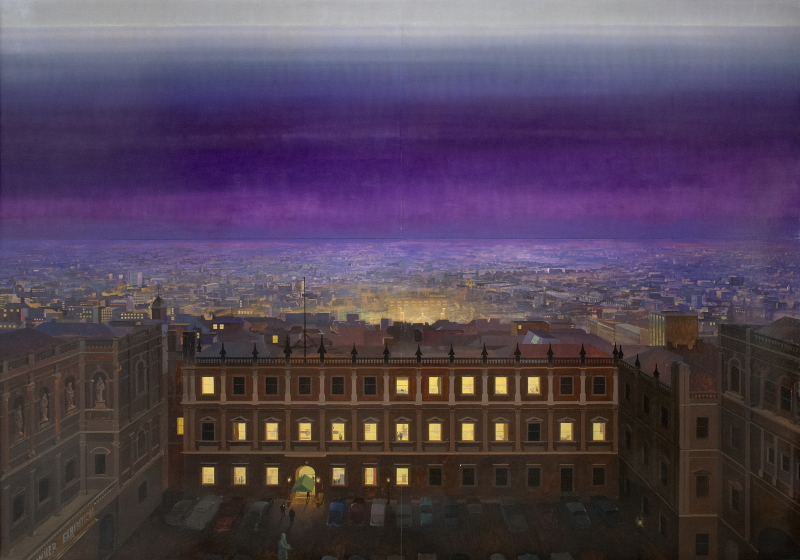 This artwork shows a night view of the quadrangle of Burlington House, looking towards the East Wing. This was the home of the Royal Society from the wing’s completion in 1873 to 1967, when the Society moved to its present location in Carlton House Terrace. Automobiles are parked in the approaches, various well-dressed figures loiter by the entrance, and activities are illuminated against the sodium-yellow lit windows, setting the scene for a late-night spectacle of science. Beyond, a false perspective of high-rise buildings and the River Thames can be seen.

London at Night will be familiar to anyone who has visited us at Carlton House Terrace: its position on the staircase between the ground and first floors makes it hard to miss. It’s the work of Lawrence Daws, an Australian landscape painter and printmaker who spent some time in London in the late 1950s and 1960s.

I’ve never been 100% sure of the accession details for this artwork. I knew it had been commissioned specifically for the space, so decided to hunt through some administrative records from the 1960s, when the Royal Society was renovating Carlton House Terrace prior to moving in. I began with the minutes of the Building Committee, the Society’s Committee appointed to oversee these works, and quickly found that the architect overseeing the renovation, Sir William Holford (1907-1975), was the donor:

Excerpt from minutes of a meeting of the Building Committee, July 1966, CMB/339a

The above proposal came at a meeting of the Committee in July 1966. In November the following year the Committee, upon consulting some sketches presented by Daws – which, sadly, I’ve been unable to track down – thanked their architects for this generous gift. This is not new information, the donor has long been listed in our Picture Library entry as ‘William Holford and Partners’, but I was glad to find written evidence in the collections confirming it.

The Building Committee minutes didn’t provide any insight as to why Holford proposed Daws as the artist for this commission, but something in our Florey Papers caught my eye as a possible clue. Sir Howard Florey (1898-1968) was President of the Society in the first half of the 1960s, and was heavily involved in the renovation of Carlton House Terrace. In a letter Florey drafted in 1964 to the Australian Prime Minister, in an (ultimately unsuccessful) attempt to drum up some additional funds for the renovation work, Florey writes that ‘We have Sir William Holford, who as you know is, amongst other things, intimately concerned with Canberra, as our architect’.

As far as I knew, Holford was best remembered for his work in British town planning, so this reference was surprising. It transpires that in the mid-1950s Holford was asked by the Australian Government to travel to Australia and report on the development of Canberra, as part of a broader scheme to bolster the capital, after its progress had stalled during the Great Depression and World War II. Some research in the digital catalogues of the National Library of Australia, specifically amidst the papers of a colleague of Holford’s, Gareth Roberts (1928-2009), revealed that Daws had supplied an ‘Aerial perspective drawing of Canberra’ to the redevelopment project team. This provides more of a link between Daws, Holford and the Royal Society, the relationship of which, prior to now, had always puzzled me.

The fact that both works are aerial views of an urban landscape seems to make it more likely that Holford commissioned Daws for London at Night having seen and approved of his work in Canberra. Furthermore, Holford might have suspected that this Australian artist would go down especially well with the Society's Australia-born President, Florey.

I'm certainly glad of Daws's presence in our collection. The lovely purple hues of London at Night never fail to impress visitors on our tours of the building, and it really is something to behold when observed in situ, framed by three grand arches, a fitting nod to the Society’s former home.