Colours of the seasons

Early book historian Professor Richard Gameson explains how he and his colleagues in ‘Team Pigment’ have analysed the pigments used in one of the Royal Society's oldest manuscripts.

The entries in medieval calendars were generally colour coded: in the finest volumes, the most important feast days were written in gold, the next most important in blue and/or red, the rest in ordinary brown/black ink. 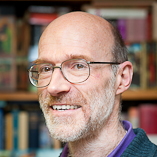 Professor Richard Gameson, Durham University, specialises in the history of the book from Antiquity to the Renaissance, and in medieval art. As part of a team with Professor Andy Beeby of the Department of Chemistry, Durham, and Dr Catherine Nicholson of Northumbria University, he investigates by non-destructive scientific means the nature and use of medieval illuminators' pigments.

But just how old is it really? We asked Professor Richard Gameson, an early book historian working with ‘Team Pigment’ from Durham and Northumbria Universities, to explain his team's research into the pigments found in the manuscript. Here's what Richard told us:

'Recent work with non-invasive, non-destructive techniques (fibre-optic reflectance spectroscopy, Raman spectroscopy, multi- and hyper-spectral imaging, and x-ray fluorescence spectroscopy) has at last provided a reliable picture of the pigments that were in general use among those making manuscripts in medieval England, not least during the late fourteenth and the early fifteenth century. This is the period to which the almanac, Royal Society MS/45, has been assigned on textual grounds: it includes as an original entry the feast of St Anne that was promulgated in 1383.

The colorants that were almost universal at this time were vermilion red, azurite blue, carbon black, lead white, and leaf gold. Common though slightly less ubiquitous were minium (red lead, with and without massicot) for both reds and oranges, verdigris and vergaut greens (the former copper-based, the latter confected by mixing yellows and blues of various sorts), lapis lazuli blues, indigo blues and blacks, organic purples (from orcein or folium), and ochre browns.

A colour whose fortunes changed dramatically from the fourteenth to the fifteenth century was yellow. Following a rise in the use of gold leaf in the twelfth century, yellow had declined in popularity: the available materials were either too muted in hue (ochres) to be juxtaposed effectively with gold, or were fugitive (organics that were prone to fading), or (in the case of the mineral orpiment) were toxic and liable to degrade certain other colorants.  Around 1400 this all changed with the arrival of lead-tin yellow (Type I), a manufactured pigment that was bright and stable and offered good covering power: accordingly, it could 'hold its own' alongside gold. First witnessed in an English book at the very end of the fourteenth century (as the yellow component of a mixture green), it began to be deployed as a yellow in its own right from the beginning of the fifteenth century, appearing almost simultaneously in work from 'provincial' centres such as Norwich and York as well as in London. 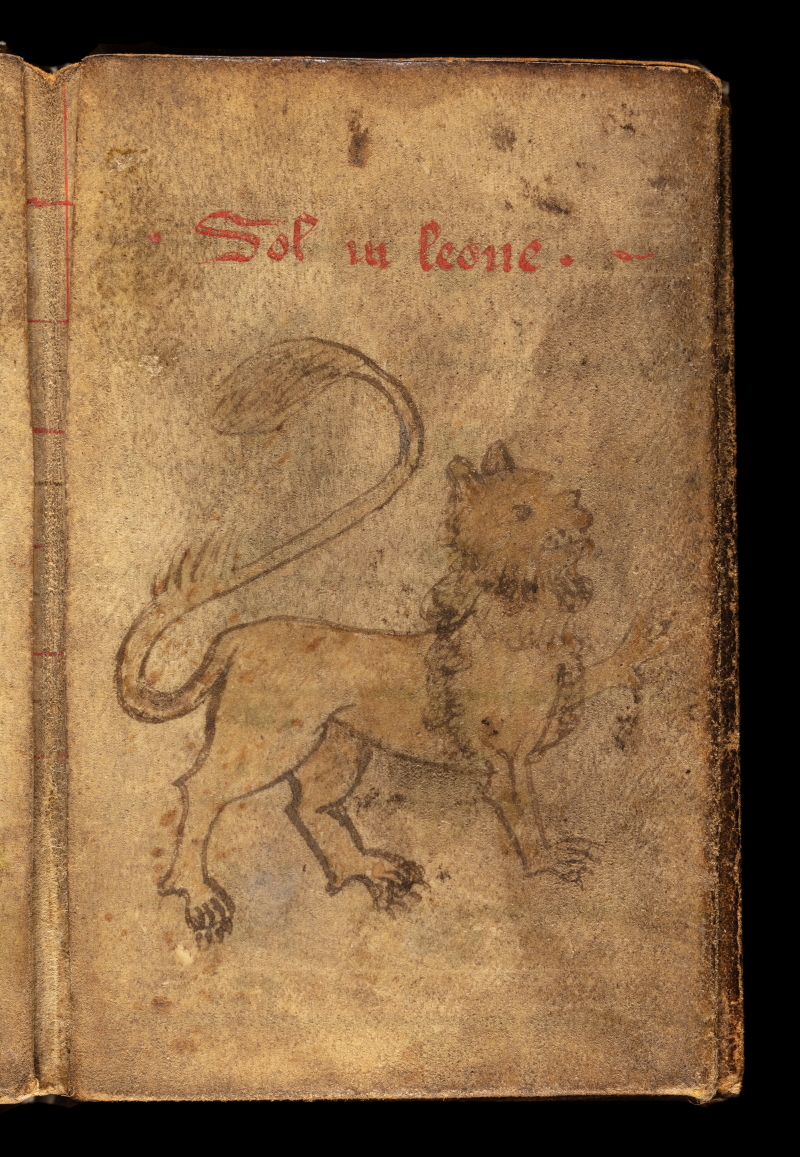 Orpiment yellow lion from MS/45, representing the sign of the zodiac Leo.

The pigments used in MS/45 were vermilion, orpiment, verdigris and indigo, along with gallo-tannic, organic, and mixture (indigo plus vermilion) browns. This restricted range is consonant with the 'workaday' nature of the item. The absence of lapis lazuli and azurite, the most expensive pigments, might reasonably be ascribed to economy. That said, the palette cannot be described as 'impoverished' given that its red is vermilion (widely available but the next most expensive colorant after the mineral blues) rather than minium, organic or ochre reds, all of which were cheaper.

The same applies to the yellow – orpiment, as opposed to the more economical ochre and organic alternatives. A further point of interest here is that it was not lead-tin yellow either – something that, in view of the chronology outlined above, favours a date of production in the later fourteenth century or c. 1400 rather than in the early fifteenth century.

The employment of gallo-tannic and other browns but no carbon black is consonant with the rudimentary character of the artwork in suggesting that this was done by the scribe of the text rather than by a separate decorator. For scribes of this period invariably used gallo-tannic inks, while illuminators favoured carbon blacks.

A final point of interest arises from the deployment for blue of indigo (probably derived from locally-available woad rather than from imported indigo proper). The entries in medieval calendars were generally colour coded: in the finest volumes, the most important feast days were written in gold, the next most important in blue and/or red, the rest in ordinary brown/black ink - an order that reflected the real-world cost of these colorants. The calendar entries in MS/45 lack gold but otherwise follow the same system, with the most important feast days (those for the Virgin Mary) written in blue, the next most important ones done in red, the next again in green, while the remainder are written in brown-black ink.

As an example, the picture below shows the feast days for 1-16 August. The Assumption of Mary is inscribed in blue, the Chains of St Peter and the Finding of the Relics of St Stephen are in red, Lawrence the martyr is in green, and King Oswald in brown. Each feast also features a sideways portrait-head of its saint plus an emblem (e.g. a key for Peter, a grid-iron for Lawrence): 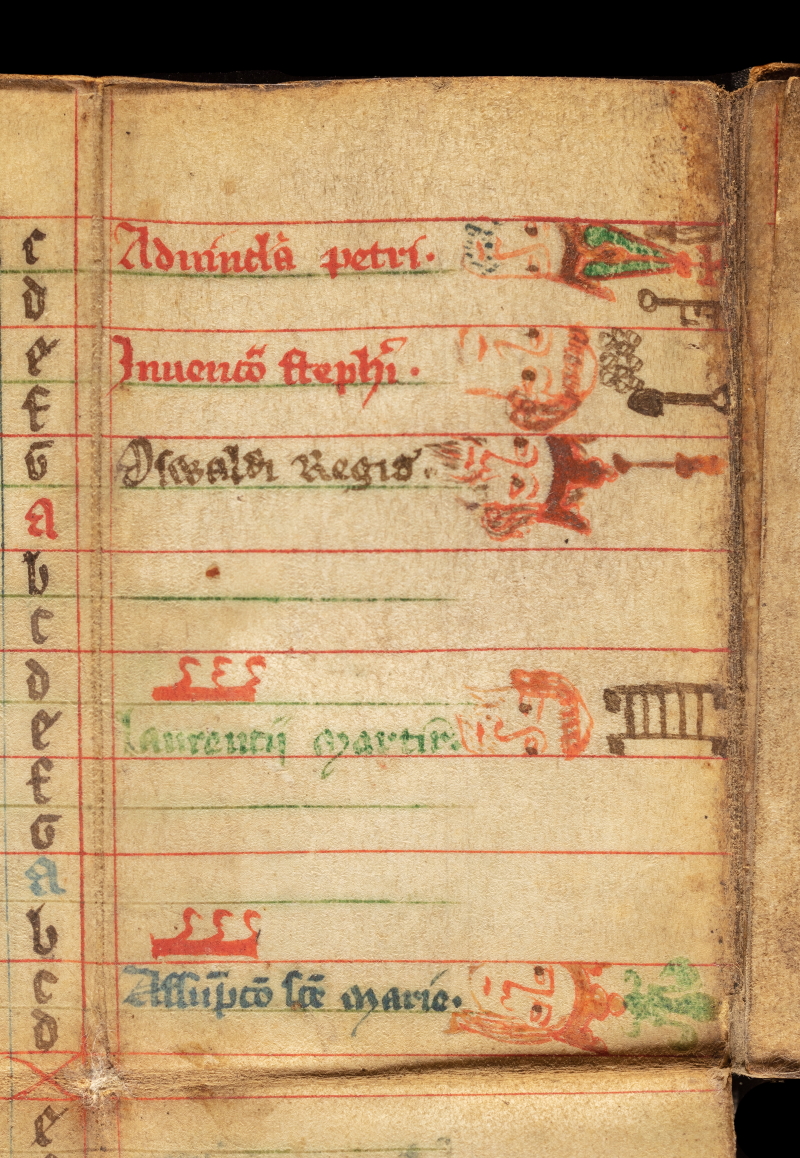 It will be noted that this hierarchy still reflects the relative cost of the pigments that were typically used for these colours (the most expensive being lapis lazuli then azurite, followed by vermilion, next verdigris and finally gallo-tannic ink) yet in MS/45 the blue was, as we have seen, indigo rather than either of the two mineral versions. Here, then, the symbolical value of the colour blue has been preserved - yet divorced from the actual cost of the material that was used.

In sum, identifying the pigments even of a restricted palette can shed new light on a medieval manuscript, whatever its grade.'

To find out more about the manuscript take a look at our Google Arts & Culture story:

MS/45 has been fully digitised. Images are available on the Royal Society Picture Library, and you can find videos on a digital surrogate showing the complex folded composition, and on the analysis and restoration of the manuscript, on our YouTube channel.