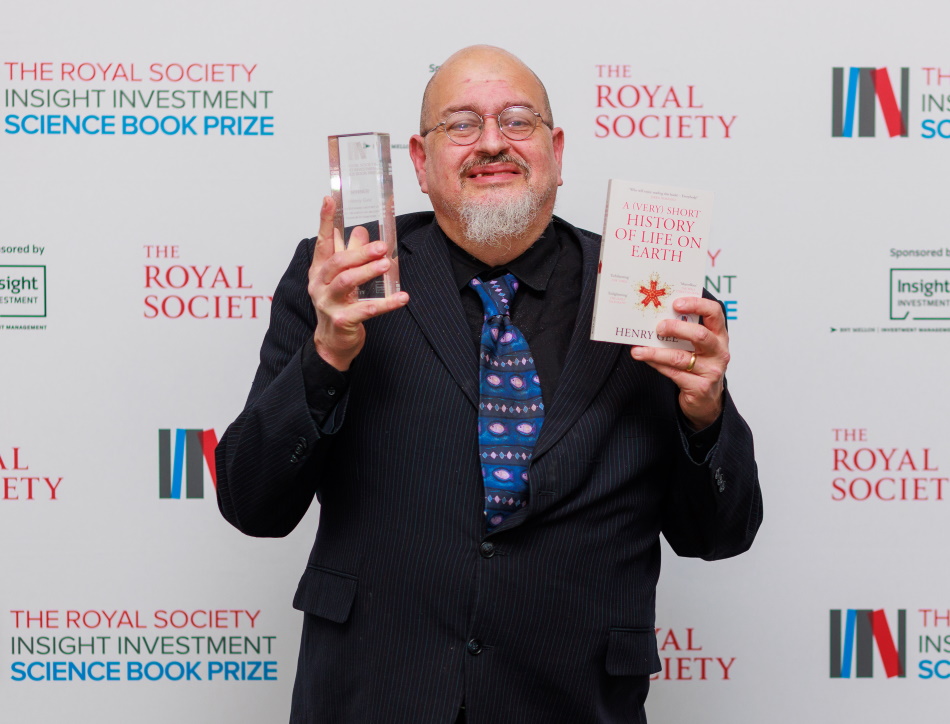 A (Very) Short History of Life on Earth: 4.6 Billion Years in 12 Chapters by Dr Henry Gee is the winner of the 2022 Royal Society Science Book Prize, sponsored by Insight Investment. The announcement was made during a ceremony at the Royal Society in London and Gee was presented with his trophy by Sir Adrian Smith, President of the Royal Society. Physicist Jim Al-Khalili – author, broadcaster, and Royal Society Fellow – acted as host for the evening’s proceedings.

In A (Very) Short History of Life on Earth, published by Pan Macmillan, Gee zips through the last 4.6 billion years with infectious enthusiasm and intellectual rigour. Drawing on the very latest scientific understanding and writing in a clear, accessible style, he tells an enlightening tale of survival and persistence that illuminates the delicate balance within which life has always existed.

The author was born in the UK in 1962 and for more than three decades he has been a writer and editor at the international science journal Nature as well as a palaeontologist and evolutionary biologist. Gee’s previous books include The Accidental Species: Misunderstandings of Human Evolution and Across the Bridge: Understanding the Origin of the Vertebrates. In a recent interview with BBC Radio 4’s Inside Science, he said “the history of life on earth is a rattling good story if one cuts out a lot of the digressions and just keeps focus on the narrative of the earth; of life just trying to hang on no matter what the earth is doing to it”.

This is a book that the judges found truly immense in scale, a tour de force covering a huge amount of science in an entertaining tone with a remarkable thriller-like element in the repeated extinction and rebirth of life on earth. They were left in awe of the staggering scientific discoveries rendered in vivid detail with astonishing descriptions of dinosaurs and other ancient life forms, demonstrating the wonders that we can find through science and the tremendously broad perspective that evolutionary history lends. As a reading experience, they found it to be humbling, miraculous, and ultimately profoundly moving – reminding us that, as Gee writes in the book’s epilogue, humanity’s legacy “will leave no more than a layer, millimetres thick, in some future sedimentary rock”.

Professor Maria Fitzgerald, chair of the 2022 judges and an internationally recognised neuroscientist specialising in pain in infants and children, said:

“This is history like you have never read before. Henry Gee takes us on a whirlwind journey through 4.6 billion years through the birth of the planet Earth, the emergence of life and the evolution of man, a species that is not only aware of itself but also of what will happen next.   As Gee races through millennia, momentous physical and biological changes are described with immense skill and dynamism combined with almost poetic imagery. The last chapter, ‘The Past of the Future’, reminds us of our relative insignificance and that each species facing extinction does so in its own way. But ‘do not despair’, he urges us: ‘The Earth abides, and life is living yet.’”

“With a unique and fresh approach that will appeal to a wide readership, Gee expertly demonstrates just how fascinating and timely a ‘history of life on earth’ can be. From the big bang to the future demise of the planet, via numerous flukes of evolution and sudden mass extinctions along the way, this book does what all good science writing should do: it makes us see the world around us in a totally different way, and instils a renewed wonder for life itself. I am delighted that this year's winner – and indeed the shortlist as a whole – show that popular science writing continues to excite, challenge and inform us in equal measure, while the standard of talent on display is as high as ever.”

Tonight’s award ceremony saw five of the shortlisted authors appear in two panel discussions: Gee paired with Nick Davidson; and Professor Rose Anne Kenny with Professor Peter Stott and Anjana Ahuja. As the culmination of the evening’s proceedings, Gee received a cheque for £25,000, with £2,500 awarded to each of the shortlistees.

Gee has been praised by Simon Ings in The Times for a book which “exhilaratingly whizzes through billions of years... Gee is a marvellously engaging writer, juggling humour, precision, polemic and poetry to enrich his impossibly telescoped account... [making] clear sense out of very complex narratives”. Meanwhile, Adrian Woolfson of The Washington Post calls it an “exuberant romp through evolution, like a modern-day Willy Wonka of genetic space”.

Over the past 34 years, the prize has promoted the collective joy of popular science writing and has celebrated game-changing titles which have illuminated the wonders of science. The books recognised by the prize each year represent captivating and urgent writing which reflects the place of science in our cultural landscape. They exemplify the extraordinary variety of topics and narrative style within the genre, and the role that great writing plays in bringing outstanding research and ideas to a wider audience.