A look at the electrical experiments of Italian physicist and instrument-maker Tiberius Cavallo FRS.

'Having accidentally observed that an electric shock sent over the surface of a card, marked a black stroke upon a red spot on the card, I was from this induced to try what would be the effect of sending shocks over cards painted with different water colours.'

The majority of our Picture Library content is derived from the biological sciences, so you may be surprised to learn that our best-selling print is the chromatic scale shown below: 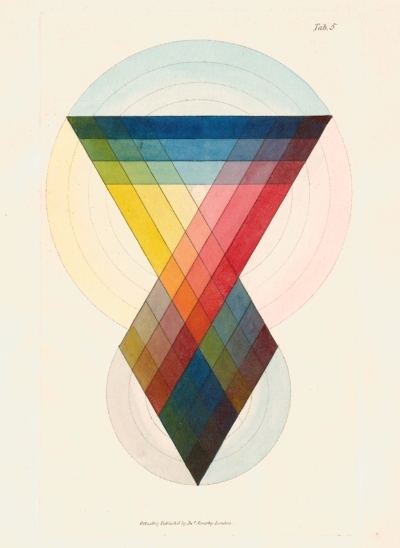 I recently came across another colourful illustration from a paper whose author, the Italian physicist and instrument-maker Tiberius Cavallo FRS (1749-1809), hoped in his introduction to snare ‘the attention of the curious’ at the Royal Society. The section entitled ‘Experiments on colours’ observes the effect of sending electric shocks over the surface of a card painted with watercolour. Although Cavallo was interested in the properties of the pigment and how the electric discharge affected it, the result is an interesting and early visualisation of electricity. As Cavallo wrote,

‘Having accidentally observed that an electric shock sent over the surface of a card, marked a black stroke upon a red spot on the card, I was from this induced to try what would be the effect of sending shocks over cards painted with different water colours. Accordingly I painted several cards with almost every colour I had, and sent shocks over them when they were very dry…’ 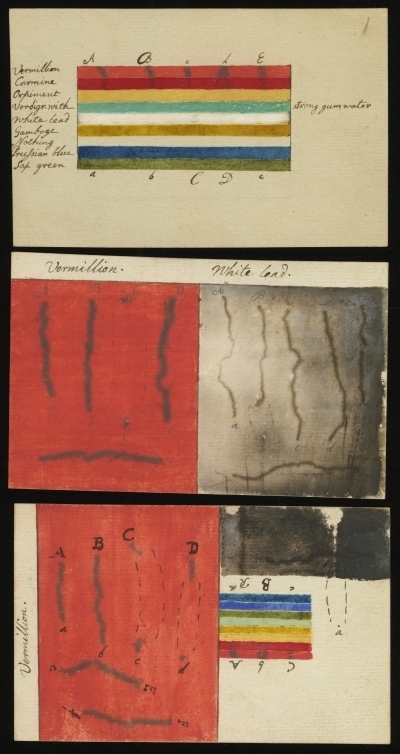 As you can see from the results, Cavallo observed that vermillion, carmine and white lead were affected by the electricity, while verdigrease ‘shook off the surface of the card.’ Orpiment, gamboge, sap green, red ink and Prussian blue showed no changes at all, leading him to speculate that the sulphur in the mineral from which vermillion is made might be causing the reaction. He went on to experiment with oil paint mixed with linseed oil, with explosive results.

Cavallo seems like an interesting character: later in his paper, in the ‘Promiscuous experiments’ section, he observes the effects of static electricity generated from stroking a cat, among other things. He submitted a number of papers on electrical experiments that were published in the Philosophical Transactions, and gave no fewer than 13 successive Bakerian Lectures (one of the Royal Society’s premier awards) from 1780 to 1792, which hints at his status as a respected experimenter and charismatic figure.

Included in the Society’s portrait collection is a small silhouette of Cavallo, unfortunately unattributed. However, we know he also made silhouettes as a hobby, and invented a device for taking profiles, so it’s tempting to imagine that our silhouette is a self-portrait created with his own invention. 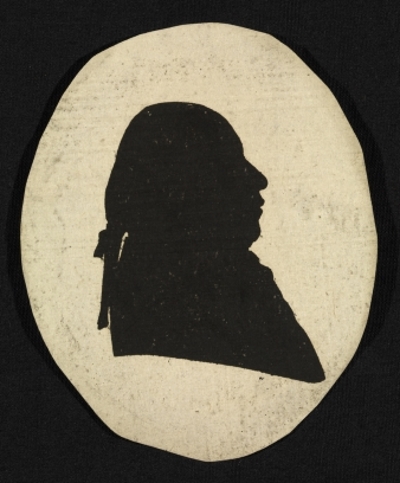