A reason to rejoice for the Royal Society’s archive team this February: every item in the New Letter Book series is now fully described!

Not only does the series give a great insight into the daily workings of the Royal Society, its Fellows and its papers, but it also reveals an eclectic array of incidents in the name of science.

A reason to rejoice for the Royal Society’s archive team this February: every item in the New Letter Book series is now fully described! These 73 volumes contain the Royal Society’s outgoing correspondence for the years 1885-1931, and provide a tantalising behind-the-scenes account of how the Society was run. Over 67,000 entries have been added to the online catalogue, now fully searchable, and the work of numerous cataloguers since 2014.

But what to search? If you’re at a loss, we thought we’d reveal what actually goes on within the realms of ‘administrative correspondence’. Not only does the series give a great insight into the daily workings of the Royal Society, its Fellows and its papers, but it also reveals an eclectic array of incidents in the name of science. My fellow cataloguer Umut and I have brought together a sample of our favourite finds from the series.

New Letter Books 65-68 contain correspondence relating to the Orang Pendek, a humanoid cryptid along the lines of the famous bigfoot and yeti. It was believed to reside in Sumatra, Indonesia, and to be either a prehistoric human that has somehow survived to the present day, or a close relative of the Orang-utan, adopting a bipedal lifestyle, much like this ‘Man of the Woods’ illustration from the 18th Century: 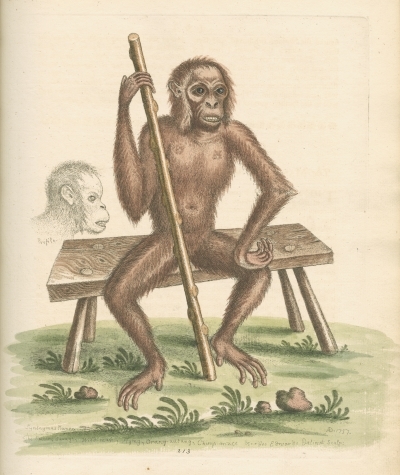 NLB/65/730 shows the first correspondence in December 1923, in the form of a letter from a Mr. E.H. Siebs, who had sent newspaper cuttings with translations of reports of the creature. Surprisingly, the Royal Society set up the Sumatra Ethnological Expedition Committee to find the creature [NLB/65/846]. It may seem unusual for a prestigious scientific organisation to take tabloid reports so seriously; however, the secretive Okapi, after many years of sightings, had been formally discovered as late as 1901, so clearly there were still large animals left undiscovered in the world. Siebs was consulted in February 1924 with the preparations needed for a naturalist and ethnologist, Dr. T.T. Barnard and Mr. M.D. Hill, to travel to Sumatra. This included journey times, accommodation, where equipment could be bought and how much it would cost [NLB/66/43].

The Royal Society needed to clear one international hurdle before a party could travel. Sumatra was then part of the Dutch East Indies, requiring the permission of the Dutch government. By July 1924, the expedition was ready to move. However, as NLB/66/781 reveals, no response had come from the Dutch Government. A reply did finally come, and we can guess what this was from NLB/67/351, dated 8 December 1924. It seems the Dutch decided to set up their own committee to look into the Orang Pendek, and so, essentially, the Royal Society was no longer needed. Whether the Dutch Committee were either less convinced by Siebs’s reports or simply did not want a British Expedition trampling around Sumatra is unclear, as by 1925 the Royal Society did not have any news on the matter, and ceased all activities itself (NLB/68/479). Much like the Orang Pendek itself, we have been unable to confirm if a Dutch expedition ever existed.

The Royal Society facilitated all sorts of adventurous aims. It was one of London’s intellectual hubs, and a glamorous place for other Societies to host their meetings. The letters discussing arrangements tell us everything from the highbrow concerns of the leading minds of the day, to the petty intrigues over biscuits (see NLB/66/816 for the time the Royal Society had a spat with McVitie’s in the 1920s). There were societies for disseminating all sorts of knowledge, with frequent correspondents including the Egypt Exploration Society and the fabulously named Society for the Exploration of the Arctic Regions by means of the Airship (‘Aeroarctic’, as they styled themselves). The latter was formed in Germany in 1924, and entries like NLB/72/449 show that the Royal Society financed it. We were delighted to discover that, in an era of epic Antarctic exploration, the Arctic certainly wasn’t forgotten. You can picture these explorers traversing the arctic skies like something out of Philip Pullman’s Northern Lights – proof that truth really is stranger than fiction. 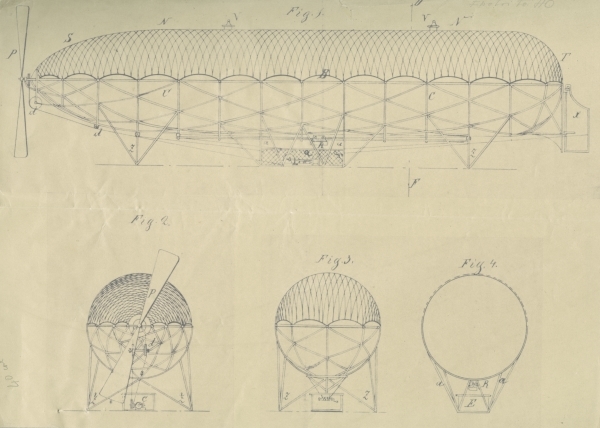 Occasionally, boundaries were crossed in terms of what the Royal Society deemed acceptable behaviour. One example comes from the Viking Society, which was formed in 1892 to encourage the study of that particular part of Scandinavian culture. A few of its members even tried to recreate it – NLB/69/785 shows how the Royal Society had to tell the President of the Vikings that he couldn’t sing his address during a meeting! 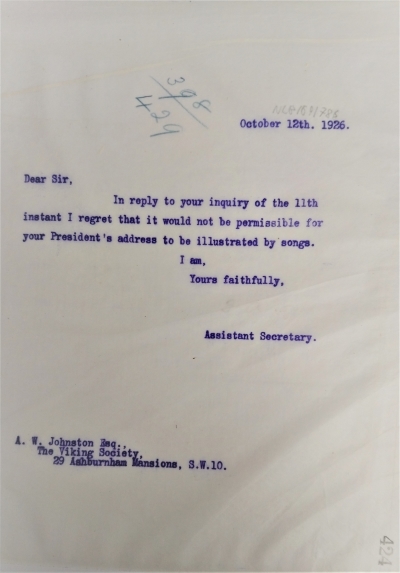 The Royal Society has had many illustrious correspondents, but a highlight has to be letters written to and from Professor Albert Einstein. In 1925, Einstein won the Royal Society’s prestigious Copley Medal for his theory of relativity and for his contributions to quantum theory. You can see the Royal Society’s Secretary James Hopwood Jeans (a famous physicist in his own right) definitely experienced something of a hero-worshipping moment as he wrote to congratulate Einstein on this success (NLB/68/821). Well, who wouldn’t? He speculates that Einstein is the youngest person to receive the Copley Medal – or if not, he ‘ought to be’! Jeans very much hoped to meet Einstein at the Royal Society’s Anniversary Dinner that year, to award him that ‘highest honour which the Royal Society has in its power to award’, but sadly it seems that Einstein couldn’t come on this occasion. We still have some letters written by Einstein in the archive, though, if this has piqued your fancy. 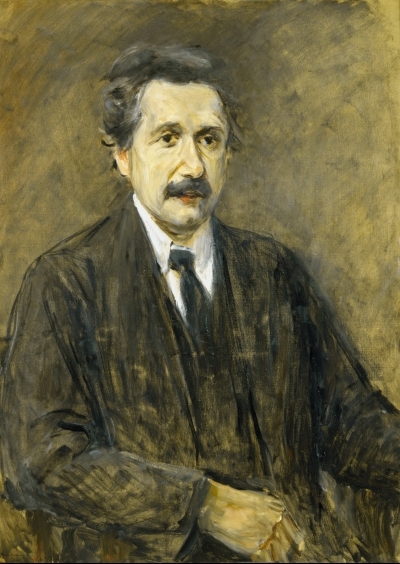 Portrait of Albert Einstein by Max Liebermann, 1922 © The Royal Society

Of course, the NLB series often only shows half of the conversation, yet alongside the Royal Society’s other records, the series records a long-gone scientific world in tremendous detail. The portion we catalogued, 1922-1931, covers a good chunk of the inter-war years. It’s refreshing to see evidence of international co-operation and community, as scientists re-established connections disrupted by World War I. Since its creation, the Royal Society has had strong international leanings – its first Secretary was the German natural philosopher Henry Oldenburg – and the early Twenties are filled with letters to German institutions. They speak of resuming exchanges between German and English scientific publications, for example, in letters from institutes in Hamburg (NLB/64/297) and Würzburg (NLB/64/236). Newly formed countries such as Czechoslovakia and Austria are also represented. New exchanges were created with gusto: the 1930 Yearbook dedicates almost ten pages to contacts established across six continents: 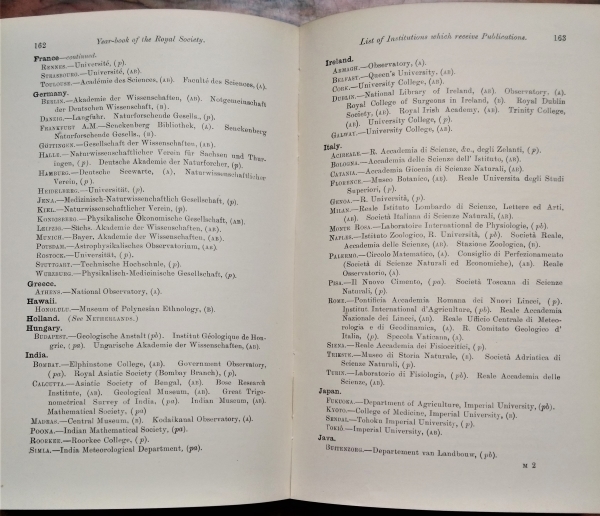 With the conclusion of this five-year project, we hope that researchers will begin their own expeditions into the New Letter Book series.