Inspired by goings-on in his garden, Rupert Baker hunts for squirrel images in the collections of the Royal Society Library.

‘This animal was taken in the young state in a library at Madras, where the old one had formed a nest in a large book, into which she had perforated.’

I’ve been doing a bit of squirrel observation recently. My working-from-home desk overlooks our back garden and there’s a busy grey squirrel who has been active all spring and summer. With little imagination, we’ve named it Cyril, fully aware we have no evidence at all on whether it’s male or female – tricky to tell from a distance, apparently.

Inspired by Cyril, I thought I’d take a look in our Picture Library to see if any of his (or her) cousins have been depicted by more rigorously scientific observers. Do we have squirrels in the Picture Library? Of course we do… 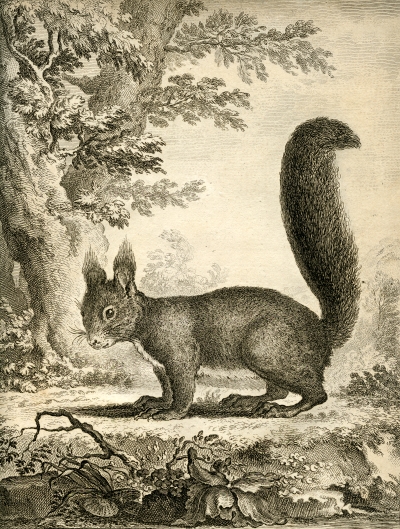 The earliest image is this rather charming (black and white) red squirrel from volume 7 of the Histoire naturelle, généralle et particuliére… (1758) by Royal Society Fellows Georges-Louis Leclerc, Comte de Buffon and Louis Jean Marie Daubenton. I’ve only ever seen similarly-coloured squirrels in my father-in-law’s garden in France; Cyril’s ilk have, of course, largely ousted the red variety from most of England. If I ever do cross paths with a red squirrel this side of the Channel, I’ll be happy to watch from a very safe distance, having read this New Scientist article. Ewwww!

I often see Cyril hopping along the top of my rather rickety garden fence, and am grateful that s/he’s light enough to get away with it. This Malayan giant squirrel, one of the residents of the famous Knowsley Hall menagerie in the 1840s, would probably bring the whole lot crashing down: 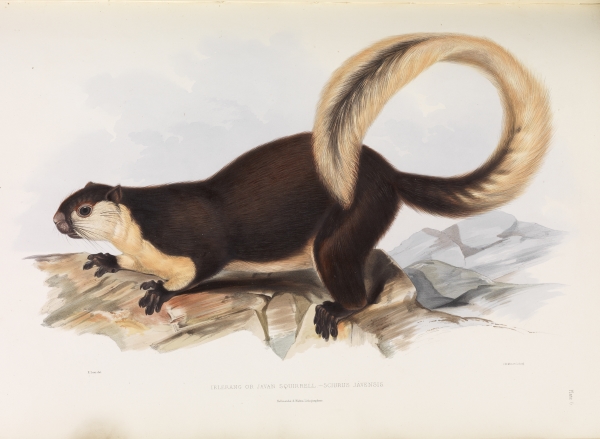 This impressive beast was drawn in 1846 by Edward Lear, who we’ve previously encountered as a collaborator of husband-and-wife team John and Elizabeth Gould. Lear is also responsible for another Sciuridae family member in our image collection, the Mexican tree squirrel from The zoology of Captain Beechey’s voyage (1839): 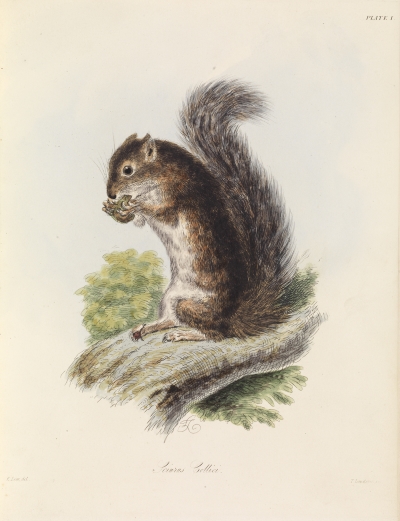 This particular Lear illustration was then engraved for printing by Thomas Landseer, another name familiar to readers of this blog. I wonder if the two were personal friends, and whether their families went to the same parties? Big parties, if so: Lear, as I mentioned before, had nineteen older brothers and sisters, and Landseer was the eldest of a tribe of fourteen, including fellow artists Charles, Edwin and Jessica.

Anyway, back to a couple more squirrels: the first plate of Indian zoology (1790) by Thomas Pennant FRS shows a fine specimen of Ratufa indica, the Indian giant squirrel: 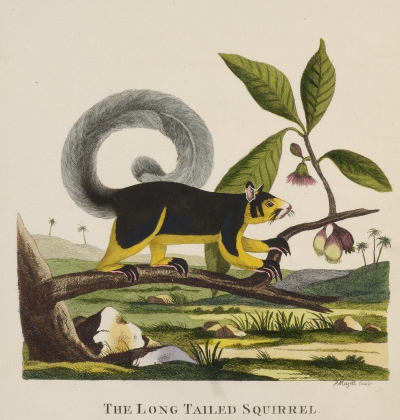 Not that Pennant would ever have seen the creature first-hand: although noted for his jaunts around the British Isles (we’ve bumped into him in the Devil’s Kitchen), he never ventured farther than Europe, relying on specimens from the collection of former Dutch East India Company employee John Gideon Loten FRS.

Last, and by all means least as far as this disapproving librarian goes, we have the Indian palm squirrel, as drawn and engraved for William Elford Leach’s Zoological miscellany (1815) by the wonderfully-named Richard Polydore Nodder: 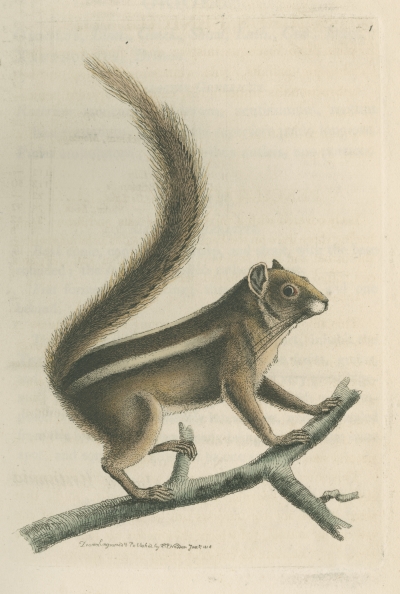 The diet of the palm squirrel consists largely of nuts and fruits, according to its Wikipedia entry; however, Leach reports that the critter in the picture had a particularly horrifying older relative with more literary tastes:

‘This animal was taken in the young state in a library at Madras, where the old one had formed a nest in a large book, into which she had perforated.’

I might need to have a little lie down after typing that, and am hoping that the St James’s Park squirrels haven’t been emboldened to cross the Mall and start exploring the Royal Society’s book collections while I’ve been at home watching Cyril’s antics. I think our vaults are squirrel-proof…