‘Vesuvius continues to smoke considerably, and we had a slight shock of an earthquake yesterday, so that I do not think, notwithstanding the late eruptions having been so very considerable, that the volcano has vented itself so sufficiently as to remain long quiet.’

It’s been just over a year now since the COVID-19 pandemic forced the Royal Society library to temporarily close its doors to the public. We're certainly looking forward to welcoming researchers back as soon as it’s safe to do so. In the meantime, this extended closure has placed further emphasis on expanding access to our collections digitally and remotely. Last autumn we launched a new version of our online collections catalogue, and we added our copy of Robert Hooke’s Micrographia to our Turning the Pages platform last summer.

We actively create digital surrogates of archive material from our collections, but we don’t yet have the facilities to make all these available online. To address this, the Society is implementing Preservica as our new digital preservation platform. This will enable us to better manage digitised images and preserve our growing collection of born-digital records. We’ve already begun the task of ingesting our existing digital assets into the system, which is certainly no small feat! 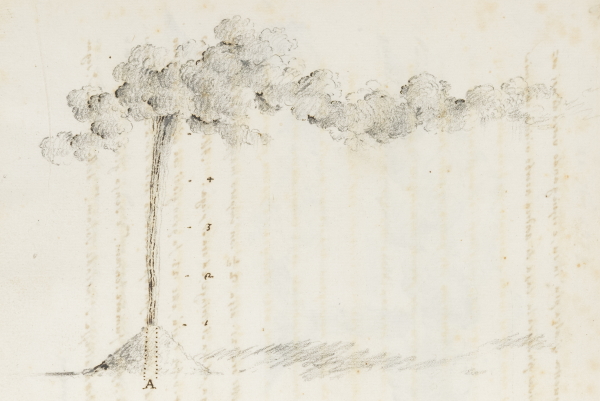 Piaggio’s sketch of the eruption of Vesuvius on 21 August 1779, with height indications (from MS/2/1)

The first collection of digitised images we uploaded to the new platform caught my eye, and I was surprised to find we hadn’t covered these items on the blog before (although they were filmed for Objectivity a few years ago). The images in question are of MS/2, a series of diaries spanning the years 1779 to 1795, containing observations and sketches of Mount Vesuvius. These were kept by a priest named Antonio Piaggio, who worked as a conservator of manuscripts for the Vatican Library, at the request of Sir William Hamilton FRS.

From 1764 until 1800 Hamilton served as Britain’s ambassador to Naples, where he developed a great interest in volcanology. He provided the Royal Society with a detailed account of the 1766 eruption of Mount Vesuvius, which was published in the Philosophical Transactions and secured his election to the Fellowship. Over the next few years, he sent further reports to the Society, often accompanied by volcanic samples he collected himself. He was awarded the Society’s Copley Medal in 1770 for his account of an expedition to Mount Etna, and in 1776 his letters were compiled in Campi Phlegraei: observations on the volcanos of the two Sicilies, which contains stunning colour illustrations by Italian painter Pietro Fabris. 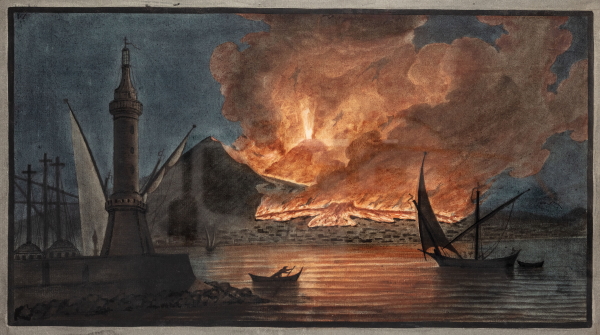 View of the eruption of Vesuvius on 20th October 1767, painted by Pietro Fabris for William Hamilton’s Campi Phlegraei

1779 saw another significant eruption of Vesuvius. Hamilton’s account, again published in the Philosophical Transactions, recounts the volcano’s activity throughout the summer, and describes the destruction caused in several small towns to the east of Vesuvius following the eruption. At the end of the report, Hamilton states that ‘Vesuvius continues to smoke considerably, and we had a slight shock of an earthquake yesterday, so that I do not think, notwithstanding the late eruptions having been so very considerable, that the volcano has vented itself so sufficiently as to remain long quiet.’ To ensure that Vesuvius’s ongoing activity was recorded, Hamilton engaged Antonio Piaggio to keep daily logs on his behalf.

Piaggio himself is an interesting figure. In 1750 the Villa dei Papiri was discovered at Herculaneum, the Roman town destroyed along with Pompeii in the 79AD eruption of Vesuvius, and Piaggio was sent to Naples to assist with reading the papyrus scrolls that had been carbonized when the town was obliterated. He invented a machine that used weights to carefully open each scroll (the first took four years to unroll completely), with scribes copying the text as each line became readable. Many scrolls were transcribed in this manner but sadly destroyed in the process; the rolls often fell apart on the machine and exposing the inks to air caused them to quickly fade. 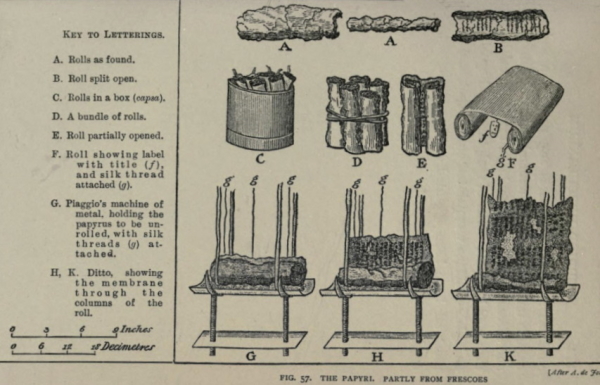 Piaggio remained at the Basilica of Santa Maria a Pugliano in the town of Resina (now called Ercolano), just to the west of Mount Vesuvius. This gave him a perfect vantage point from which to observe the volcano as Hamilton had requested. Piaggio’s notebooks contain his notes on Vesuvius, accompanied by numerous sketches of the volcanic activity he was witnessing. There are eight in total, including one that contains Piaggio’s own observations of the 1779 eruption. The main sequence consists of six books running from September 1779 until March 1794, a period when Vesuvius was frequently active. 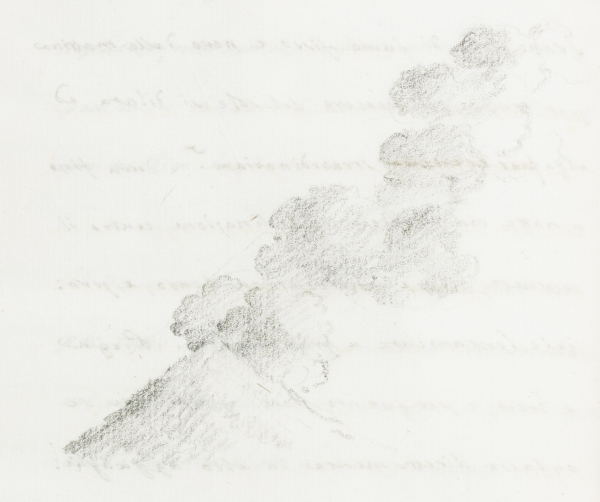 Unfortunately, Piaggio broke off a few months short of the enormous August 1794 eruption, which Hamilton stated was the fiercest he had ever experienced. A final volume was started in 1795 as an attempt to resume the work, though this appears to have been short-lived and Piaggio’s death in 1796 put an end to any further records. Despite his diligent work on Hamilton’s behalf, the diaries never really saw much contemporary use. Hamilton makes passing reference to them in his accounts of the 1784 and 1794 eruptions, but his letters largely contain his own recollections of the events. After Piaggio’s death the books must have passed into the hands of Hamilton, who donated them to the Royal Society in 1801.

In his accompanying letter to Sir Joseph Banks, Hamilton writes that he ‘finds himself too old and indolent’ to pen a paper about their contents for the Philosophical Transactions, though he hopes another Fellow might take up the task. Sadly, nobody did. Perhaps the fact that they are written in Italian prevented them from being consulted more widely. So, this remarkable set of volumes ended up sitting largely unused in the Society’s library, which is a rather poor fate considering the 15 years of work that Piaggio put into them.

Piaggio’s diaries perfectly illustrate why Preservica is such an important step for the Society’s archive. Eventually, we will make digital archive content accessible online directly via the new platform, greatly enhancing access to under-used material like these volumes in the collections. Researchers across the world will be able to consult them extensively even if they are unable to travel to London. Someday soon, you’ll be able to take a look at Piaggio’s work for yourselves, right from the comfort of your own home.