As human adults, we constantly interpret others’ behaviour in terms of mental states. In a new study in Proceedings B, the authors sought to evaluate whether non-human animals share our ability to represent others’ minds.

In a series of experiments these authors showed that dogs, in the absence of any training, are sensitive to human mental states. They reacted differently in response to a human informant with a true or a false belief. The authors tell us more about the study and its interesting findings.

For a long time, it has been argued that humans are the only species that can reason about the beliefs and intentions of others. This interpretation has been questioned with findings that nonhuman primates may possess a “theory of mind” as well. However, what about other species with whom we do not share such a close genetic similarity? Due to their long-standing evolutionary history of close cohabitation with humans, dogs represent an ideal model species for the study of the phylogenetic origins of human social behaviour and cognition. At the Clever Dog Lab of the Messerli Research Institute, we are extremely lucky to have the support of many dog owners who bring their pets to participate in our studies. Because most dogs are eager to take part in games that involve thinking in exchange for food rewards, we have the opportunity to uncover several aspects of another species’ mental life.

Five years ago, we started to investigate perspective taking abilities in dogs (see Catala et al., 2017). Dogs indeed could tell the difference between a human helper who could see the location of hidden food (“knower”) and one that could not and hence was simply guessing (“guesser”). To convincingly show that dogs reason about the hidden mental states of humans, however, we needed to go to the next level: investigating whether they might also recognise the difference between a true and a false belief. Indeed, tests of false belief understanding are somewhat the “gold standard” to demonstrate the onset of theory of mind in human children around the age of 4 to 5 years. Inspired by previous work with human children and great apes, we came up with a non-verbal game, in which dogs had the possibility to retrieve food that they had seen being hidden in one of two containers. Before being allowed to choose one of the containers, however, dogs received erroneous advice by an experimenter, who suggested to them to look for food in the container that dogs knew was empty. Would some dogs follow the (misleading) suggestion?

Interestingly, more dogs did so when the experimenter thought that the suggested container was baited (false belief), compared to when she thought it was empty (true belief). One possibility to explain dogs’ surprising behaviour is that they perceived the misinformed communicator’s (wrong) suggestion as a mistake “in good will”, but the knowledgeable communicator’s suggestion as deceitful or driven by another unknown intention. After all, human societies too are in general more clement towards accidental than towards intentional infringements. 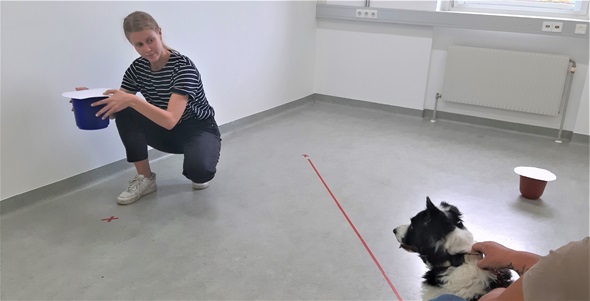 In conclusion, the results of this study confirm the earlier positive findings of dogs’ perspective taking ability by providing evidence that they might be sensitive also to human beliefs. However, further research is needed before we can draw firm conclusions about dogs’ mind-reading abilities.

The Comparative Cognition Unit of the Messerli Research Institute aims at studying human-animal interactions from an ethological perspective. This study lies at the heart of this endeavour by investigating the cognitive mechanisms underlying dogs’ learning and understanding of human actions, intentions and emotions. It is part of the project “Convergent evolution of the social brain?”, (funded by the Vienna Science and Technology Fund), a collaboration between the Clever Dog Lab (Messerli Research Institute, University of Veterinary Medicine, Vienna) and the Scan Unit of the Department of Cognition, Emotion, and Methods in Psychology of the University of Vienna. It brings together scientists with backgrounds in Biology, Psychology and Neuroscience to study central pillars of social cognition. In addition to behavioural studies, we have started to assess brain function in fully awake dogs specifically trained to participate in functional magnetic resonance imaging (fMRI) experiments, tapping into imitation, theory of mind and empathy.

When publishing with Proceedings B, we particularly appreciated the constructive feedback by the reviewers and the editor and the short turnaround time.

Proceedings B, animal behaviour, animal cognition, behind the paper