The circle of Willis

The videos from our online history of science conference, 'Celebrating the quatercentenary of the birth of Thomas Willis', are now available on demand. Rupert Baker gives an overview of the contents.

Willis's signature in our Charter Book may be faint and discreet, but the contributions of this Fellow of the Royal Society have proved to be of great significance for medicine down the centuries.

The celebrated physician Thomas Willis was born in Wiltshire in 1621. To celebrate the quatercentenary of his birth, we held an online conference on Willis’s life, work and legacy late last year. It took place on 18 November, the date in 1663 on which he was elected as a Fellow of the Royal Society.

Willis was part of a community that reshaped ideas on the structure and function of the human body in health and disease. His special interest was the brain and nervous system. He can be considered the first ‘neurologist’ of the early modern period in British medicine.

An image of the base of the brain, showing the arterial structure known as the ‘circle of Willis’, from Willis’s Cerebri anatome, 1664

The event was organised by Alastair Compston and Anna Marie Roos, editor of our Notes and Records journal. I’m very pleased to announce that the edited conference videos are now available for you to view on our Royal Society YouTube channel. In this article, I’ll guide you through the contents of each of the four themed sessions, so you can pick out the areas which interest you. I’ve provided direct links in brackets to each of the 12 presentations (which generally last between 20 and 30 minutes each), plus the panel discussions at the end of each session. 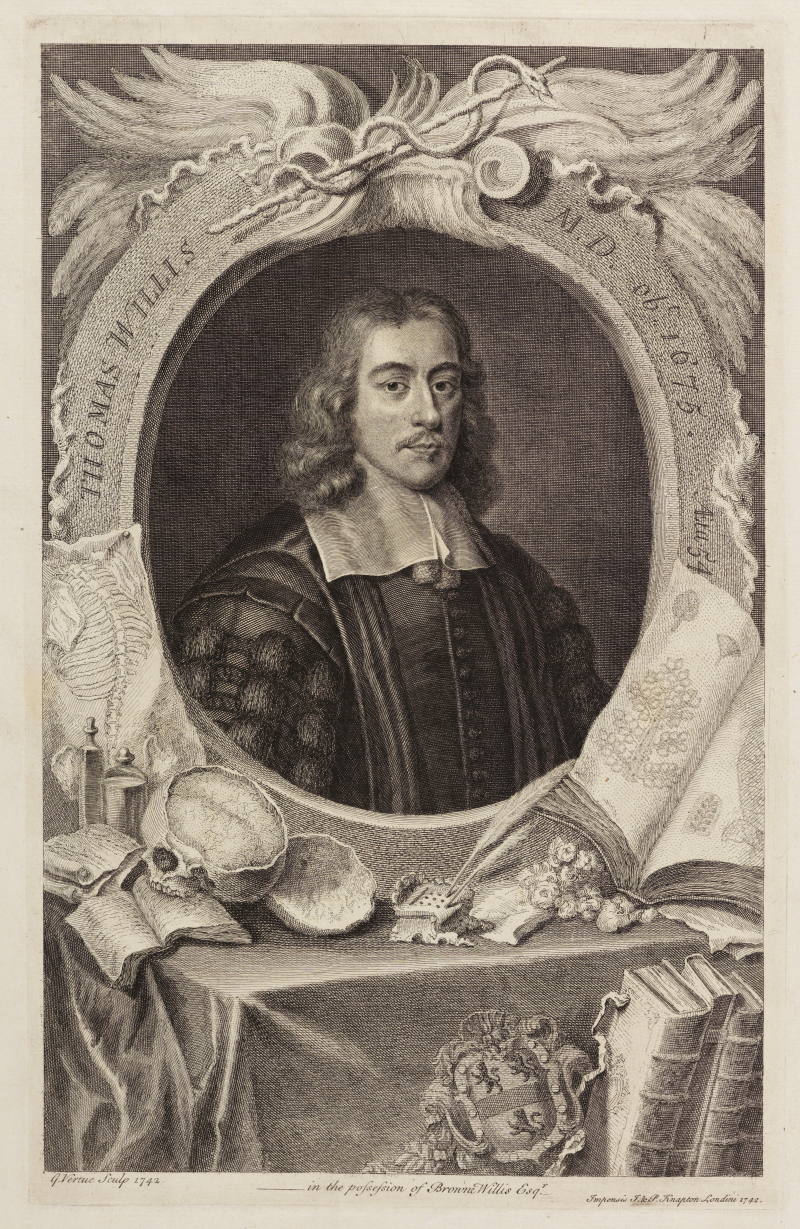 The opening session of the conference, chaired by Anna Marie Roos, set the scene by examining the status of natural philosophy in early modern England. We heard from Michael Hunter on the origins of the Royal Society and other ‘clubs for improving knowledge’, including the Oxford Philosophical Club of the 1650s (presentation 1). In a pre-recorded video, California-based scholar Louis Caron then spoke on ‘Religious and political contingency in advancing knowledge’ (presentation 2), and Alexander Wragge-Morley of the University of Lancaster followed up with a talk on Willis’s imaginative empiricism (presentation 3). The chair and two participants then took part in a lively Q&A session, responding to requests submitted by the audience on Zoom (presentation 4); Louis Caron was excused as it was 3:00am California time…

Catherine Dromelet of the University of Antwerp chaired the second session, which looked at cultural and scientific influences on the ideas emerging in Willis’s time relating to the vitality of ‘humane bodies’. Here, we heard from Antonio Clericuzio of Roma Tre University on Willis’s chemical corpuscularianism (presentation 5), and then Oxford University’s Zoltán Molnár on the anatomy of the brain and nerves, complete with the story of Willis’s early life and a view of his birthplace in Great Bedwyn, Wiltshire, as shown below (presentation 6). Session two concluded with a piece on Willis’s medical-philosophical discourse on man, by Claire Crignon of Sorbonne Université (presentation 7), and another stimulating Q&A (presentation 8).

Session three, chaired by Giles Mandelbrote of Lambeth Palace Library, detailed how the new medical and anatomical knowledge of the scientific revolution was set down and communicated through printed books and their illustrations. A topic of great interest to me and my fellow librarians, the session began with a lecture on the book trade in seventeenth century England by James Raven of Magdalene College, Cambridge (presentation 9). Conference co-organiser Alastair Compston then gave an account of Willis’s printed works, drawing on his personal book collection and his recently published bio-bibliography of Willis, All manner of ingenuity and industry (presentation 10). Antiquarian book expert Roger Gaskell concluded session three with a look at the use, re-use, copying and deterioration of the copper plates used to illustrate successive editions of Willis’s books (presentation 11, followed by discussion – presentation 12). 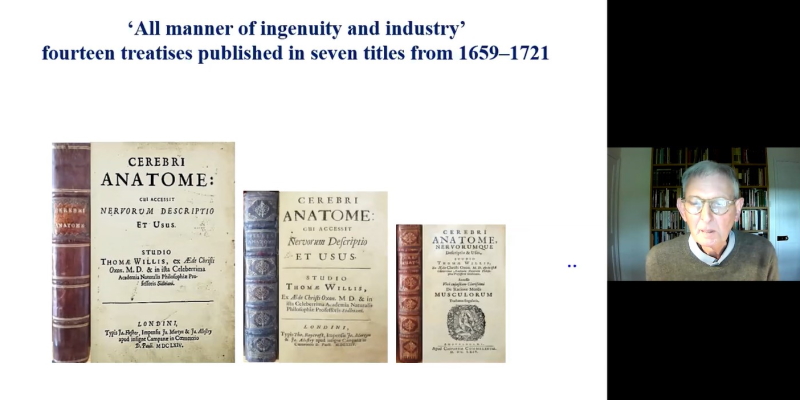 The final session of the day took a broader view of how the work of Willis and his contemporaries fed into subsequent developments in medical science. Chaired by Jan van Gijn of the University of Utrecht, Willis’s contributions and legacy in the field of reflexes and the integrated activity of the nervous system were highlighted by Miloš Judaš of the Croatian Institute for Brain Research (presentation 13). We then heard from Alasdair Coles of Cambridge University on Willis’s important place in the origins of clinical neuroscience (presentation 14), before the conference came to an entertaining close with perhaps the most intriguingly-titled talk of the day, ‘Was Thomas Willis his brain?’, given by neuroscientist and philosopher Raymond Tallis (presentation 15, followed by discussion – presentation 16).

If you want to find the answer to that question (hint: it’s complicated), do watch the video. Indeed, I hope you enjoy all the presentations, which provide a lively and varied overview of the life and times of one of the key figures in early work on the brain and nervous system. And as a final, additional link to the Royal Society, acknowledging the day on which the conference was held, here’s Thomas Willis’s signature in our Charter Book. The script may be faint and the signature discreet, but the contributions of this Fellow of the Royal Society have proved to be of great significance for medicine down the centuries. 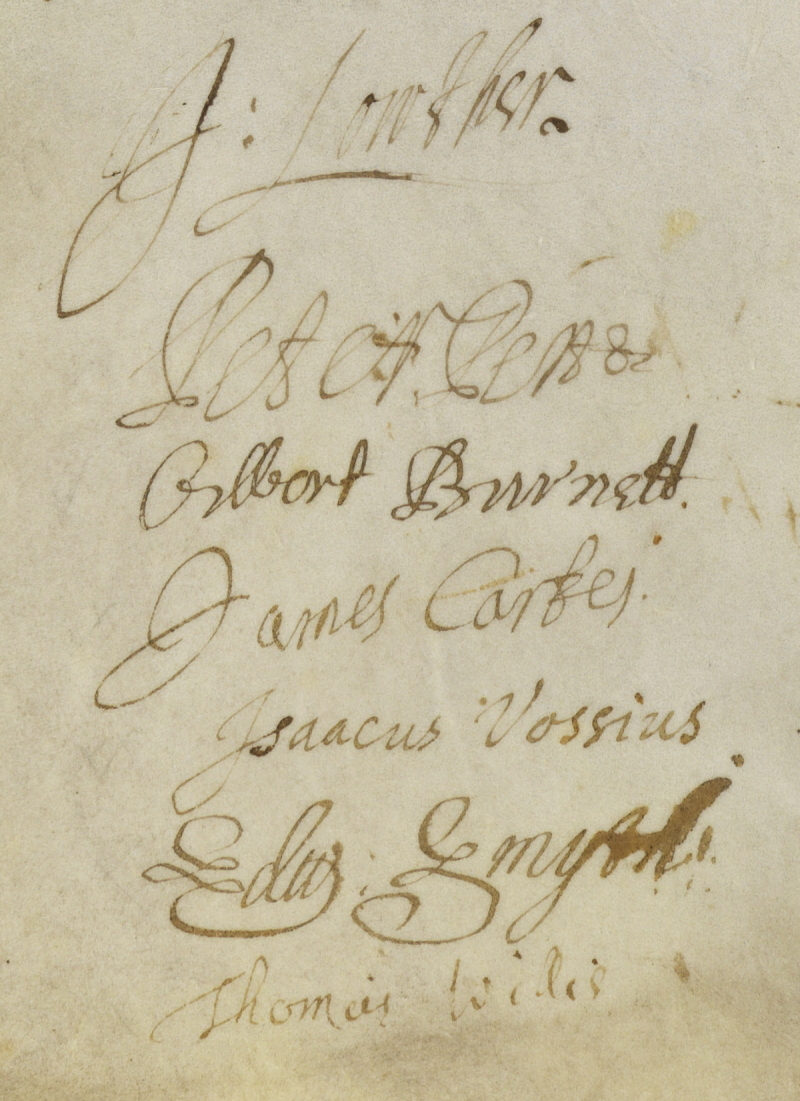