Virginia Mills takes a look at the certificates in the Royal Society's archives, highlighting some of the beautiful calligraphy on display.

As you’d expect from such a prestigious and varied Fellowship, we have everything from Nobel Prizes to shorthand speed certificates.

Most of the documents in the Royal Society archive are scientific treatises and administrative records which use words for functional exchanges and for the dissemination and preservation of knowledge. While there’s certainly a beauty in that (at least for an information professional like me), there are also occasions where words are called on to be made visually beautiful.

Back in March, I looked at some examples of calligraphy and illumination in the archive. I promised you a 'part two', so I’ve picked out some examples of fine penmanship employed at moments of celebration, achievement and ceremony, including Fellows’ Nobel certificates and congratulations sent to the Society for a notable anniversary. We’ll also focus on one particular woman Fellow of the Royal Society.

In 1912 the Royal Society celebrated the 250th anniversary of its incorporation by Royal Charter and received congratulations from all over the world, many beautifully lettered in different styles. I’ve picked out three particularly pretty examples to show you, from (L-R) the University of Bologna, the Smithsonian, and the Royal Society of Victoria; the first of them, with its extra illumination, is particularly impressive:

Among the personal papers deposited in our archive are countless examples of awards and qualification certificates received by Fellows. As you’d expect from such a prestigious and varied Fellowship, we have everything from Nobel Prizes to shorthand speed certificates: 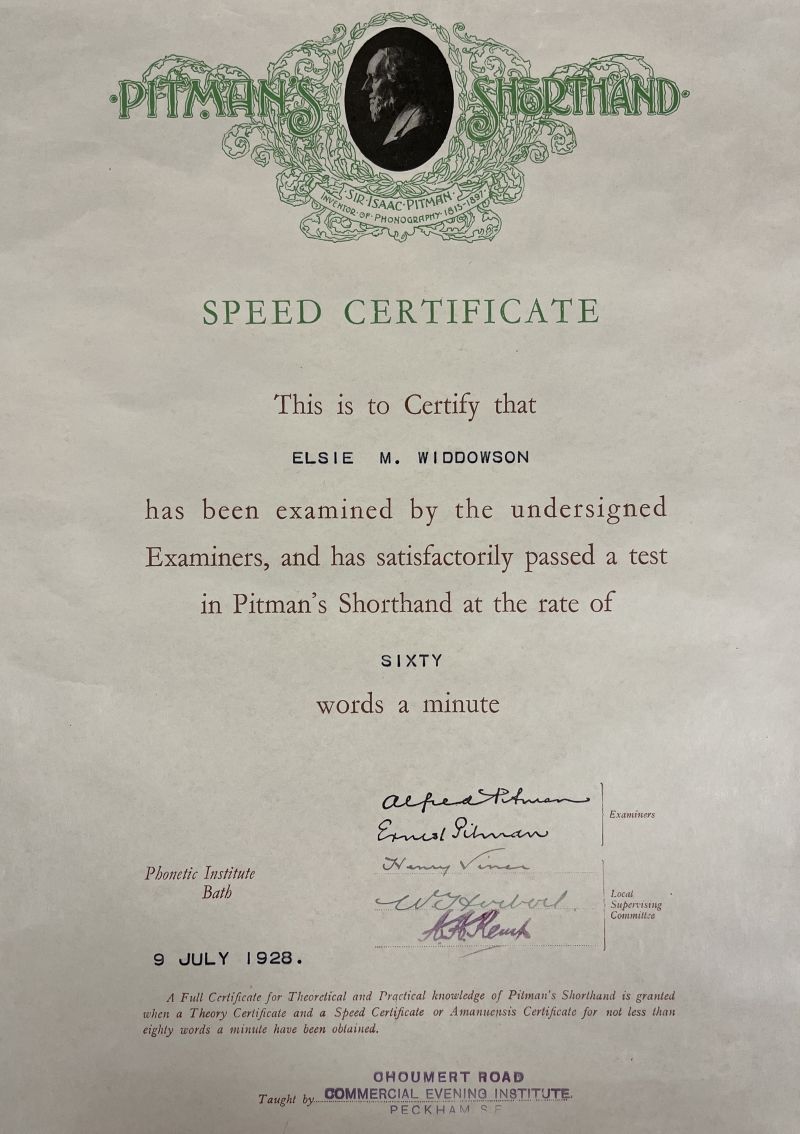 This Pitman shorthand certificate was awarded in 1928 to Elsie Widdowson (FRS 1976), and was donated to the Society with some of her other papers by the Medical Research Council a few years ago. Many Fellows and their families donate their working papers to our archive, something we very much welcome and encourage, to preserve a record of their contributions to science and incredible achievements. Elsie Widdowson is a fine example, as she went on to be one of the first women to graduate from Imperial College, University of London (then exclusively a science and technology college), receiving this Bachelor of Science degree in chemistry in 1928: 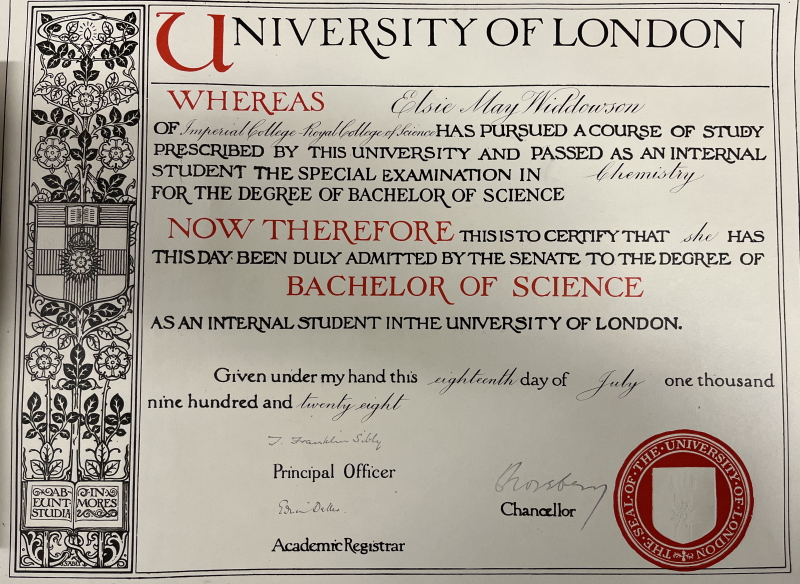 Continuing to blaze a trail for women in the sciences, Widdowson was elected to the Fellowship of the Royal Society in 1976, and in 1993 became the first female scientist selected to be a Member of the Order of the Companions of Honour: 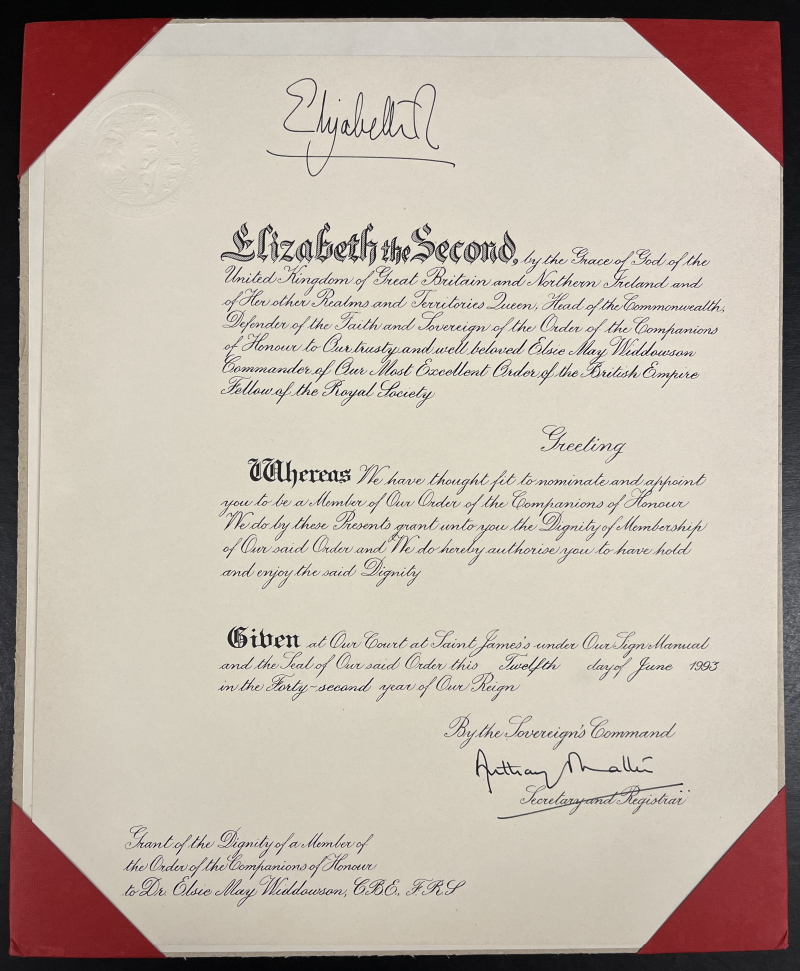 In June and July this year we’re catching up on the formal admission of Fellows elected to the Society since 2020, and you may remember that I shared some images of the ornate ‘Royal’ pages of our Charter Book in my March blogpost. When not prevented by a pandemic, admission of new Fellows is a considerable ceremony. New Fellows sign the Charter Book and receive a lapel pin and certificate. The latter is taken away by the new Fellow, of course, but some make their way back into the archive in a pleasingly circular manner. Returning to our glimpse into the papers of Elsie Widdowson, note the beautiful calligraphy on her notice of election to the Fellowship, dated 18 March 1976: 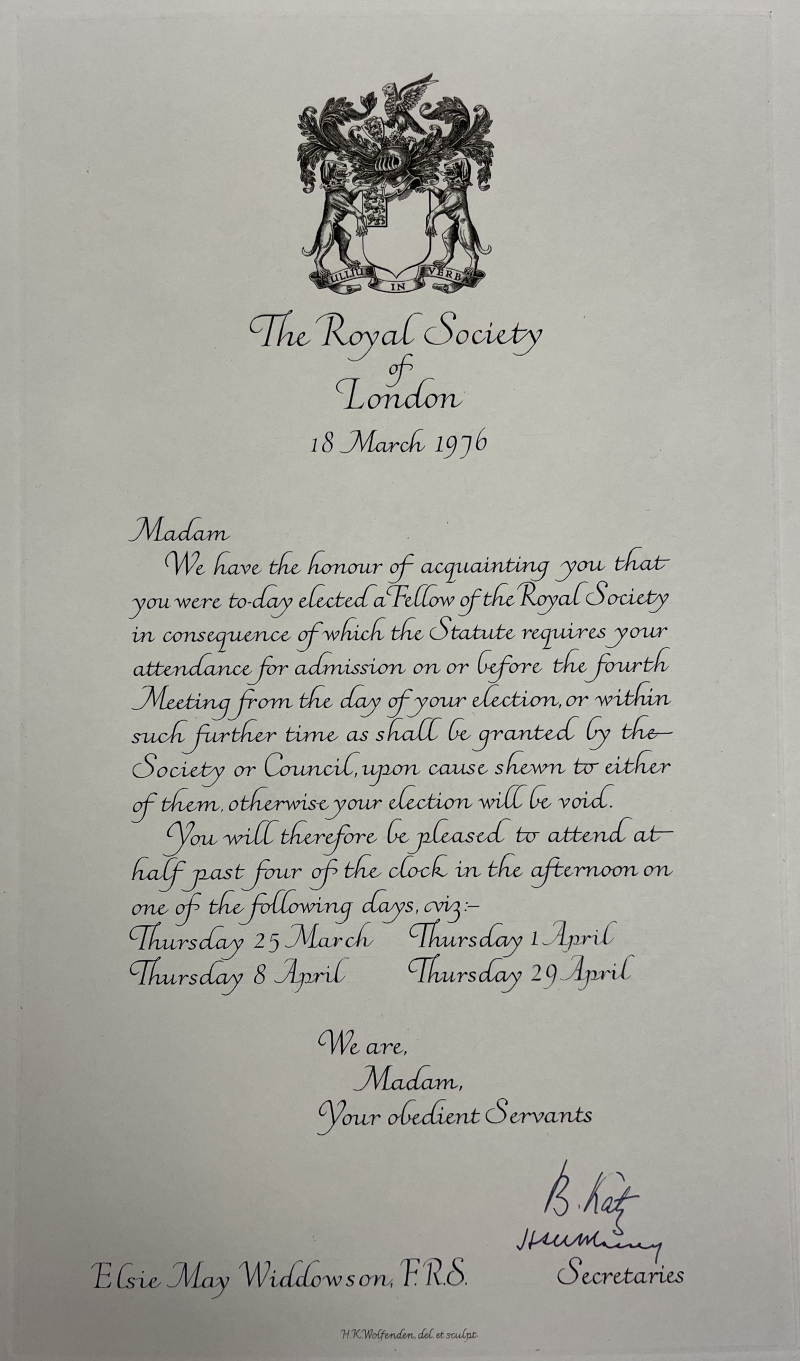 The Nobel certificates in our collection are particularly visually impressive, with artwork commissioned for many of them to reflect the nature of the prize-winner’s work. One of my personal favourites is the Nobel Prize in Chemistry awarded to John Warcup Cornforth FRS in 1975 for his work on the stereochemistry of enzyme-catalysed reactions: 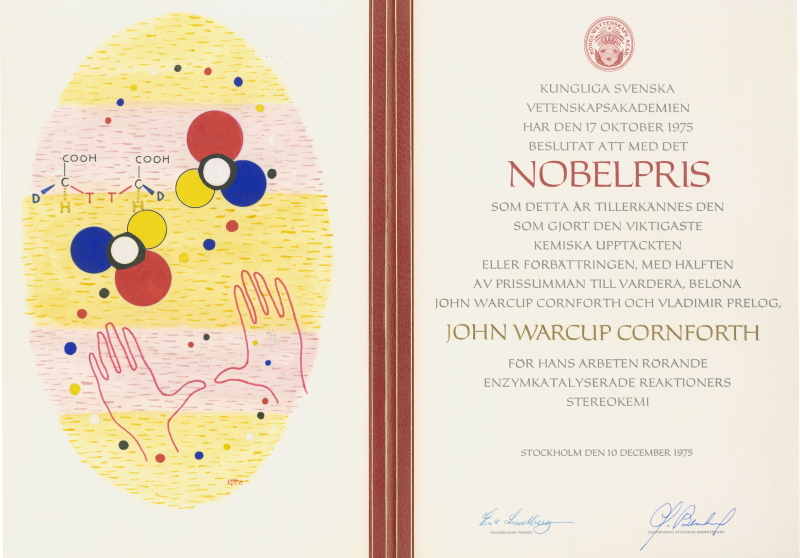 Interestingly, among Cornforth’s papers in the archive is his note on the scientific inaccuracies of the representation. The picture, by artist Tage Hedqvist, is based on the mirror image relationship of modified methyl group atoms – present in many molecules of life – which was central to Cornforth’s research in determining the stereochemistry of enzyme reactions in the group. The mirror image hands are a reference to this, but according to Cornforth (who should know), the two methyl group depictions are identical rather than being mirrored. The challenges of combining art and science!