How did the designer of a theatrical device to project ‘ghosts’ on the Victorian stage come to donate a significant collection of books to the Royal Society Library? Louisiane Ferlier investigates...

Bursting at the seams with wonderful fold-out illustrations showing cut-and-fold origami-like polygons, describing the latest machinery, outlining inventions and presenting puzzles, the books are a true delight for readers.

Now September is upon us, the flow of researchers in our reading room has abated somewhat as they return to their classrooms after a summer of archival treasure-hunting. This temporary respite has given me a chance to look further into a collection of books that has intrigued me for a while.

I first noticed a set of seventeenth century vellum-bound books, with the intriguing title ’Delitiae’ inked on their spines, when retrieving another item from our Maths section: 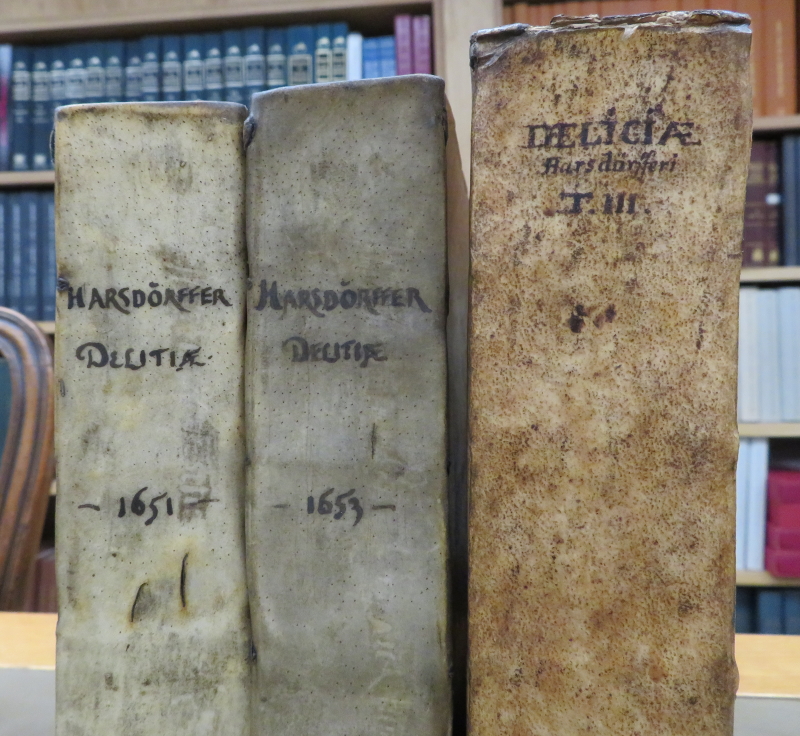 Delitiae physico-mathematicae by Georg Philipp Harsdörffer is the continuation of a popular book of recreational problems begun by German mathematician, inventor, poet and librarian Daniel Schwenter in 1636. Bursting at the seams with wonderful fold-out illustrations showing cut-and-fold origami-like polygons, describing the latest machinery, outlining inventions and presenting puzzles, the books are a true delight for readers: 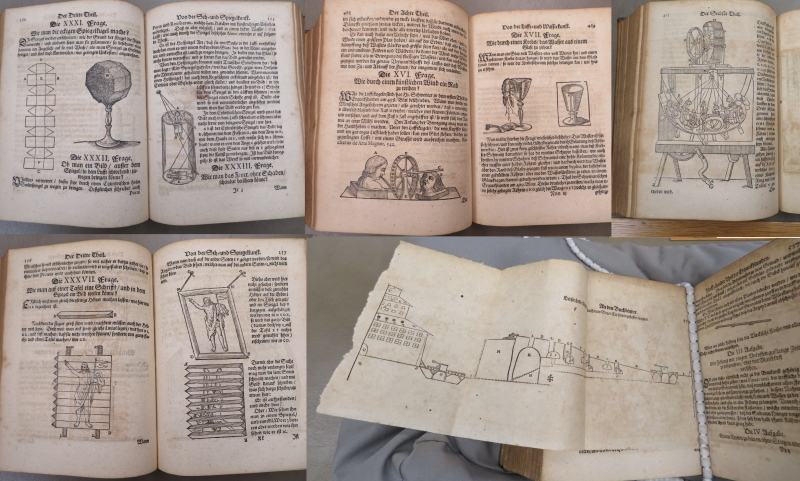 The magician Harry Houdini is known to have owned a copy; the final (1692) volume in our set, meanwhile, contains a label indicating that it previously belonged to an engineer with a few tricks of his own, Henry Dircks (1806-1873): 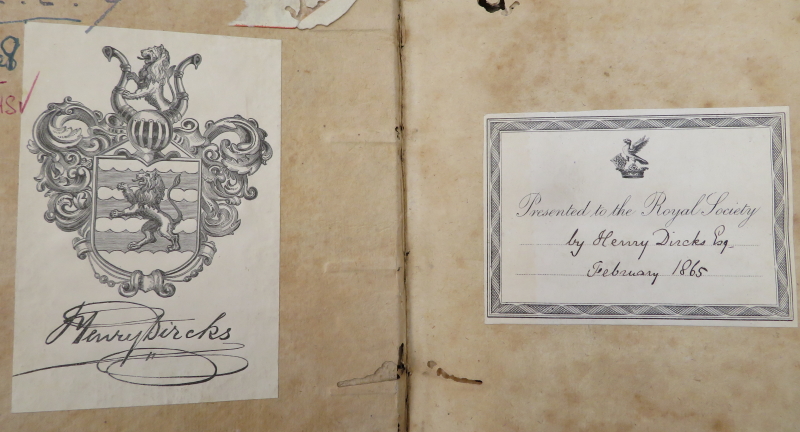 Dircks is mostly remembered for his design of a theatrical device to project ‘ghosts’ on the Victorian stage, used for the special effects in various Dickensian plays and improved upon by John Henry Pepper, whose name is now attached to it: Pepper’s ghost. 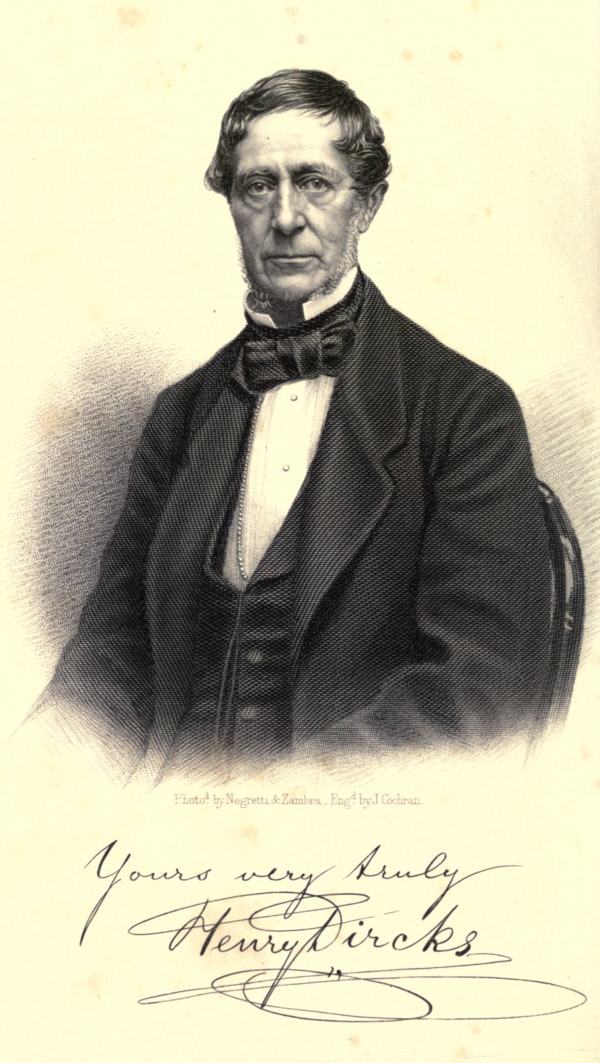 Portrait of Henry Dircks, from his Nature-study, 1870

Following this discovery, I kept finding more and more seventeenth-century vellum-bound volumes on topics related to instrument-making, inventions and scientific progress, all with Dircks bookplates or donation labels between 1863 and 1875. Also included is this beautiful copy of Georg Böckler’s Theatrum machinarum novum, another volume containing amazing engravings of machines, fire engines and mills, still bound in its original clasps – a rarity in our collections: 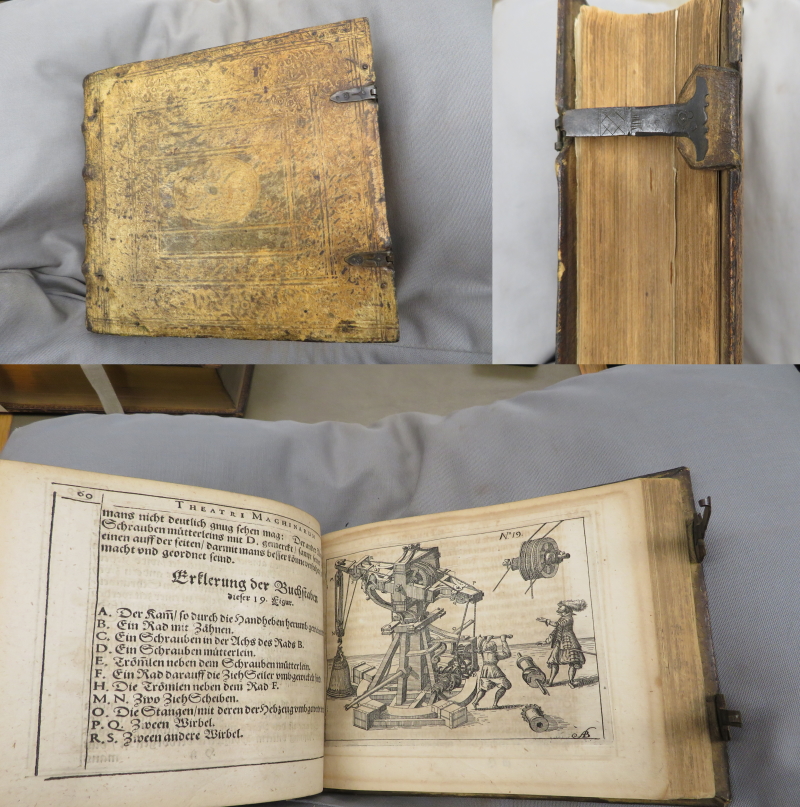 Since the early donation of the Arundel Library, the Royal Society collection of printed books has benefitted from several large gifts from Fellows. Dircks, however, was not a Fellow, and I’ve never seen him commemorated as a major donor to the collection in the current histories of the Library, only mentioned in passing in an old Notes and Records article.

Henry Dircks was proposed as a candidate for Fellowship repeatedly, in 1863, 1865 and 1872, but never elected. The dates correspond to donations of volumes to the Library, or the years in which Dircks’s major works were published: for example, his 1863 Contributions towards a history of electro-metallurgy, dedicated to Michael Faraday FRS, and his 1865 Life, times, and scientific labours of the Second Marquis of Worcester, which includes the Marquis’s list of inventions.

In addition to his own publications, the books Dircks donated clearly underpinned his research in the history of science and technology. They include various volumes by Samuel Hartlib, whose biography Dircks published in 1867 after conducting research in the Society’s archives. There are also works on perpetual motion machines, which Dircks debunked, writing in his Perpetuum mobile that ‘the history of Perpetual Motion is a history of the fool-hardiness of either half-learned, or totally ignorant persons’. Rather than a random assortment of pretty-looking antiquarian books, the collection firmly reflects his intellectual interests and scholarly pursuits.

In a letter to Walter White, Assistant Secretary of the Royal Society, Dircks vehemently criticised the idea that he had been cosying up to Fellows to seek election, so I guess he would have rejected outright any suggestion that his donations were pathways to recognition. The fact that he donated various volumes as part of his will, along with dividing his financial assets squarely between the Royal Society, the Royal Society of Edinburgh and the Society of Literature, would point to the fact that he simply wanted to support the work of our learned society and its Fellowship: there are no posthumous appointments to the Royal Society.

So far, I have identified 30 individual volumes donated by Dircks which you can find by searching in our catalogue. I’ll continue chasing his ghost along the shelves, and perhaps report on more of the engineering and mathematical delights he has left behind in our collections. 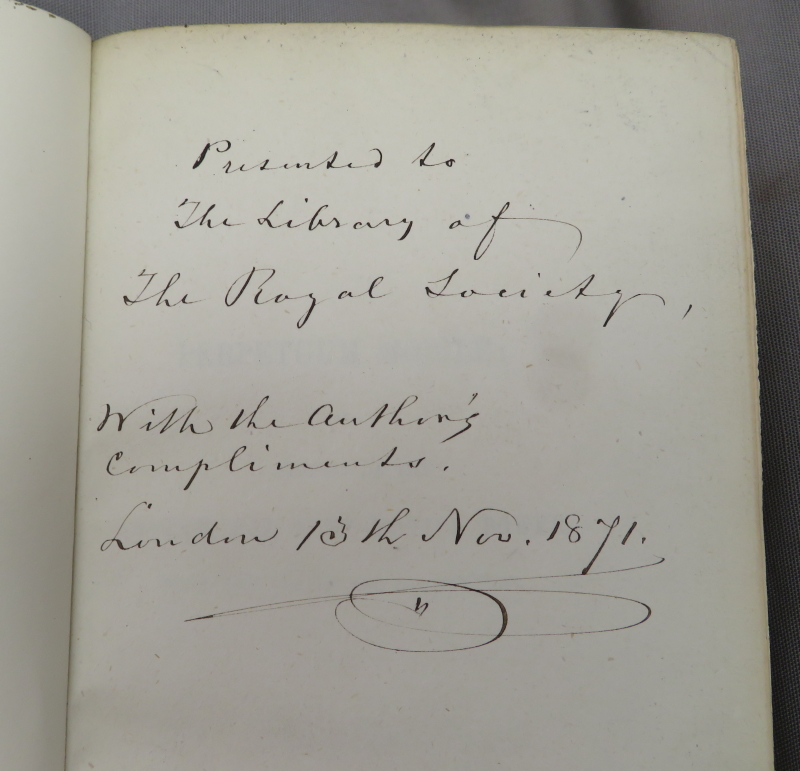